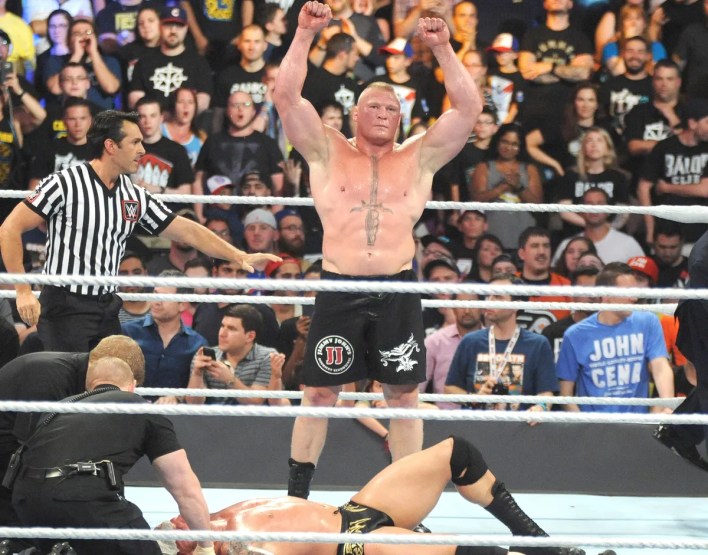 WWE will host its 2021 draft on this week’s episode of SmackDown and next week’s Monday Night Raw, and a number of the company’s biggest names could be on the move.

As WWE’s TV viewership continues to underwhelm after its TV partners were left disappointed following the release of major stars like Bray Wyatt, there is an immense amount of pressure on WWE to deliver stronger ratings and a better overall product as its war with new competitor AEW remains scorching hot. In the past, WWE has reportedly informed both FOX and USA Network of its intentions to draft certain major superstars only to have a last minute change of heart, an issue that has created mismatched rosters at times.

More recently, SmackDown has brought back the likes of both Becky Lynch and Brock Lesnar, further swaying the balance of star power in favor of the blue brand, which already boasts marquee names like Roman Reigns, Seth Rollins, Edge and Bianca Belair. The undeniable differences in quality between the well-booked SmackDown and the creatively-struggling Raw demonstrate WWE’s need to hit the reset button on its rosters as a whole, but more specifically, on the main event picture.

Here are five top stars WWE should move in the two-episode draft, which begins on tonight’s SmackDown on FOX.

After Finn Balor’s—or The Demon’s—loss to Reigns at Extreme Rules earlier this week, the only way for him to go on SmackDown is, well, down.

WWE’s creative team has had a bit of a love-hate relationship with Balor, who’s been booked like a top guy at times and just another guy at others even though he’s undeniably popular and has also proven to be a top merchandise seller. The crowd loves Balor, but he’s fighting an uphill battle on SmackDown, where Reigns appears set to reign supreme until WWE decides to launch a massive push for an up-and-coming superstar or bring back someone like The Rock.

With Balor’s room for advancement limited on Friday nights, he’d slide in nicely at the top of the card on Raw.

Following what transpired between Alexa Bliss and Charlotte Flair this week, Bliss is expected to take a lengthy hiatus due to an upcoming surgery and then get a character makeover that results in the talented superstar shedding her Wyatt-esque gimmick.

Bliss’s overall abilities as a performer—and especially on the microphone—are elite, and she’s long been pushed as one of the top stars not just in the women’s division but in the company as a whole. However, her macabre character has worn out its welcome without Wyatt around, even though her performances and portrayal of the character have been fantastic.

The fact remains that Bliss’s gimmick has a limited shelf life, just as her time on Raw does. Bliss has spent most of the past four years on the red brand, and it’s time for a change that will help freshen up the women’s division on both shows.

Banks’ attack on two of SmackDown’s top superstars has seemingly set the stage for a three-way feud for the blue brand’s top prize, but the rushed nature of this major rivalry suggests that at least one of those three stars is going to be leaving Friday nights. The best choice for that? Banks. Since Lynch just returned to SmackDown after well over a year off TV, it’s a safe bet that she’ll be sticking around while Belair appears to have some issues with Lynch that have yet to be settled.

WWE’s wisest move is to move Banks, a proven ratings draw, to the viewership-hungry Raw, which has had issues creating compelling feuds in the women’s division. With Lynch and Belair anchoring SmackDown, Banks should be the heart and soul of Raw’s women’s division moving forward.

Drew McIntyre seems to be eyeing Big E’s Universal Championship, but there have been plenty of rumblings that the Scottish superstar is SmackDown bound.

That’s the best possible path for McIntyre at the moment after he’s spent much of the past two years positioned as a top star and world title contender (or holder) on Monday nights. WWE has essentially exhausted all options for McIntyre on Raw, who has been exclusive to the red brand since returning to the main roster in 2018 and hasn’t had a compelling angle since his title feud with Bobby Lashley ended.

WWE fans have seen a number of main event-level talents, like Shinsuke Nakamura, get stuck in a rut when staying on one brand for too long, and that’s a mistake the company must avoid with an elite talent like McIntyre, who would make a great foe for Reigns on Friday nights.

WWE undoubtedly rushed into its ongoing Universal title program between Reigns and the recently returning Brock Lesnar, with arguably the top two stars in the men’s division set to face off at Crown Jewel in Saudi Arabia later this month.

That match is one that should have been held off until a show like Royal Rumble or WrestleMania, where it would have a big fight feel and receive a stronger crowd response. Alas, WWE has gotten antsy and rushed into Lesnar vs. Reigns, which could end up either setting up another future match between the two or serving as a way to have them go their separate ways.

It should be the latter, though. After all, WWE’s lack of commitment to long-term storylines suggests that keeping fans interested in this feud through WrestleMania, which is where this rivalry deserves to come to a head, would be extremely difficult. That means that Lesnar should be shipped over to Raw, which is in desperate need of a big name after the likes of Lesnar himself and Lynch recently landed on SmackDown alongside Reigns.

With WWE’s TV partners reportedly wanting top stars on their respective shows and WWE itself reportedly already deciding on where its top stars will land in the draft, the company needs to appease those partners by “spreading the wealth” and putting Lesnar on a Raw show that could really use his star power.