There is widespread concern for job losses at Derby County as the crisis-hit club prepare to enter administration, Sky Sports News have been told.

While some individual consultations happened on Monday, the bulk of the Derby workforce will be told on Tuesday what they can expect from the process.

With the club believed to be losing between £1.3m and £1.5m per month, administrators are expected to be appointed either on Tuesday or Wednesday with the priority of paying creditors and HMRC.

Owner Mel Morris, who claims to have spent over £200m of his own money in trying to get Derby into the Premier League, previously told Sky Sports News he is “devastated” over the situation.

Morris also cited the financial impact of Covid-19 and a string of failed takeover attempts as the cause of the mess and apologised to staff and supporters.

However, the EFL is said to be “disappointed” by the club’s comments about the pandemic, having offered them the same financial support as the rest of its 72 clubs.

On the pitch, Derby are facing an automatic 12-point deduction once they officially appoint an administrator.

The punishment could see Derby lose up to 21-points, with the club still in talks with the EFL over an alleged breaking of financial fair play rules.

Derby County currently sit 12th in the Championship with 10 points from their opening eight games. 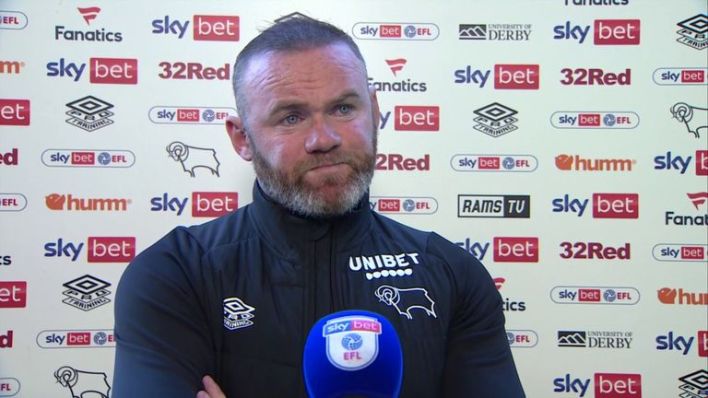 Wayne Rooney says he is ‘heart-broken’ for the Derby staff that are likely to lose their jobs as a result of the club’s plan to enter administration.

Neville: This can’t happen to a club like Derby

“We have got to stop this happening. When owners come into football clubs, there should be an obligation to be able to cover their obligations they sign up to. Until we have that in place, we’re going to continue to have big trouble.

“Examples like Derby will keep coming forward. We have had Bury, Macclesfield, Wigan, Bolton, all these clubs. It’s got to stop.

“I know there has been a fan-led review led by Tracey Crouch, she’s put recommendations forward, Oliver Dowden said he was going to support those recommendations, and I know Nadine Dorries [Secretary of State for Digital, Culture, Media and Sport] has just taken over from Oliver Dowden.

“We need to hear from Nadine Dorries that she’s going to support the recommendations to put an independent regulator in place to change rules in English football, to stop this happening.

“Derby are now in a perilous position. My hometown club were there three or four years ago. It has to stop.

“Now they may go out of business. That cannot happen to a football club and institution like Derby County.”

‘AJ should step aside to allow Fury vs Usyk’

‘AJ should step aside to allow Fury vs Usyk’