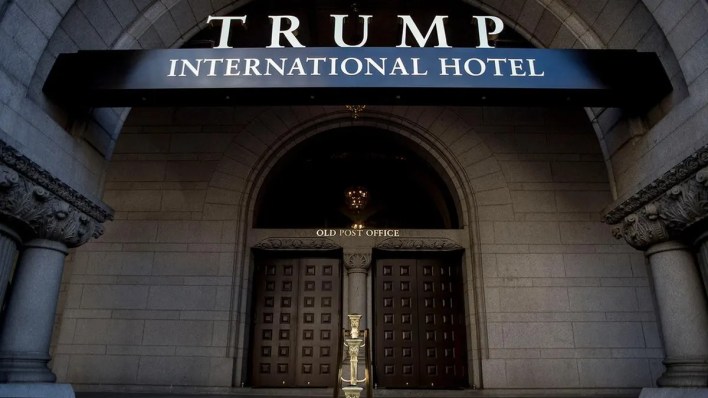 If someone really buys Trump’s hotel for $370 million, they will be bailing him out of an otherwise-disastrous deal. They might also be setting themselves up to lose millions.

Citing anonymous sources, the Wall Street Journal reported Tuesday that Donald Trump’s family business is nearing a deal to sell rights to its Washington, D.C. hotel for more than $370 million, with the final price potentially inching closer to $400 million. Which raises the question: Why would anyone pay that much for the former president’s property?

Two months ago, Forbes surveyed seven hospitality experts to see what they thought the hotel might fetch in a sale. At the time, it was difficult to tell how exactly profitable the business might be, although it seemed to be losing money. Without access to the hotel’s income statements, the experts agreed it made sense to value the business, which is a long-term lease to the hotel rather than the building itself, based on its number of rooms.

The estimates varied, but six of the seven fell somewhere between $400,000 and $775,000 “per key,” as industry veterans say, referring to the price per room. Given that the hotel has 263 rooms, that would suggest a total of $105 million to $204 million. The sources cited those figures before any of them saw the documents that a House Committee released last week, confirming that the hotel has been hemorrhaging money.

On Tuesday, some of those same sources were shaking their heads at the idea that the place might sell for $370 million. “I’m floored,” said Dan Wasiolek, a senior equity analyst at Morningstar who covers the hospitality industry. “For those financials, there’s no way that someone pays that per key, unless you just think this is like such an iconic location and building and must-have property—and even then, I mean, it still seems like a huge stretch.” Such a stretch, in fact, that Wasiolek was left wondering whether it was even true: “I find that hard to believe, to be honest with you.”

Local broker Bill Moyer suggested the highest valuation of any of the seven experts Forbes surveyed two months ago—$1 million per room, which would equate to $263 million total. A big fan of the hotel, Moyer said he just went there about 10 days ago. But even he found it difficult to get his head around a sales price in the neighborhood of $400 million. “Every time you think you know something, you find out you really don’t know anything because somebody comes along with completely stupid money and says, ‘You know, I like that hotel. I’m going to be a big shot in D.C., and I’m going to buy it,’” said Moyer. “From a business standpoint, I don’t think it’s viable that you’re going to make money at that number.”

After all, the property has been struggling to make money for years. Operating profits (measured as earnings before interest, taxes, depreciation and amortization) for the 12 months ending August 31, 2017 appeared to be negative $4.3 million, according to an analysis of the financial documents released by the House Committee on Oversight and Reform. The next year, things improved, but the Trumps still only squeezed out $900,000 of operating profits on $52.3 million in revenue, and they lost money after paying interest on their debt. A year after that, the property bled more, $2.1 million on an operating basis. Things got worse when Covid struck. In the year that ended August 31, 2020, the hotel produced an operating loss of $8.6 million. There are a lot of ways to lose money every year that don’t require investing $370 million up front.

It’s not that the property is worthless. The building is beautiful, and Donald Trump spent real money to renovate it into the sort of place that could awe any guest (and, evidently, some investors). Last month, with the country still struggling to hold off Covid, Forbes estimated it was worth $173 million. A local real estate player named Brian Friedman once offered $175 million for the hotel, but the Trump family turned him down. Told about the $370 million to $400 million range reported Tuesday, Friedman expressed surprise. “Oh my god,” he said. “I don’t believe it at all, but that would be amazing. There’s probably some stupid South American, Florida group, or there’s probably some seller financing or something—or side letter that we’ll never know about, because the asset loses money.”

At this point, there’s no hard evidence of seller financing or a side letter in the deal, and Forbes did not independently confirm that a deal is even happening. But according to the Journal and others who reported the news Tuesday, the prospective buyer is a Miami-based investment firm named CGI Merchant Group. A representative of CGI declined to comment. The Trump Organization did not reply to a request for comment. The real estate firm Newmark is reportedly handling the sale on behalf of the Trump Organization. Reached Tuesday, the firm’s D.C.-based co-head of lodging, Miles Spencer, offered a succinct response: “One big, fat ‘no comment.’”