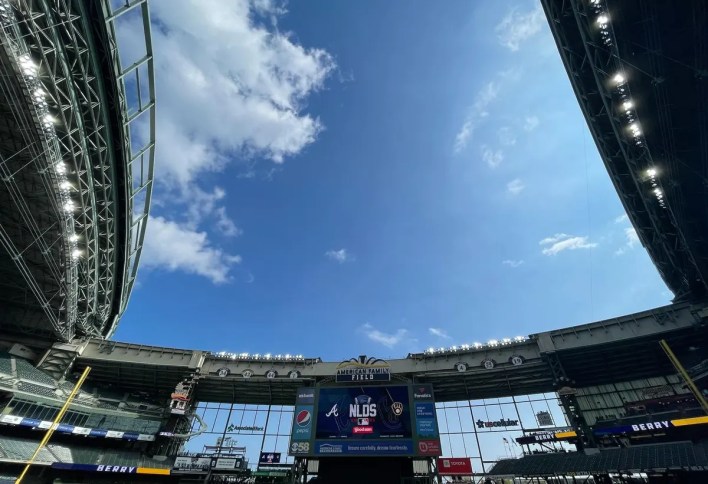 There’s an old saying in Wisconsin — actually, most of the Midwest — that if you don’t like the weather, just wait a few minutes.

Which helps explain why the American Family Field roof was closed Friday afternoon when the Milwaukee Brewers played host to the Atlanta Braves in Game 1 of the National League Division Series.

Originally, the forecast for the Milwaukee area Friday called for rain early in the morning with temperatures eventually reaching into mid-70s with noticeable humidity and a chance for isolated pop-up showers throughout the day.

By the time Corbin Burnes threw the game’s official first pitch at 3:39 p.m., it had turned into a beautiful fall day in Milwaukee: 74 degrees with relatively clear skies, an occasional light breeze.

Yet, the roof was closed and remained that way throughout the duration of the three-hour game, which Milwaukee won, 2-1, thanks to six shutout innings from Burnes and a two-run home run by Rowdy Tellez in the seventh.

Naturally, more than a few people took to social media to express their displeasure with the roof decision, wondering why fans had to miss out on fresh air on an otherwise delightful day.

“What they had told me yesterday that there was rain in the forecast at some point,” Brewers manager Craig Counsell said. “My wife asked me why the roof was closed after the game, too.”

The decision was not made by Counsell, the players or even team owner Mark Attanasio. While teams make the call on opening or closing the roof during regular season contests, Major League Baseball has the final say during the postseason and contrary to popular belief, it has nothing to do with the needs or desires of the league’s television or a means of generating noise and atmosphere.

Instead, those decisions — Friday’s included — are based primarily on the weather and that’s where the old cliche about Wisconsin’s fickle weather enters the discussion.

While the current conditions were, in fact, pleasant and ultimately remained that way for most of the evening, the possibility of that changing — quickly — remained likely throughout the evening, as well.

Sam Kuffel, a meteorologist at WDJT-TV in Milwaukee explains:

“The forecast called for isolated pop up showers throughout the afternoon and early evening,” Kuffel said. “There was no organized system triggering these — like a cold front typically will bring a line of rain or storms — so the nature of where the showers and storms popped up was random. There were several of these pop up showers and storms yesterday afternoon and evening around southeast Wisconsin, but not directly over the stadium.”

The key factors were the unseasonably warm temperatures and higher-than-usual levels of humidity for this time of year (the dew point in Milwaukee Friday at first pitch was 61 degrees) combined with sunshine. Anyone who’s spent time in Wisconsin during the summer knows that hot, sticky, sunny days usually lead to rain that seems to come out of nowhere as the atmosphere takes on more moisture than it can hold.

When that happens, the rain comes quickly and can often create quite a mess in less time than it takes for the roof to close completely which is why, despite Friday turning out to be one of the nicer October days Milwaukee has seen in a few years, the Brewers and Braves played under the roof.

“While it was nice at the ballpark, rain was never eliminated from (Friday’s) forecast,” Kuffel said.