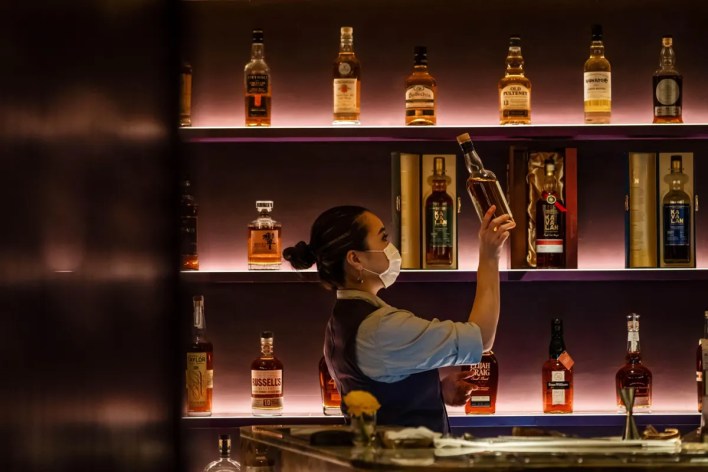 As the world was kept at home last year, alcohol markets did furiously well. But now that lockdown measures are mostly over normality should prevail, shouldn’t it? Not, it seems, for the rich.

“Spirits are on fire right now. They’re really growing at the premium through to the prestige end of the sector,” says Gerry Tosh, Rare Whisky director at The Dalmore distillery in Scotland.

The premium market starts at $100 a bottle and prestige $1,000, which gives you a rough idea of the people buying spirits right now. But many of today’s buyers go even further.

In June, for example, Sotheby’s sold 24 bottles of China’s popular Kweichow Moutai liquor for $1.4 million, smashing previous records for the spirit. This “totally and utterly shifted the market,” says Tosh.

Records are being set across the board, but mostly in Asia. China is a rapidly growing market for all spirits, but Scotch whiskey is chief among them. France and Taiwan are the biggest markets for Scotch, “but China and America are just behind them,” says Tosh. And it is the Chinese that whiskey distillers are watching closely.

“There’s a generational shift. The younger generation are starting to learn about whiskey,” says Thorsten Hartmann, director of IWSR, which tracks the global drinks industry. “These are emerging consumers who are starting to fall in love with whiskey. They might not have been exposed in the past but they’re definitely exposed now.”

At a recent Sotheby’s auction of whiskey and rare spirits, 80% of buyers were Asian and 60% were under the age of 40.

“There are guys in Asia who have really raised the bar when it comes to whiskey tasting and tickets for these tastings are sometimes tens of thousands of dollars and they’re opening all sorts of bottles,” says Jonny Fowle, senior spirits specialist at Sotheby’s. “It’s pretty regular that in people’s homes they’re opening bottles up to and exceeding $50,000 per bottle.”

Like wine tasting parties before them, expensive whiskey is being sought both to drink and show off. “There is definitely an element to conspicuous consumption, showing off your wealth,” says Hartmann.

It is the very opposite to what has taken place in western markets during the past year. Lockdown sent the whiskey market wild in the U.K. and U.S. as wealthy connoisseurs, either consoling themselves or just bored at home, started drinking their rare whiskey collections like never before. Of course, they then had to replenish them.

While that abrupt consumption might have slowed, the market has not. Investors realize that if more rich young Asians discover a love for whiskey the market is only going to grow further.

“We’re still in the early days of the single malt renaissance,” says Tosh, referring to the market for single origin rather than blended whiskeys. Whether or not this is your tipple of choice the market is open to outside investors as well.

For around £3,000 ($4,122) you can buy a cask (barrel) of Scotch whiskey as an investment. “Given the current growth rates you should be able to make profits straight away,” says Jonathan Hook, founder of MacInnes Whisky, a whiskey investment company. “But after you pass the 15 year mark the gains go up quite a bit.”

The idea behind buying a cask as opposed to a bottle is becoming increasingly common. “If you bottle a wine it appreciates. With whiskey, once you move it out of a cask and into a bottle, on the whole, the flavor doesn’t improve,” says Hook.

But when the time is right for bottling you can either sell the cask as a whole or have it bottled and sell those instead.

That is not to say bottles do not increase in price as well. Whiskey houses have recently commissioned artists and architects to decorate limited edition bottles.

Architect Sir David Adjaye designed a decanter and case for the oldest single malt Scotch whiskey ever to be bottled, an 80-year-old Glenlivet. These bottles are due to be auctioned at Sotheby’s in London next month.

But the single biggest reason behind the increase in the whiskey market is that people keep drinking it. As long as this continues, says Hartmann, there will be a growing market: “Consumption is a very important element of whiskey collecting that we have to propagate in order to be able to develop the market.”