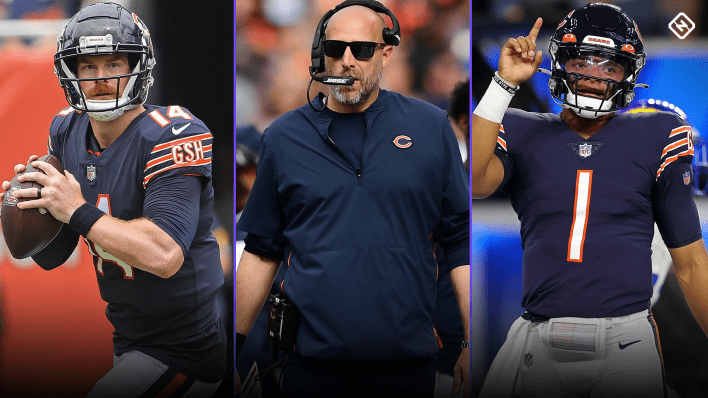 Chicago will start its rookie QB for a second straight game.

According to ESPN’s Adam Schefter, Justin Fields will be the starter for the Bears when they host the 0-3 Lions on Sunday.

Bears’ QB Justin Fields will start Sunday vs. the Lions.

Fields made the start last week against Cleveland and completed 6-of-20 passes for 68 yards, struggling against constant pressure from the Browns that saw him sacked nine times.

NFL PICKS: Against the spread | Straight up

Nagy had previously said the decision would be a gametime decision, having previously only said it wouldn’t be Nick Foles.

“The starter is going to be a game-time decision,” Nagy said. “Both [were] out there this week for practices and you know Andy is getting better each day. We’re just going to see where he’s at on Sunday.”

Dalton is dealing with a bone bruise that kept him out of last week’s 26-6 loss to the Bears. He has logged limited outings at each of the team’s practices this week. He is officially listed as “questionable” for the game, so it’s unknown whether he’ll be healthy enough to play.

Nagy has repeatedly stated that Fields is dealing with a hand injury, but he hasn’t appeared on the injury report this week. And when asked about it after his first start, he said “it’s fine.”

Nagy was also asked whether he had multiple game plans in place for the game depending on whether Dalton or Fields starts.

“I think we feel good right now with where we’re at with the game plans,” Nagy responded with an emphasis on the “s” in “game plans.”

That said, Nagy wouldn’t reveal who would call plays for the Bears against the Lions. He held the responsibilities to begin the season, but last season, he gave the play-calling responsibilities to offensive coordinator Bill Lazor from Weeks 10 to 16 last season after the Bears’ offense had some issues. Perhaps Lazor could again take over after Nagy’s offense posted one net passing yard last week.

The Bears will reveal their master plan soon enough, but until Sunday, Chicago fans will be left wondering what exactly the team is planning for Week 4.