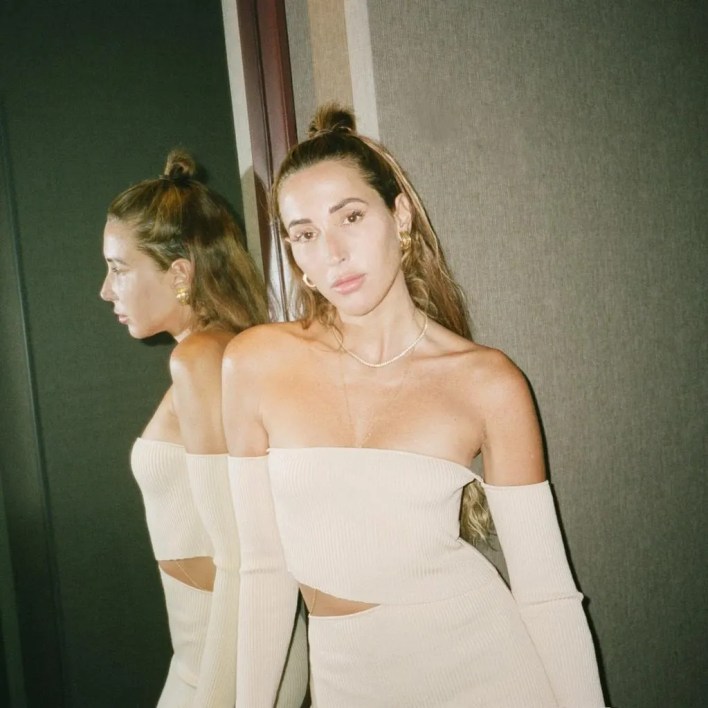 Designer and founder Ronny Kobo has never taken the predictable route when it came to building her namesake brand. While other fashion labels might take a more subdued approach to style, Ronny Kobo’s timeless designs, sophisticated silhouettes and standout prints are all about dialing up the glamour and garnering attention — the best kind of attention.

Since launching her brand in 2017, Ronny Kobo’s approach to style has won over fashion editors, “It girls,” influencers, celebrities, and globe-trotting women.

Kobo’s globally-minded attitude can be traced back to her roots and upbringing: she was born in Tel Aviv and raised in Hong Kong, before settling down in New York City, where she is currently based.

When the pandemic hit in March 2020, Ronny Kobo the brand was still riding the wave after a monumental showing at Paris Fashion Week the previous year, where her unconventional decision to show in Paris despite not being a traditional “haute couture” label was a bold move.

But as they say, fortune favors the bold.

Kobo took a risk and decided to show for her first fashion show at Paris Fashion Week in 2019.

“I didn’t allow the fear of not being considered a ‘high fashion’ designer stop me,” Kobo explains. “Who says that I can’t participate in Paris Fashion Week? My brand is for the fashion girl, but in a cheerful, happy, approachable way. And the response I got really made my business grow fast, because it was the first time that I put my brand on the global runway, so to speak, and started it as ‘affordable luxury’. Which meant that now the fashion retailers who were buying very expensive fashion brands, were also buying Ronny Kobo.”

That moment in early 2019 represented the pinnacle of Kobo’s ascent in the fashion leagues.

“People that I respected, who I viewed as aspirational, were now coming into my showroom and the women that I designed for were no longer ‘out of reach’ — they were actually women I was communicating with directly.”

When the pandemic hit in March 2020, it forced many fashion brands to choose which direction to focus on, in terms of styling and commodities. As evidenced by the flurry of “stay-at-home” looks posted on social media, many labels doubled down on athleisure, leisurewear and cozy attire. Comfort became the dominant quarantine and Zoom dress code, with tie-dye sweats and sets leading the way. While most fashion brands jumped on the work-from-home bandwagon, Kobo intentionally decided to resist that approach.

If you haven’t already sensed this, take note: when it comes to Kobo and her brand of elevated, affordable luxury, expect the unexpected.

“During the pandemic, the only place we were going out at night was restaurants, for outdoor dining. This was before indoor dining was permitted. So I thought, how do I showcase a night out in a coat where your look can still exude a lot of attitude, some swag, and a lot of personality?”

The decision to not produce a “Ronny Kobo stay-at-home” collection was based on intention, thoughtfulness, and almost a rebellion against the status quo and the predictable. Kobo, whose brand and line is tailored and designed for the woman who wants to be noticed in the crowd, saw the ensuing “new normal” as an opportunity to create a new product category: outerwear.

To Kobo, coats create a fashion moment for her woman — and she designed them with the fit, silhouette and high-quality fabrics that are up to par with coats in the $3000 to $4000 category, for a more price-inclusive range of $500 to $700.

Kobo’s jackets and coats are tailored for women who want to dial up the drama while out and about. The designer is helping to usher in a return to glamour — but let’s not call it a comeback.

The brand is also committed to making waves when it comes to New York Fashion Week and market weeks, consistently doing the unexpected and pushing the envelope.

Ronny Kobo was one of the brands at Revolve’s buzz-making presentation at this year’s New York Fashion Week in September, which garnered a lot of social media attention. For Kobo, as for many of us, the pandemic was a highly reflective period of looking inward — and it was also a time when Kobo dug deep and designed her newest commodity: coats.

“I thought, How do I create a room that’s about reflection and looking at yourself, while still making it a fashion forward moment? So it was pretty clear to me that I needed to create a room of mirrors.” Kobo explains.

It was also really important to showcase Ronny Kobo’s coats and how outerwear can have attitude and be sexy — basically still represent that ‘Ronny Kobo’ state of mind.

The common thread in Kobo’s career is her prowess as a storyteller — whether creating campaigns and collections or producing runway shows and activations. Although she grew up surrounded by fashion — her father had a denim manufacturing business in Hong Kong and her grandmother was a shirt designer and producer, who sold shirts after the Holocaust, Kobo always wanted to pursue journalism.

“As a child, I was constantly inspired by all of the cool, trendy, fashionable New York designers who came to Hong Kong on business trips,” Kobo shares. “Fashion and tailoring was always a language that I spoke — I was fluent in fashion and products.”

Her innate interest in fine art, travel and culture eventually led her to New York City, where she graduated with an undergrad in literature and a Master’s degree from NYU, in cultural anthropology and media.

Kobo started designing and making tapestry handbags, which took off and were picked up by retailers like Intermix. That led to her making T-shirts — “none of it was very strategic, because I was just doing it for fun, to make some money on the side while I was in school.” The T-shirt brand eventually launched as “Torn by Ronny Kobo” — and while it didn’t last, the lessons certainly did: “It really blew up fast — too fast. I couldn’t keep up with the inventory counts and the margins. You know, failing is probably the best education you could ever have.”

So Kobo launched Ronny Kobo — her brand aimed at “redefining the modern woman” — in 2017, with a more elevated focus and as she affirms, “now with a lot more experience.”

Next up for Kobo? Handbags, accessories and swimsuits for the woman with forever-wanderlust.

But in the immediate future, holiday:

“The Ronny Kobo brand is a state of mind and it is a lifestyle. So how can I provide her looks, for her desired lifestyle? How is she depending on me? We growing our website and our direct-to-consumer platform, which is rapidly growing. I want to be able to say to that woman, ‘I’m not underestimating you. Don’t underestimate me.”

Hunter’s Moon: Exactly When, Where And How You Can See Fall’s First Magical Moonrise