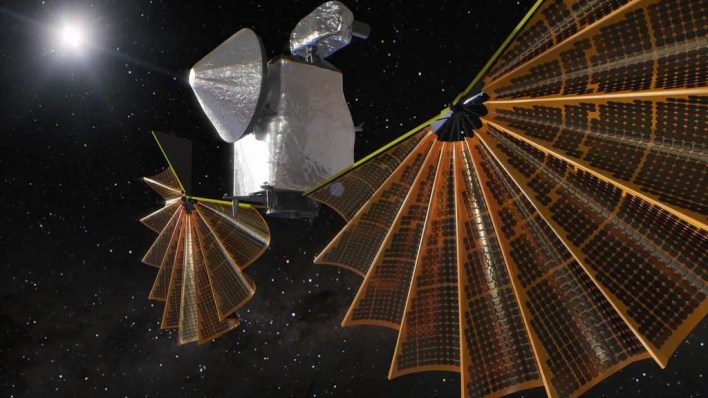 Where will you be when NASA’s “Lucy” spacecraft launches this weekend?

NASA is about to launch what is sure to be an era-defining space mission that will, over the next 12 years, take turns in visiting no fewer than eight mysterious asteroids—and revealing the Solar System’s distant past.

The first-ever spacecraft to explore Jupiter’s so-called Trojan asteroids—ancient remnants of the early Solar System clustered in two “swarms” leading and following Jupiter in its path around the Sun—NASA engineers are now packing the $450 million “Discovery”-class spacecraft into a capsule for a launch scheduled for early on Saturday, October 16.

Here’s everything you need to known about NASA’s Lucy Mission, when it will launch, and where to watch it all live:

When and where to watch the NASA ‘Lucy’ launch live

“Lucy’s” launch window begins at 5:34 a.m. EDT on Saturday, October 16, 2021. It will launch on top of an Atlas V rocket from NASA’s Kennedy Space Center in Florida and be carried outside Earth’s atmosphere to begin its long journey.

If there’s bad weather or technical issues then there are more launch opportunities on Sunday, October 17, 2021.

Live launch coverage will begin at 5 a.m. EDT streaming live on NASA TV on YouTube, the NASA app, and the agency’s website.

What is a Trojan asteroid and why is NASA sending ‘Lucy?’

“Lucy” will be the first-ever mission to explore what are known as the “Trojan” asteroids. These small objects orbit the Sun in two clumps, some in front of Jupiter and some behind it; they’re often called “Jupiter’s children.”

Trojans are considered to be primeval leftovers—fossils—from the formation and evolution of the planets and the Solar System. From the spacecraft’s close-ups scientists hope to learn more about the origins of Earth’s organic material, how the Solar System’s planets formed 4.5 billion years ago, and why they ended up in their current configuration.

“With Lucy, we’re going to eight never-before-seen asteroids in 12 years with a single spacecraft,” said Tom Statler, Lucy project scientist at NASA Headquarters in Washington. “This is a fantastic opportunity for discovery as we probe into our Solar System’s distant past.”

Where will NASA’s Lucy spacecraft go and when?

Its 12-year mission—which will include it circling back to Earth three times for gravity assists—will go something like this:

Why is the mission called ‘Lucy?’

It’s named after the fossilized skeleton of an early hominin (pre-human ancestor) discovered in Ethiopia in 1974 and named “Lucy” by the team of paleoanthropologists who discovered it. The fossil gave scientists insights into humanity’s evolution—and that’s exactly what NASA is hoping Trojan asteroids will do for our understanding of the early Solar System.