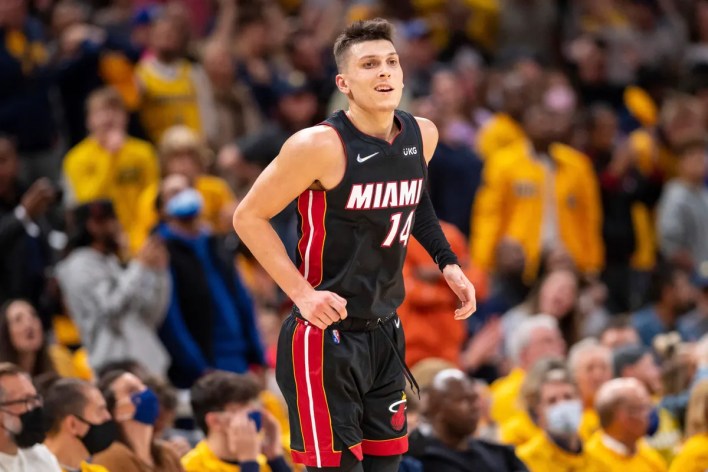 Somewhere in between the Snarl and the sweep, things began to turn for Tyler Herro, the Miami Heat guard that just started his third season in the NBA. As a rookie from the University of Kentucky, he exceeded the expectations of a late-lottery draft pick. He showed a willingness to take clutch shots – and the ability to knock those down – and was a valuable contributor to a team that itself exceeded expectations by reaching the NBA Finals in Orlando.

That seems as likely a starting point as any for when things started going wrong for Herro. Miami’s run in the Orlando “bubble” changed the team’s timeline completely. The plan after adding Jimmy Butler in 2019 was to build more slowly, bank on internal development of young players and look to add a superstar in the 2021 offseason. But a Finals run changed that; they were further along than expected, but not in the top-tier of Eastern Conference teams, at least in terms of overall talent.

In the short between between Orlando and the start of the 2020-2021 season, they had to choose a path. Several contributing players were entering free agency. Miami looked to retain them on one-year deals. That way, the team could reload for another improbable run while still maintaining flexibility for 2021, when players like Giannis Antetokounmpo or Kawhi Leonard could be entering free agency. It was a risky move.

And it didn’t work.

A team that had peaked earlier than expected, that thrived on team chemistry and defensive versatility, lost key players that had contributed both tangibly and intangibly to that success.

As for Herro, his chances of evolving in between his first and second year were hindered by the shortened offseason. His role, too, was in a state of flux. Herro started the first 10 games of the season, missed time with injury, started four games and would resume a bench role for the rest of season. Herro’s name was linked in the trade rumor du jour, from James Harden to Victor Oladipo to Kyle Lowry. Miami’s roster, like 29 others around the league, would also be impacted by COVID-19 and injury, and consistency was unlikely to be built on a foundation inherently designed to crumble.

Herro’s production was mostly fine last season. While his 3-point shooting dipped between Year 1 and 2 (from 38.9 to 36.0 percent), he also improved from everywhere else on the floor, while also making strides as an occasional playmaker and surprisingly good rebounder. There’s obvious weaknesses, mostly defensively, but those were evident as a rookie and yet fans appreciated Herro despite them.

The offseason represented a turning point for Herro. The coaching staff tasked him with a goal to put on weight, to better absorb contract as he made his occasional forays toward the rim and to improve on his defensive limitations. He achieved that goal, reporting to camp this year looking noticeably stronger.

Through the first two games of the regular season, the work has clearly played off. Herro is currently ranked 8th in the NBA in total scoring at 28.5 points per game, providing a needed boost off the bench for a team that many pundits believed would struggle offensively. His long-range shooting is still less-than-ideal (at 35.0 percent on 10 attempts per game), but Herro has grown comfortable with his role as the team’s Sixth Man.

Herro has been quick to point to Miami’s addition of Lowry as a reason for his growth but on Oct. 23, in an overtime loss to the Indiana Pacers, Lowry sat out the game and Herro still notched 30 points to lead the team. This was the Herro that Heat fans had grown to appreciate, sure of himself and willing to create points for himself when Miami’s offense struggled without Lowry’s on-the-floor guidance.

This is the role that seems best suited for Herro, even if fans struggle to understand it’s significance. Miami’s is once again on a championship track. The addition of Lowry and P.J. Tucker are win-now moves with little regard for the future. They provide defensive versatility, veteran leadership and championship experience. Butler and Bam Adebayo, the team’s star duo, area All-NBA defenders, underrated playmakers and capable scorers. If there’s a concern there, it’s that they do everything well and are expected to carry a heavier load.

Herro, for his part, just has to be what he’s been most effective in his brief NBA tenure; a bucket getter that doesn’t make too many mistakes in other aspects of the game. The disconnect with how important Herro’s role is lies in the contrast with his more accomplished teammates. On a team built on versatility, both offensively and defensively, Herro’s greatest strength is perceived as a weakness.

But the reality is that Herro, at least for this season, doesn’t have to be a multi-dimensional star. While fans and outside observers question whether the Heat should look to trade Herro, consider what might any deal might net in return. Of the superstars most frequently rumored to be involved in proposed trades – Damian Lillard? Bradley Beal? – which one would provide the same value as Herro? While those stars would be an upgrade, the cost of acquiring them is beyond what Miami can reasonably afford.

And for those still focused on Miami’s inability to acquire Harden in a trade last season, reports are pretty clear that it had nothing to do with the team’s unwillingness to include Herro in the deal but rather that they just lacked sufficient draft capital to make a palatable deal for the Rockets.

Miami wisely held onto Herro rather than include him in a reported mid-season trade to acquire Lowry that obviously fell through. Just months later, Lowry and Herro are both on the roster, as is Duncan Robinson (who was also rumored to be on Toronto’s wish list).

Herro may or may not expand his role, or become an All-Star. Those questions can wait. For now, at just 21 years old and as a potent scorer, his role on a veteran-laden team is clearly defined and he is thriving in it.

He is exactly where and what he should be.

How To Master The Art Of High-Converting Sales Funnels

How To Master The Art Of High-Converting Sales Funnels