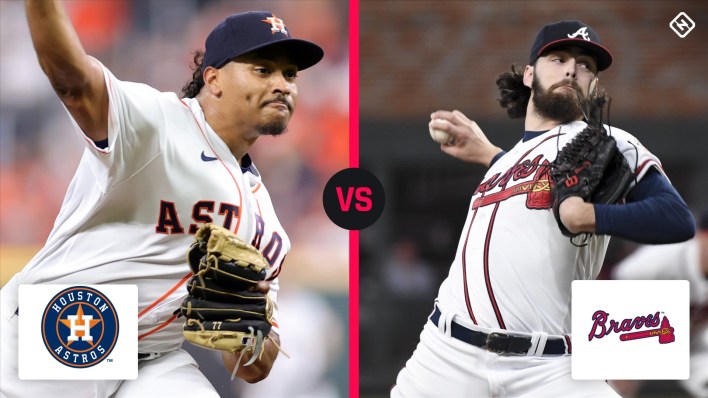 The Braves have commanded the postseason at Truist Field. They are a perfect 5-0 at home in 2021 and they went 4-0 at home in the 2020 playoffs.

Now, the Astros will have to try to puncture that perfect record as the next three games held in Atlanta could deliver the Braves a World Series title in a sweep. And it starts with Game 3 on Friday.

The Braves and Astros traded big wins in Games 1 and 2 as the Braves ran out to five unanswered runs in the first game of the series to take a 1-0 lead before the Astros outscored the Braves 5-1 in the first three innings in the second game to ultimately win 7-2 and tie the series.

It will be a matchup of standout rookies in Game 3, with Houston turning to Luis Garcia and the Braves going with Ian Anderson. Garcia finished the 2021 regular season with a 3.30 ERA in 155.1 innings. After a pair of rough outings to start the postseason, Garcia was outstanding in Game 6 of the ALCS to lead Houston to the series win as he pitched 5.2 shutout innings, allowing just one hit and one walk while punching out seven.

Anderson built off a breakout postseason in 2020 with a 3.58 ERA in 128.1 innings during the regular season this year, and he’s continued his playoff dominance in his first three starts. In three starts, he’s pitched 12 innings and has posted a 2.25 ERA on nine hits and four walks. He has struck out 12.

Below is everything to know about the TV schedule for the third game of the World Series:

The first pitch between the Astros and Braves is set for 8:09 p.m. ET on Friday.

MORE: The inside story of how the Braves and Twins saved the best parts of the 1991 World Series for after it was over

What channel is Astros vs. Braves on tonight?

All the World Series games will be broadcast on Fox in the United States, and on Sportsnet in Canada. On the Fox broadcast, Joe Buck will handle play-by-play with John Smoltz providing analysis in the booth and reporters Ken Rosenthal and Tom Verducci at field level.

Streamers can find the game on the Fox Sports Go app, or by using fuboTV, which comes with a seven-day free trial.

MORE: Charlie Morton adds gutty effort to his October legacy, but how will Braves replace him?

The World Series started on Tuesday with two games, and now the series moves to three in Atlanta. Should the game warrant a sixth and seventh game, those final two matchups would be back in Houston.

There will be off days for travel between Games 5 and 6.

Is PlayStation’s next big exclusive a Star Wars game by Quantic Dream?

Is PlayStation’s next big exclusive a Star Wars game by Quantic Dream?

'I'm stronger than ever': Hamilton opens up on new F1 'drive'

NBA awards race: Predictions for MVP, Rookie of the Year and others through first quarter of 2021-22 season