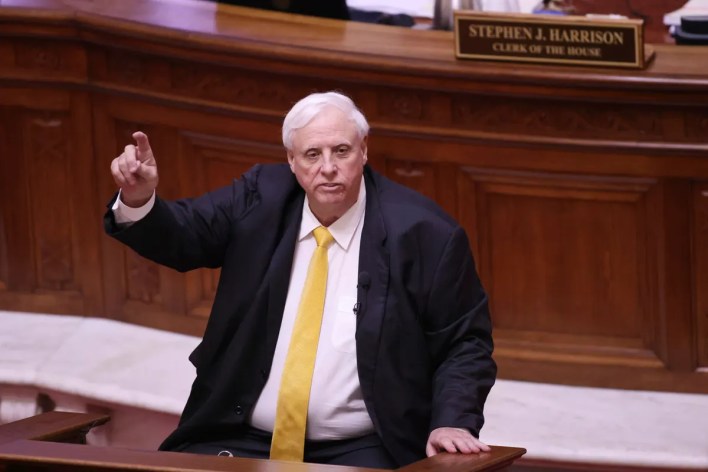 One of the knocks against West Virginia’s Governor Jim Justice is that he does the job part-time. He tends to the state’s business from the Greenbrier Resort in his home in Lewisburg, West Virginia — not the state capitol — when he’s not dealing with his troubled coal business. And that’s much of the time these days.

To get out from under the mess, Governor Justice is offering to pay one of his debtors — Credit Suisse — $300 million and half the value of his family’s coal business, called Bluestone Resources Inc., which mines metallurgical coal used to make steel. That’s according to a Wall Street Journal report, which says the governor’s problems started mounting when the original lender Greensill declared bankruptcy in March. Doing the math here, the original loan was for $850 million, all personally guaranteed by the family. But no one can adequately gauge the value of his battered coal business. The governor does own the Greenbrier Resort, which he says is worth $1 billion.

This reporter has placed a call into the New York-based PR team that handles Governor Justice’s private matters. As of the publishing of this story, it has not returned the call. However, the Epsilon Theory site questions the whole business design between Bluestone and Greensill, which is not a traditional lender but one that makes loans based on a company’s accounts receivables — like a payday lender does for workers who want to collect before their check arrives.

Here’s how the setup works, as described by Forbes: Companies may have to wait as much as 90 days to get paid. Enter U.K.-based Greensill, which would make loans and then collect the revenues when they arrive, plus fees and interest. Those same loans were packaged together and sold to institutional investors, including Credit Suisse that had invested $10 billion in the company. So did Softbank Vision Fund, which put in $1.9 billion. But it never added up. And thus, Greensill lost its insurance coverage provided by Tokyo Marine before it went belly up.

But then, according to the Epsilon site, things turned shady: Governor Justice had disclosed in a lawsuit that his company, Bluestone, still got loans from Greensill. How? Greensill would invent fake orders from fake customers, for which Greensill was paid interest and fees on the subsequent loans. The governor says that he has already paid $130 million to Greensill on those questionable loans. That leaves $720 million to pay off. Ben Hunt from Epsilon says it could be tantamount to “bank fraud.”

“They make up these prospective receivables to borrow against because nobody would give them against their actual business,” writes Hunt.

Greensill, according to the Wall Street Journal, sold Bluestone’s loans to Credit Suisse. As for Credit Suisse, it says that it is doing everything possible to collect the monies owed to it — about $700 million.

The history: In 2009, coal magnate Jim Justice sold Bluestone to Russian metals and mining business, Mechel. Mechel paid $400 million in addition to assuming $132 million in debt. Six years later, Jim Justice bought back the business for $5 million plus royalties on all coal sales and 10% of any future sale of the company.

Well, things have gone from bad to worse for the coal business since Jim Justice was first elected to the governorship in 2016, as a Democrat. (In 2020, he ran as a Republican and won.) U.S. coal production fell by 20% in 2020, the U.S. Energy Information Administration says. And while there will be an uptick in production this year, it is expected to be short-lived: coal is about 23.5% of the electricity mix now but it is predicted to be 22% in 2022. In 2007, coal made up half the electric generation portfolio. The reason for the brighter 2021 outlook is because of rising natural gas prices and greater demand from China.

As for Governor Justice’s relationship with Greensill, he calls it a “bait-and-switch.” That is, the governor said the loans were never about fake receivables from fake companies; rather, they were about Bluestone’s business prospects — a company that produced much-needed metallurgical coal for steel. To that end, Blustone’s customers were also Greensill’s biggest clients, including GFG Alliance. The business deal thus made good sense at the time.

“You know we got the rug just jerked out from right underneath us with the Greensill folks,” Justice said at a news briefing today and reported by the Charleston Gazette-Mail. “I said it over and over — bad actors, very bad actors. With that, we had to work through a whole bunch of stuff. I think it would be very premature for me to have a whole lot of comment on it.”

This ordeal is more than a distraction for Governor Justice. It reinforces the idea that he is more concerned with his business affairs than he is in governing the state — that living in the governor’s mansion would disrupt his primary interest. The situation also helps highlight the moniker that Forbes has given him: The Deadbeat Billionaire. That title, though, is now passé. The publisher says that he’s no longer a billionaire given all of his financial troubles — a predicament that will eat into his role as West Virginia’s chief executive officer.

Chrissy Teigen Brings the Va-Va-Voom in Not One, But Two Risqué Looks in New York City