St Helens youngster Welsby is able to keep his feet on the ground despite success early in his career; watch Saints take on Catalans Dragons in the Super League Grand Final at Old Trafford, live on Sky Sports Arena from 4.30pm on Saturday (kick-off 6pm)

Jack Welsby could perhaps be forgiven if he allowed himself to think success comes naturally in rugby league, given the start he has had to his professional career with St Helens.

At the age of 20, Welsby already has a Super League Grand Final winners’ ring and a Challenge Cup winners’ medal in the bag and is aiming for another Grand Final triumph on Saturday when Saints take on Catalans Dragons.

Given the way he has made such an impact at a young age in Super League over the past two seasons though, it should come as no surprise the former Shevington and Blackbrook junior is able to keep his feet firmly on the ground.

“I think [staying grounded] does come quite easily,” Welsby said. “You just have to look at the people around you like Jonny Lomax and James Roby.

“I think Robes has had a massive gap from the last trophy he won to the next Grand Final we won, so it’s pretty easy to stay grounded around those boys.

“It doesn’t get much better than what I’ve had. I’ve come into a superb Saints side and managed to get a spot in there now, so it’s been perfect for me and perfect for the lads as well.

“There are a lot of boys who deserve everything they’re getting at the minute and hopefully we can add another one to the list on Saturday.”

That sort of level-headed temperament has undoubtedly been key in Welsby seemingly taking the step up from academy rugby league to senior level in his stride, earning the accolade of Super League’s young player of the year for 2021, as well as rise to being asked to play in multiple positions by head coach Kristian Woolf.

Seen as a long-term replacement for Hull Kingston Rovers-bound full-back Lachlan Coote and also being comfortable in the halves, Welsby has regularly been deployed on the wing or in the centre by Woolf in an effort to further his knowledge of what players around him require from their No 1 and half-backs.

Standing at 6ft 2in and weighing 14 stone, he has even been used off the interchange bench in place of loose forward Morgan Knowles and Welsby has relished taking on that more physical role in the pack too.

“I think it’s good and I enjoy it,” Welsby said, adding: “I get to see more of the ball than I do at centre or wing. It doesn’t get much better than what I’ve had. I’ve come into a superb Saints side and managed to get a spot in there now, so it’s been perfect for me and perfect for the lads as well.

“Obviously at half-back or full-back you’re the playmaker so you’re going to see the most ball, but at 13 I can get my hands on the ball and play almost like another half-back.

“Especially with the position I’m looking at playing in either half-back or full-back, to know what you want from your other players and knowing how they have to do it or how hard it is for them to do it, it gives you an understanding of the whole game.

“I think I’m really lucky to have had the opportunity to even play in this Saints outfit, never mind playing in other positions, so it can only stand me in good stead for the future.”

Although very much in the St Helens camp now, it was watching old rivals Wigan Warriors defeat them 22-10 in the 2010 Grand Final which sparked Welsby’s enthusiasm for rugby league and desire to one day be playing at that level. 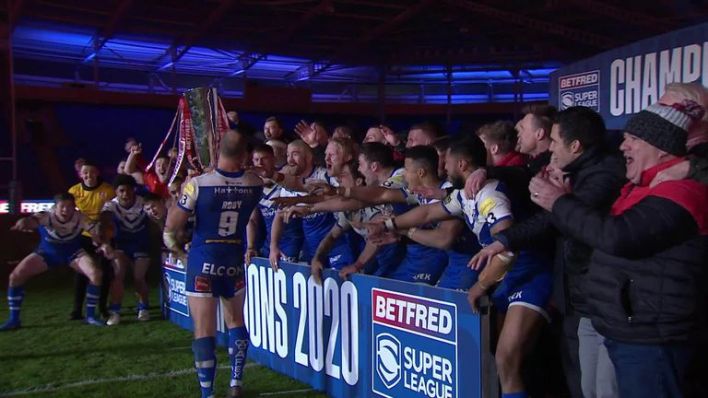 Nine years later he was in the crowd at Old Trafford as Saints saw off Salford Red Devils 23-6 and in 2020 ensured he will be synonymous with that match as long as rugby league is played by scoring the decisive try in the dying second against Wigan at the KCOM Stadium.

That match being in Hull and behind closed doors as a consequence of the Covid-19 pandemic means this Saturday’s showdown with Catalans at the Grand Final’s traditional Old Trafford home will be his first experience of that atmosphere as a player.

But the lessons learnt from being part of both last year’s tense 8-4 win and the victory over Castleford Tigers at Wembley in the Challenge Cup final earlier this year will still serve Welsby well.

“Experience in those big games is priceless,” Welsby said. “They’re all going to be different, but once you’ve played in one you know what you need to do and how hard you’re going to have to work.

“Everyone who reaches the Grand Final is going to be a skilful team, so it’s just about staying in the grind and working as hard as you possibly can for your mate next to you.

“That’s something you can only learn from playing in the big games and, thankfully, at a young age I’ve been able to play in quite a few of them.

“I like to think I’ve got myself in a good position to know what I’m doing and hopefully we can kick on again.”

Watch a special feature with Jack Welsby talking to Terry O’Connor as part of the build-up to this year’s Super League Grand Final on Saturday, live on Sky Sports Arena from 4.30pm and Sky Sports Main Event from 5pm.

How do riots work in GTA San Andreas?

How do riots work in GTA San Andreas?

Tyson Fury vs. Deontay Wilder 3: A timeline to the trilogy