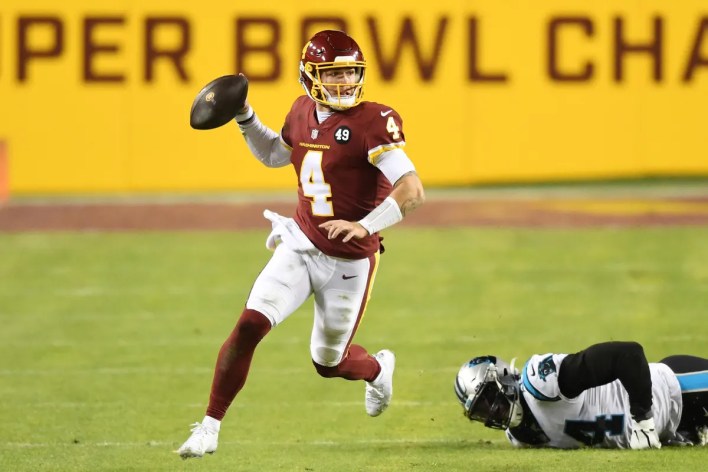 When Washington Football Team quarterback Taylor Heinicke dove into the pylon for an eight-yard rushing touchdown against the Tampa Bay Buccaneers in the 2021 Wild Card game, it felt like a fluke.

The play has become a popular one on highlight reels. It’s third-and-five in the third quarter and Washington is trailing the Bucs by eight. Facing pressure, Heinicke turns to his left and runs down the sideline. Seeing the incoming Tampa Bay defenders, Heinicke lunges, knocks over the pylon and throws his arms into the air to signal what the referees would soon confirm: touchdown.

Heinicke’s heroics were enough to earn him a two-year contract this past offseason. But following the signing of journeyman QB Ryan Fitzpatrick, Heinicke assumed the role of backup and his playoff magic soon became nothing but a memory.

But in the wake of a hip injury to Fitzpatrick in Week 1, the 28-year-old Heinicke was named the starter under center. He has shown that he can run when he has to, accumulating 20 rushes for 87 yards, and he has only been sacked three times. In the air, Heinicke has 960 yards on 118 attempts while leading the Football Team to a 2-1 record in his three starts.

The numbers do not tell the full story though. The inexperienced QB who had just one regular-season NFL start entering this season has proven that his decision to dive into the pylon was not an accident. Through three weeks of play, Heinicke has led the Football Team down the field on two game-winning drives, narrowly defeating the New York Giants, 30-29, and the Atlanta Falcons, 34-30. His run game illustrates his elusiveness and his passing game provides insight into his decision-making ability.

Not only can Heinicke play a football game, but he can manage one. For a franchise that has seen nine different starting quarterbacks since the start of 2018, Heinicke brings a moxie and security to the position that has long been missing.

“Even when he’s scrambling around, his eyes stay downfield,” said wide receiver Terry McLaurin. “He knows that he could give us opportunities to make plays down the field as well. Can’t say enough about him, the way he extends plays, the way he gives us a chance one each and every play. It’s like, no play’s ever dead when Taylor’s back there.”

“You never know what you’re going to get back there with Taylor,” added fellow receiver DeAndre Carter. “He’s going to run around, he’s going to make plays. We just try to get in there, you know, on the scramble drill, try to be open and be an available target for him when he was ready to throw.”

Of course, Heinicke makes mistakes. He lobbed one touchdown throw to McLaurin Sunday that could have been intercepted. He has also received help in each of the game-winning drives he has led. An offsides penalty on the Giants on the final play of the game gave Dustin Hopkins the yardage he needed to convert the 43-yard game-winning field goal. In Week 4, due to poor clock management by the Falcons, Washington got the the ball back with two timeouts and 1:47 left to play.

But the mark of any successful QB is in his ability to take advantage of opportunities. With under two minutes left to play against the Falcons this past week, Heinicke found running back J.D. McKissic. On the play, Heinicke scrambled to his left, evaded defenders before throwing across his body to connect with McKissic on the other side of the field to set up the 30-yard score. Heinicke said after the game that McKissic was his fifth option on the play.

On his improvisation abilities, Heinicke said the following after the win:

“Throughout the years, high school and college, there’s been some bizarre plays so, you know, things like that happen. It’s a lot of fun, it’s really cool, but I feel like I’ve kind of been doing that, those type of plays throughout my life and I think that’s kind of the player I am. Again, I grew up watching Brett Favre, so I saw a lot of crazy stuff from him, so it’s a good part of my game.”

It is intangible skills such as those that the Football Team will rely on in the coming weeks as they prepare for a difficult schedule that includes the New Orleans Saints, Kansas City Chiefs, Green Bay Packers, Denver Broncos and Tampa Bay Buccaneers. According to ESPN’s Mike Clay, the Football Team has the most difficult strength of schedule for the remainder of the season.

In addition to the challenging schedule, Washington also suffered injuries to some major players last week. Pro-Bowl guard Brandon Scherff endured a sprained MCL that will reportedly sideline him for 2-3 weeks. Tight end Logan Thomas also suffered a hamstring injury that is expected to leave him week-to-week.

But the strength of schedule combined with injuries creates the kind of pressure that Heinicke has proven he can thrive under. With Heinicke under center, the Football Team has a chance to win even when the odds are stacked against them.

Conversations From The Under 30 Summit, LeBron Makes A $725 Million Money Move & More: This Week In Young Movers And Makers