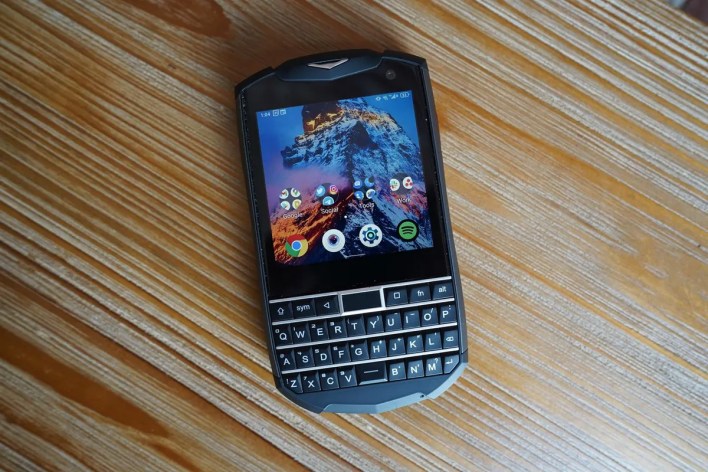 I often roll my eyes at a lot of the brouhaha people conjure about the importance/significance of Apple products, or Apple the company. But when it comes to the original iPhone, there is no denying its impact—it changed the way people thought about smartphones. Before the iPhone, the consensus was that smartphones needed buttons, because touchscreen was too unreliable and lack precision. But then Steve Jobs proved everyone wrong, and within years, button-centric phones (like the BlackBerry) were made extinct.

I know, because I have been testing the Unihertz Titan Pocket for the past month on and off. And needing to use physical force to push into keys to type on its BlackBerry-like keyboard felt really unnatural. I handed the device to some friends and family, and they too had trouble stringing together a sentence without slowing to a crawl.

This was entirely unexpected, because I used to be very skilled at pumping out words on phones with keyboards, and I still pound out words on a physical computer keyboard daily. But the action of typing on a computer keyboard (which uses the other four fingers more than thumbs) is different from thumbing out keys on a smaller, BlackBerry-style keyboard.

Eventually, after four or five days, I finally regained the muscle memory and could type faster—still not faster than on a touchscreen keyboard, mind you, but a benefit of having physical keys is I can take my eyes off the keyboard more often and still hit the keys I want.

But the keyword in the above paragraph is “regained,” because I had a five-year period in my life when I was a borderline expert at thumb typing on BlackBerry-type keyboards. What about for younger people, those who grew up only knowing modern touchscreen smartphones? I’m not sure they’ll ever get used to pecking away at these physical keys again.

But then again, this phone is likely not for anyone under 30—perhaps even 40. The Unihertz Titan Pocket is a throwback in every sense of the word. It’s not just the physical keyboard, but also its petite size: 5.22 x 2.88 x 0.66 inches. Compared to modern smartphones, this is small (although it’s still a bit hefty at 215g).

Such a small form factor has appeal as it can easily fit into the breast pocket of men’s button up shirts or a small purse. But it also means the screen is really small: 3.1 inches. It’s also not exactly high-res, at 716 x 720 resolution.

The square aspect ratio is also a bit odd, as some apps which really prefer a longer aspect ratio, such as Instagram, will be cropped at the sides. The guys at Unihertz designed a workaround: a physical button that, when pressed, forces the screen into a rectangular aspect ratio by pillar-boxing (black bars on left and right side of the display) the on-screen content.

As the look of the phone already suggests, the Unihertz Titan is a so-called “rugged phone,” meaning its build material chases practicality and durability instead of sleek, stylish looks. The top and bottom of the phone are wrapped in black rubber. The sides and back material is aluminum. This is clearly a device that can survive more drops than a typical iPhone.

As for internals, the Titan Pocket has just modest specs: a MediaTek Helio P70 and 6GB of RAM. This a mid-range processor usually seen in entry level phones, but it’s more than enough to power any productivity app from Microsoft or Google. With a screen this small and square, you wouldn’t want to play games or watch Netflix with it anyway—although those apps ran without issues, too.

The keyboard, as mentioned, will feel odd to most people at first touch as they require a bit of force to press, and they’re on the small side. But there’s raised texture to each key so once you get the hang of it, you should be able to type by touch. I love that the keyboard also doubles as a trackpad, though it only works for scrolling actions. So if you’re in a Word document or webpage, swiping up and down on the keyboard will scroll up and down on the app.

The Titan Pocket runs a bare-bones, vanilla version of Android 11. Navigating the UI can be done via the physical navigation buttons at the top of the keypad, or via swipe gesture navigation on the screen.

The physical navigation buttons is a three-button setup that most Android users will be familiar with. The middle “home” button doubles as a fingerprint sensor that works fast and accurately.

The Titan Pocket has the usual volume rocker and power button, in addition to a red button that can be configured to do a variety of things. For example, you can set it so it triggers the flashlight, or email app of choice. You can even set it to make an emergency call immediately. The button supports more complicated gesture like double press or long-press, so you don’t have to worry about accidentally triggering the emergency call with just a single press.

There’s a single 16-megapixel camera on the backside that is perfectly fine if you need to take photos for practical purposes, like snapping a document, or a photo for personal reference. I don’t think the camera quality is good enough for any type of stylish shots that are meant to be posted on social media. Dynamic range is often weak, and details are soft.

The 8-megapixel selfie camera fares much better, mainly because standards for the front-facing camera is much lower. This is fine for casual selfies and video calls. Given the price of the Titan Pocket, and the audience to whom this phone is aimed, I don’t think the cameras will garner many complaints.

Battery life is excellent, thanks to the large 4,000 cell and the low-powered screen. This phone will last at least two full days even with heavy regular use, possibly three days. All the other basic smartphone features are here: GPS, loud speakers, NFC, Bluetooth—although the latter, Bluetooth 4.1, is old technology. I find Bluetooth range to be weaker than any modern smartphone I’ve tested. If you are using wireless earbuds, don’t expect to be able to walk more than 10 feet away without audio breaking up.

Overall, the Unihertz Titan Pocket is a very niche device. It’s not just a phone for those who need to type often, but those who have lived through the days of keyboard phones and yearn for the physical tactile keys. I reckon most young people who have never used those phones will have absolutely no use for the Titan Pocket, and they will almost certainly always type faster on a touchscreen. Still, with a retail price of $299, the Titan Pocket is cheap enough for phone enthusiasts or collectors to pick up as a secondary device.