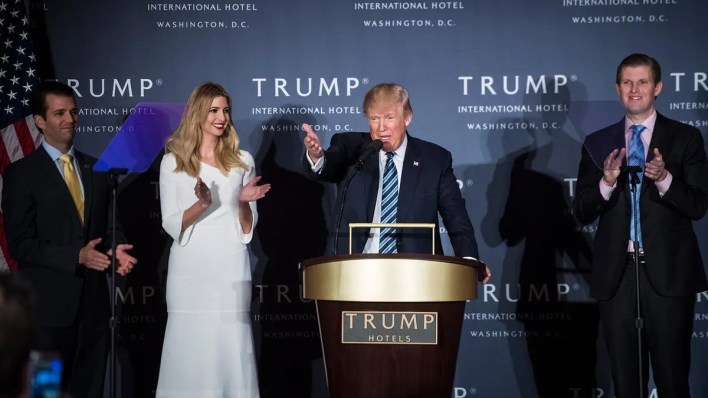 For a 75-year-old billionaire, Donald Trump doesn’t seem to have passed down much of his fortune to his children. Many tycoons give away their empires early, not just because it’s a nice thing to do, but also because it helps to spare their kids from a massive estate tax when they die. A review of documents suggests that in the Trump family, however, the heirs don’t hold ownership stakes in any of their father’s major assets, except one: The Trump International Hotel in Washington, D.C.

The three eldest Trump children—Don Jr., Eric and Ivanka—all seem to have 7.5% interests in a lease on the property. Unfortunately for them, the asset has been performing poorly, losing so much money that one of Donald Trump’s holding companies has had to inject additional cash to prop up the business, according to an analysis of financial statements that the House Committee on Oversight and Reform released last week. Representatives for the Trump family did not respond to a request for comment.

The heirs are partly to blame. Ivanka first identified the property as a potential investment opportunity. With her father’s support, the family decided to get involved, securing a deal in 2013 to lease the building from the federal government by promising that they would spend $200 million on the place.

Spend they did. Deutsche Bank provided $170 million of financing, and by August 31, 2017, the Trump Organization’s financial statements listed $193 million for building improvements, $18 million for furniture and equipment, $5 million for operating supplies and $100,000 for tenant improvements, according to the House documents. Total tally: $216 million.

Don Jr. worked on leasing retail spaces, and Eric helped look after the operation, but things did not go well. Sure, plenty of lobbyists and foreign officials stopped by for drinks, but the financial performance was a mess. In the year ending August 31, 2018, operating profits (measured as earnings before interest, taxes, depreciation and amortization) were just $900,000, according to an analysis of the House documents. Net losses amounted to $13 million. One of Donald Trump’s holding companies had to shift $4 million into the hotel to support the business. Twelve months after that, the small operating profit turned into a loss of $2 million, and the business bled $18 million on a net basis. Donald Trump’s holding company, therefore, had to pump another $9 million into the hotel.

The following year, when Covid struck, things got even worse. Operating losses dropped to $9 million, and net losses hit $22 million. Donald Trump’s holding company had to pony up an additional $11 million to stabilize the business, according to a review of the documents. At this point, the Trump family had invested an estimated $240 million—$170 million of which came from Deutsche Bank and $70 million that seems to have come straight from the family’s pockets.

Bad news, given that plenty of people don’t think the place is worth $240 million. After speaking with seven real estate experts, Forbes estimated last month that the property was worth $173 million. Assuming the Trumps haven’t paid any of the principal back on their loan, that means their equity amounts to just $3 million, $67 million less than the amount of cash the family apparently invested into the place before August 2020. In other words, the only major asset where the Trump kids appear to have serious stakes looks like a rotten deal.

Or perhaps, looked like a rotten deal. On Tuesday, the Wall Street Journal reported that the former president’s family is in “advanced discussions” to sell its right to the hotel for a whopping $370 million or more. Some industry insiders questioned the credibility of that report, given the sky-high price. But if such a sale actually goes through, all of the financial problems that the hotel has caused for the Trumps would suddenly wash away.

The kids’ apparent 7.5% interests—which would be worth just $225,000 after debt at a $173 million valuation—would grow to an estimated $15 million apiece. That’s a lot of money for Eric and Don Jr., who Forbes estimated were each worth $25 million in 2019. It’s also a fair chunk of change for Ivanka, who shares a fortune estimated at $375 million with her husband, Jared Kushner, heir to a separate real estate dynasty.

Donald Trump—the richest of them all, with an estimated $2.5 billion fortune—would receive the largest payday. His estimated 77.5% interest would amount to just $2 million after debt at a $173 million valuation, but it would balloon to $155 million if the place were valued at $370 million. That would surely be enough to convince the former president that the last four years of financial problems, not to mention ethical headaches, were all worth it in the end.

Sabbaticals Are On The Rise To Help Retain Workers. Can They Battle Burnout?