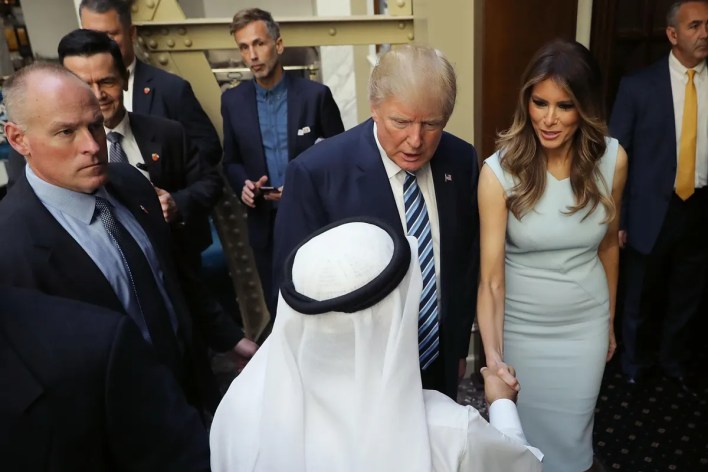 Former President Donald Trump’s Washington, D.C. hotel received an estimated $3.75 million from foreign governments during his four years in office, according to a calculation that House Democrats released Friday. The Committee on Oversight and Reform explained how it reached the estimate, but it did not name the countries who paid the president’s business.

At least, we’re naming the countries whose foreign officials we know spent time there. A full accounting of foreign governments’ patronage of the hotel will probably never be known. But social-media posts, responses to Freedom of Information Act requests and investigative reporting have identified officials from at least 33 foreign governments who visited Trump’s Pennsylvania Avenue hotel.

Its minister of mines and ambassador to the United States attended a dinner at the hotel in 2018, according to an internal State Department email.

Member of Parliament Alban Zeneli (center) gave a speech about reform in his country at the D.C. Gala of the American Society of Diplomacy and Political Science in 2020.

The country’s embassy in the United States co-hosted its 2016 Hanukkah party at the hotel, after Trump’s election but before his inauguration, Politico reported.

The country’s embassy in the United States hosted its 2016 national day celebration at the hotel, after Trump’s election but before his inauguration, Politico reported.

Eduardo Bolsonaro, a member of Congress and son of the Brazilian president, donned a “Make Brasil Great Again” hat in the lobby, as journalist Daniel Rittner spotted.

Spokesman and attaché of the press center of the military ministry, Alexander Urumov, dined at the hotel’s steakhouse in 2018.

In 2020, members of parliament Kerry Diotte and Michael Cooper posed in the hotel’s lobby with Kimberly Guilfoyle, a former Fox News personality and current girlfriend of Donald Trump Jr.

Photis Photiou, the presidential commissioner for humanitarian affairs and overseas Cypriots, addressed a leadership conference in 2018.

Trade Minister Pablo Campana Sáenz paid $1,200 a night during a 2018 stay, according to David Fahrenthold of the Washington Post.

Member of parliament Dalia Youssef posed in the hotel lobby in 2018.

Guglielmo Picchi, Italy’s deputy minister for foreign affairs, had a meeting with Rudy Giuliani in 2019.

Minister of Justice Selim Selimi and Minister of Foreign Affairs Meliza Haradinaj had a friendly encounter at the hotel in 2020 with Richard Grenell, Trump’s former acting director of national intelligence.

Prime Minister Najib Razak bunked at the Trump International Hotel in 2017 when he was in town to visit the White House.

Rob Roos, a member of the European Parliament, toasted with friends in 2019.

Vice President Yemi Osinbajo conducted an interview with the Voice of America from one of the hotel’s signature suites in 2019.

Ali Haider Zaid, federal minister for maritime affairs chatted with the hotel’s managing director, Mickael Damelincourt, in 2019. Zaid was in D.C. to meet at the White House with Trump.

Two senior officials attended a breakfast at the hotel during Trump’s inaugural celebration, according to the Daily Beast.

Prime Minister Viorica Dancila stayed at the hotel in 2019, reported ProPublica and WNYC.

Ambassador to the United States Anatoly Antonov gave a warm welcome to the CEO of a nail salon at the U.S. president’s hotel.

“The Kingdom of Saudi Arabia has paid Trump International Hotel nearly $270,000 through its Washington, D.C. lobbying firm over the past several months, new foreign lobbying disclosure filings show,” the Daily Caller reported in 2017.

National assembly member Wonjin Cho live streamed his dinner from a conference room at the hotel.

A foreign policy advisor for Sweden’s national legislature, Andreas E. Palmlöv, caught up with a great friend at Trump’s property.

At least four ministers in President Recep Tayyip Erdogan’s cabinet headlined a 2019 conference at the hotel on U.S.-Turkey relations.

An aide to President Volodymyr Zelensky, Andriy Yermak, ate breakfast at the hotel in 2019 with the State Department’s envoy to Ukraine, reported The New York Times.

Ambassador to the United States Yousef Al Otaiba chatted in the lobby with Trump confidant Tom Barrack in 2017, reported Politico.