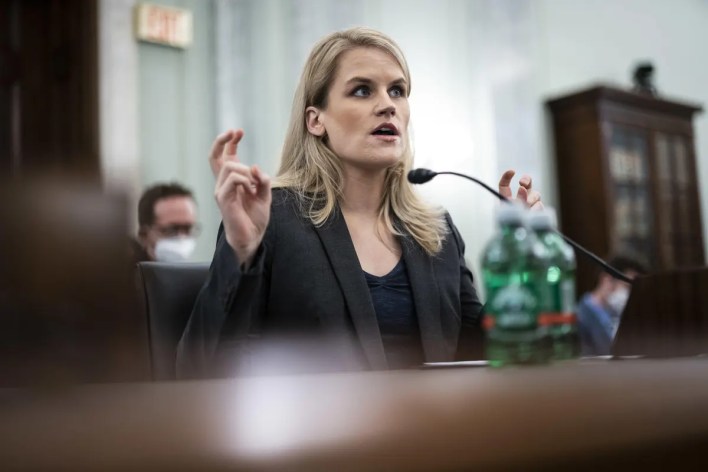 The week came blasting out of the gate with not shocking but devastating revelations about how Facebook prorgrams its algorithm to maximize profits, even when they know it harms their users. It was a big tobacco moment. Former executive Francis Haugen was super credible both in the media and in front of Congress, where she was embraced by politicians on the right and left for different reasons. It’s increasingly clear that giant tech companies are harming the public for profit. Their attempts to cover up data indicating this is true is understandable, and definitive proof they must be regulated. The FB PR machine dutifully trotted out its visionary but tone deaf CEO, Mark Zuckerberg, in a lame attempt to discredit Haugen by portraying her as an angry ex-employee. It didn’t stick.

And then for four hours on Monday, Facebook, WhatsApp, Instagram, and Oculus went down for the better part of a day. Just remind everyone what is at stake when the media coagulates around one company. Facebook was widely roasted while the businesses that depended upon it felt the sting.

Then, today (Thursday) Facebook Reality Labs announced the creation of a ten million dollar maker fund for its still-in-closed-beta Horizon social VR app today. In addition, the company said Horizon will be rebranded as Horizon Worlds. This follows the launch of Horizon Workrooms last month, suggesting there may be more brand extensions to come. Both applications have the same look and feel and use Facebook’s recently updated avatar system.

When Zuck and FRL talk about VR, they are the beloved visionary inventor Dr. Jekyll, but when wielding its enormous power, Facebook sadly resembles Mr. Hyde. The story doesn’t end well. Dr. Jekyll was addicted to the algorithm that turned him into Mr. Hyde. When he realized he couldn’t stop it, the only way out was suicide.

Light Field Lab’s New Naked-Eye Holograms. No glasses are needed to see realistic holograms, objects made out of light, blended perfectly into the physical world. Founded by Lytro veterans, Light Field Lab raised $35 million in 2019. The company is focusing on the $36 Bn dollar market for video walls, but the applications are vast.

A Catastrophe at Twitch. The entirety of Twitch, Amazon’s increasingly popular live streaming service, is now available for download. “Jeff Bezos paid $970 million for this,” the person who posted the file wrote in a forum post. “We’re giving it away FOR FREE.” Details of how the audacious theft went down are so far unknown.

The Void Is Back. Maybe. Assets of the failed free roam VR chain have been acquired by a group that includes its former employees.

Netflix Hit Series ‘Squid Game’ Is Now A VR Game In Red Light Green Light, available free on SideQuest. Anyone seen moving during the red light phase is elimitated from competion. Unlike the TV series, the user lives to play another game.

T his Week in XR is now a podcast hosted by Paramount’s Futurist Ted Schilowitz and Charlie Fink, the author of this weekly column.You can find it on podcasting platforms Spotify, iTunes, and YouTube.

What We’re Reading – The NY Goes To Town on Facebook

How to Reprogram Facebook By One of The People Who Built It (Roddy Lindsay/NYTimes.

Clearly Facebook Is Very Flawed. What Do We Do About It? (Charlie Warzel/NY Times)

Facebook Was Down For a Few hours, Should It Go Away Forever? (Spencer Bokat-Lindell/NY Times)