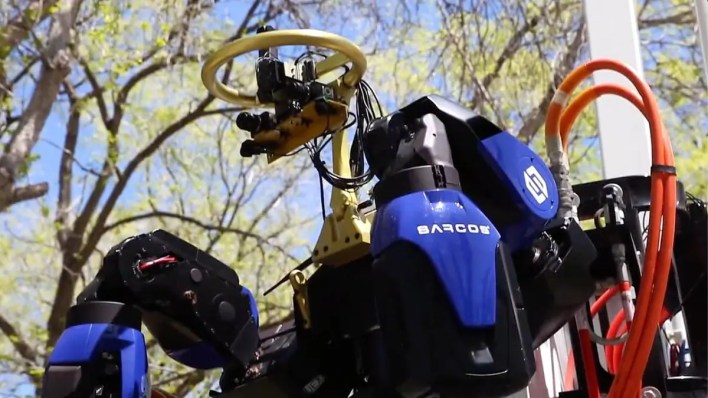 Could robotic avatars do most of the dangerous work in the world?

There are a lot of dangerous jobs in this world. Fixing dams, lopping off tree limbs 50 feet in the air, lifting 200-pound objects: there are plenty of things we ask people to do routinely that expose them to risk of falling, burning, crushing, or simply injuring themselves by trying to do too much for too long.

Sarcos Robotics wants to change that.

“Think of it as a robotic avatar, if you will,” CEO Ben Wolff told me recently on the TechFirst podcast. TechFirst podcast. “The robot goes and does the work for you in the dangerous or difficult environment, at height or in a confined space, and the robot follows you and performs the motion and movement that you ask it to directly and immediately.”

Guardian XT is the latest “highly dextrous mobile industrial robot” from Sarcos. Think of it as the top half of your body with super-strong arms, configurable attachments for different tasks, a built-in battery pack, cameras and sensors for eyes, and a 5G connection for taking orders from a remote operator who sees what the robot sees via a VR headset and wears a motion capture suit so the robot does what he or she does.

It’s not quite Avatar, the movie, but it’s perhaps the closest thing we’ve got so far.

Sarcos also makes the Guardian XO, which is essentially an exoskeleton you wear that gives you superpowers like lifting 200 pound essentially effortlessly. That probably works well in a warehouse or manufacturing setting.

But sometimes you don’t want to put a human at risk at all.

“What we realized as we were developing over the last 20 years the Guardian XO, which is a wearable full body robot … is that there are some applications where our customers were wanting to do things like put our exoskeleton in a bucket truck, so that heavy and dexterous work could be done at height,” says Wolff. “And we started thinking to ourselves, well, why do we bother with the legs on that robot? You don’t need the legs, in fact, you don’t even need the human to be in the bucket anymore to be able to lift 200 pounds. Let’s take the torso and the upper body and the arms of the exoskeleton, put it into the bucket truck and then keep the human down on the ground to be able to manipulate and direct what the robot does up at height.”

With different attachments on its arms, Guardian XT can weld, sand, grind, cut, inspect, and more. Over time the company will be developing more quick-swap attachments for more capabilities, just like an excavating company might purchase different buckets or attachments for its machinery as different jobs have varying requirements. Plus, there’s a three-fingered robotic hand coming that can hold and use many of the tools a human uses today.

Sarcos has deployed the Guardian in testing situations with customers and says the initial feedback is positive. The second generation will be completed later this year, and the company will redo the same testing cycle to ensure it has a product that meets needs.

Commercially available units are scheduled for shipping near the end of 2022.

The 5G aspect, which Sarcos developed in partnership with T-Mobile, is interesting as well.

5G brings speed and immediacy to vision and control: workers see in real-time what the Guardian XT sees, and reactions are also sent in, basically, real-time. That’s important in real world scenarios with high-risk activities.

It also opens up possibilities for more remote work in the future … where the operator doesn’t need to be physically present at every mile, for example, of a far-North oil pipeline, to be able to do work there in the middle of winter.

“All of these industries are having labor challenges,” Wolff says. “So if now we can attract young people to say, ‘You know what? You can still do this really cool work, really meaningful work, but instead of having to be at height in a bucket truck, now you get to stay on the ground where it’s safe; you can stay dry, and you can manipulate the robot because it’s the one doing the hard work up in the air.’”

The company should have plenty of resources to complete development.

In April Sarcos announced plans to go public via SPAC through a merger transaction with Rotor Acquisition Corp. The transaction should complete soon, and should provide the company with up to $496 million in cash.

If Wolff and team get it right, there will be plenty of opportunity for sales.

“I think that first and foremost, as we launch this product at the end of next year, we’re going to see real applicability in the construction industry … doing things at height, whether it’s welding and sanding and grinding and cutting and all of those kinds of things that you see construction workers doing either in bucket trucks or on scissor lifts,” he says. “Anything that’s an elevated platform, we can now do that with keeping humans safely down on the ground. I also think we’ll see it in the power industry. So doing things like limbing trees over power lines, maybe even getting to the point that we’re managing some of the fine motor skill work that needs to be done on the top of the power pole. When you talk about doing things like transformer installation, removal, replacement, insulators, those kinds of things — those are all things that are highly dangerous jobs.”

Subscribe to the TechFirst podcast, or get a full transcript of our conversation.