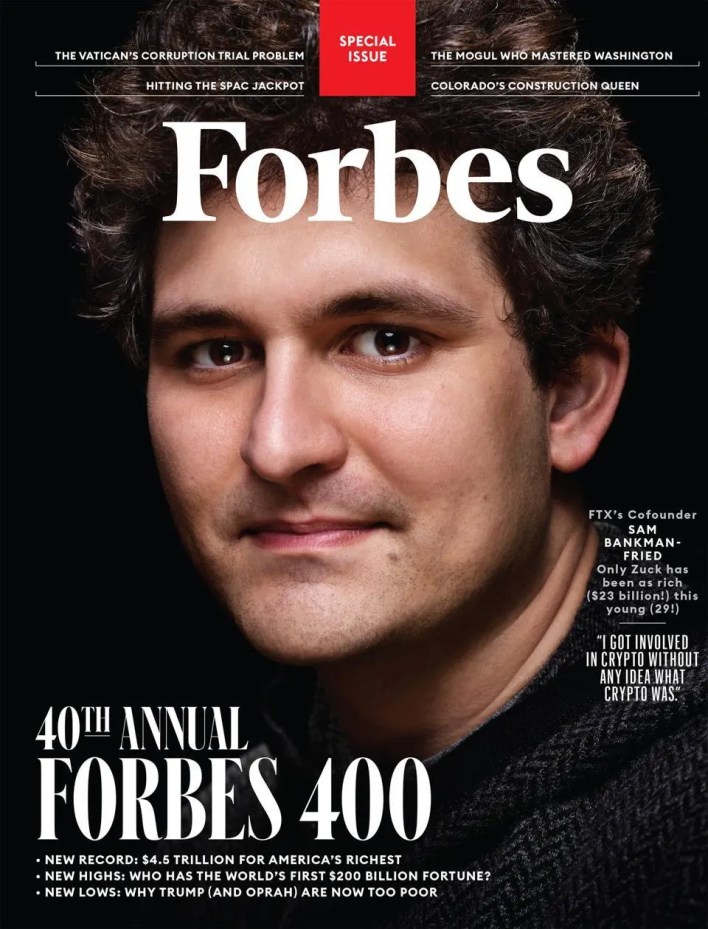 Forbes estimates that Bankman-Fried is now worth $26.5 billion, up from $22.5 billion just a month ago, when the crypto wunderkind graced the cover of this year’s Forbes 400 issue as the second-richest under-30 in history.

As of 11:30 am Thursday morning, he is the 25th richest person in America and the 64th richest person in the world, according to Forbes. Only Mark Zuckerberg, who hit $28.5 billion at age 29, has been richer at this young age. With Thursday’s deal, Bankman-Fried has inched even closer to Zuck—four months shy of his 30th birthday

It’s been a quick ride to the top for Bankman-Fried, who launched FTX just two and a half years ago and has already grown it into one of the world’s leading crypto exchanges. The son of two Stanford law professors, he toyed with the idea of becoming a physics professor while studying the subject at MIT, but ultimately decided to seek a more lucrative career because he thought it would enable him to donate more money to charity. His firm belief in “effective altruism,” the utilitarian-inflected notion of doing the most good possible, led him to take a job trading ETFs for quant firm Jane Street and donate a chunk of his six-figure salary. Then it led him to quit that gig and plunge into the crypto world, where he spied an opportunity to make a fortune arbitraging bitcoin by buying it in the U.S. and selling it in Japan for up to 30% more.

“I got involved in crypto without any idea what crypto was,” Bankman-Fried told Forbes last month. “It just seemed like there was a lot of good trading to do.”

Know someone who has what it takes to make the next Forbes Blockchain 50? Nominate them here.

He founded Alameda Research, a trading firm, and then—frustrated by the quality of the major crypto exchanges, which weren’t equipped to handle professional traders moving large sums at rapid speeds—launched his own exchange in 2019. In just two years of catering to the more-sophisticated trader, FTX has gotten huge: it now handles $14 billion worth of trades every day, according to a press release, placing it among the largest crypto exchanges in the world. Much of its volume comes from derivatives trading—things like bitcoin options or Ethereum futures. Last year FTX generated some $350 million in profit on about $750 million in revenue by pocketing an average of 0.02% of each trade made on its platform. FTX says its user base has grown by 48% and its average trade volume has jumped by 75% since July of this year alone.

That’s when investors like SoftBank and Coinbase Ventures pumped $1 billion into the business at an $18 billion valuation. He’s been using that haul to make strategic buys like a New York-based exchange that could allow FTX to be the first major crypto exchange to offer derivative products in America, ahead of competitors like Binance, Coinbase and Kraken. And he’s been stamping the FTX brand everywhere possible, including a $210 million deal to rename leading esports league TSM and a $135 million deal to rename the Miami Heat’s arena, plus a $30 million ad campaign to promote FTX through ambassadors such as Shark Tank star Kevin O’Leary, NFL legend Tom Brady and NBA superstar Steph Curry, each of whom have equity in FTX.

The immediate goal: to establish his young crypto exchange as something safe, dependable and regulatory compliant. The longer-term plan: to give all the money he makes to charity. “My goal is to have impact,” Bankman-Fried told Forbes. So far, he’s only donated about $25 million, to causes like voter registration, global poverty mitigation and artificial intelligence safety—the rough mathematical equivalent of a typical 29-year-old American stuffing $15 into a Salvation Army bucket. Nearly all of his estimated $26.5 billion fortune is tied up in his ownership of about half of FTX, a share of its FTT tokens and a few billion dollars’ worth of other cryptocurrencies he’s backing. He’s betting he can give away billions more in the long-run by doubling down on crypto instead of cashing out now.

So far it’s working, thanks to his ability to raise hundreds of millions seemingly at will. Thursday’s $421 million came just three months after FTX’s billion-dollar haul this summer. Future funding rounds could drive up the value of his FTX stake further, adding billions more for him to eventually donate. And with four months to go before he turns 30, he may even break Zuck’s net worth record along the way.

With Divestitures On The Rise, Dealmakers Adjust To A New Reality