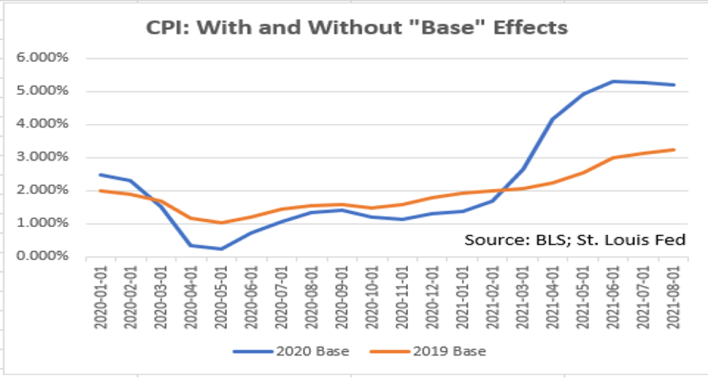 The initial fiscal response to the pandemic in the U.S. was several rounds of “helicopter” (free) money, a very generous and lengthy addition to the level of unemployment benefits, and a set of new unemployment programs (called Pandemic Unemployment Assistance (PUA) programs) for those not covered by the pre-pandemic state unemployment system. One result was an additional $300/week for 75% of those covered by state programs (some states, representing 25% of those in the state programs opted not to pay the federal $300/week supplement).

But, the larger portion of the fiscal stimulus was the PUA. For much of 2021, between nine and twelve million received such benefits. Both the PUA and the $300/week unemployment supplement ended in early September. Suddenly, this throng stopped receiving a weekly check.

During Q2/21 and part of Q3, the large federal checks sent to households caused a resurgence in consumer spending. Auto sales, for instance, had a record month in April. Retail, too, recovered to its pre-pandemic levels, although the sector weights differed (more goods, less services). But, now, with the worry about the Delta-variant, the cessation of most unemployment benefits, and the end of the eviction and mortgage payment moratoriums, the Q4 outlook for consumption, the major driver of GDP, has dimmed.

Major economic forecasters lowered their Q3 real GDP growth forecasts in late September to the 3% area from the7% level they had forecast as late as August, and now that the weekly checks have dried up and landlords and financial institutions can pursue back rent/mortgage payments, we believe Q4 consumption spending will plummet. In fact, it is not beyond the pale of probability that Q4 could show negative real GDP growth. Furthermore, this is not just a U.S. phenomenon. The world’s second largest economy, China, has already shown significant growth recession and outright contraction in some heavy industries. And the huge leverage in their real estate market is now unwinding as seen with the Evergrande fiasco. Evergrande is a Chinese real estate development company with $300 billion of debt, and it looks like the major losers will be the offshore, dollar denominate bond holders. Since real estate represents 30% of China’s GDP, business contraction appears inevitable.

As of the September meeting set, the Fed appears to have become more hawkish. We can’t see why, as the economy looks to be much weaker. Perhaps they are just going along with the media’s fixation on “stagflation.” Specifically, Fed Chair Powell said the Fed is now thinking about “tapering” its asset purchases, which in lay terms means reducing its monthly money printing of $120 billion via the open market purchases of Treasuries and Mortgage-Backed Securities. We think this is long overdue since the banking system is swimming in liquidity as seen in the record levels of overnight reverse repurchase agreements (banks selling their excess reserves back to the Fed for a meager .05% (.0005; equivalent to $1.37/day per million).

During each Fed meeting, the 18 Federal Open Market Committee (FOMC) members indicate their view of where the Fed Funds rate (overnight borrowing rate the Fed charges banks who need reserves – none of them do, but theoretically, if they did, they would pay this rate) will be over the next few quarters. This is known as the “dot-plot.” At the September Fed meeting, 9 of the 18 now believe that there will be at least one Fed Funds rate hike (of .25%) in 2022, and a few believe there will be two such hikes. At the August meeting, only 7 of the dots indicated a 2022 rate hike. This is one reason that longer-term interest rates have spiked higher in recent days.

The second reason for the rate spike was the impending restrictions on Treasury debt and spending, and possible “technical” default on some T-bills if Congress didn’t raise the debt ceiling in a timely fashion. (On Friday, Congress did vote to move this issue back to late December, and bond yields gave a small amount of the rate spike back.)

Rosenberg Research examined the forecasting record of the “dot-plots” since their 2012 inception and found them to have almost no correlation with what actually happened; in other words, the “dot-plots” have been horrible at forecasting how the Fed Funds rate actually moves. Fed Chair Powell indicated that the employment picture was approaching the very murky “substantial further progress” standard the Fed will require prior to raising rates. The official statement says that “if” employment progress continues (which we think is a given since the overgenerous unemployment benefits have now ended), the Fed “may” begin to “taper” its asset purchases. We certainly hope so. But there is really nothing here (except the dot-plots themselves – which Powell said a an earlier press conference to ignore as far as official policy is concerned) that says that interest rates will rise. And, if the economy continues to weaken, as we think is already in progress, the Fed has no obligation to raise rates or even to taper the asset purchases.

Much of the media’s inflation hysteria is due to base effects, i.e., the fact that prices nose-dived during the initial months of the pandemic due to lockdowns. A return to pre-pandemic prices makes it look like there has been inflation because the denominator is artificially depressed. The chart at the top of this blog shows Y/Y changes in the CPI expressed as annual rates. The blue line is the reported Y/Y increase in prices using 2020 as the base. The tan line is the same except the base is 2019 instead of 2020, and the price change is “annualized.”

Using 2019 as the base, it is clear that there has been an acceleration in the CPI to the 3% area. While this is somewhat elevated by recent standards, it is nowhere in nosebleed territory as the media would have the populous believe.

Furthermore, much of the inflation is commodity based (lumber is the poster child). Prior to the Evergrande collapse, China’s economy was already slowing. August retail sales showed up at +2.5% Y/Y. That number was +8.5% Y/Y in July, and the consensus estimate for August was +7.0% (a huge miss). On a M/M comparative basis, August was -5.0% on top o f July’s -3.2%. The three-month trend is a whopping -27% (annual rate). Construction there is down -3.2% YTD, and steel output is at a 17-month low. Since China is the largest consumer of commodities, the significant slowdown there implies the end of the commodity upcycle. We expect downward price pressures to emerge.

As far as wage inflation is concerned, the Atlanta Fed’s wage tracker, the gold standard for monitoring wage issues, is in a very mild uptrend. But all the wage growth is in 10% of the jobs pie (16-24 year-olds, unskilled, high school education, in the leisure/hospitality sector).  The other 90% of the job holders are not seeing wage growth acceleration.

Another critical/negative impact on the economy’s Q4 growth is the end of the eviction and mortgage payment moratoriums. The 11 million renters who are behind on their rent must now use their cash to pay that rent; most of them must also begin to pay back rent. As a result, that rent and back-rent will no longer be available to consume.

Nearly every Fed September survey says the economy has slowed and continues to slow dramatically.

China’s Manufacturing PMI fell into contraction (49.6 September vs. 50.1 August; 50 is the demarcation between expansion and contraction) for the first time since the lockdowns of early 2020. China’s real estate sector makes up 30% of its GDP, and with the Evergrande default, an implosion in that sector has started. That means China won’t be needing the raw commodities it has been so voraciously consuming, and commodity prices should retreat. That will help quell the “stagflation” narrative.

Initial Unemployment Claims (ICs) in the state programs stopped improving in mid-August and rose substantially in mid-September as seen on the righthand side of the chart. ICs are a proxy for new “layoffs,” and is another indicator of economic softness.

The next chart showing total Continuing Unemployment Claims (CCs) looks like a winner, as CCs fell from 12.1 million to 5.0 million (i.e., -7.1 million).

Unfortunately, this didn’t happen because employment improved. It happened because the PUA Programs ended in early September. PUA CCs, alone, fell by -8.6 million between the weeks of August 28 and September 25. The latest data for state CCs is for the week of September 11. We expect to see a continuation of the fall in this number as the remaining weeks of September are reported.

Is this good news? While consumption will fall because these programs ended, data analysis clearly shows that the PUA programs disincentivized lower wage and lower skilled workers from working. Why work when the government pays as much or almost as much as a 40-hour work week? This has caused worker shortages in many service-related industries, causing employers to raise starting wages to attract workers. But that appears to be where it ends. As noted above, the Atlanta Fed Wage Tracker shows rising wages only in that skill/age subset which represents about 10% of the working population. Now that the federal programs have ended, we believe that the available jobs will start to fill, as most need some sort of paycheck in order to live. Thus, our expectation is that the official employment data for the immediate months ahead will be rather robust, but not fast enough to halt the economic slowdown that is currently in progress.

Housing, a substantial contributor to U.S. GDP, appears to have peaked some months ago. That shouldn’t be a wonder as home prices have risen 20% Y/Y. That’s where the real inflation resides:

The equity markets seem to have gotten a whiff of what appears to be a worldwide economic softening trend. China appears to be shooting itself in the foot with government actions against its large private companies. The Evergrande fiasco there makes near-term economic contraction appear to be inevitable.

In the U.S., the S&P 500 lost nearly 5% in September. Those equity markets remain volatile as we begin Q4, and now appear to have a downward bias.

Interest rates spiked in September’s second half on the belief that the Fed had turned hawkish and would raise rates sooner rather than later. In addition, markets worried that the Congress wouldn’t increase the debt ceiling and that possibly could lead to a technical default on some maturing Treasury paper. Late last week (week ended October 2), Congress pushed the debt ceiling issue out to late December. It is our view that the emerging softness in the world’s two largest economies will cause the Fed to delay rate hikes, and that a substantial reversal of the September rate spike will occur as Q4 unfolds.

(Joshua Barone contributed to this blog)