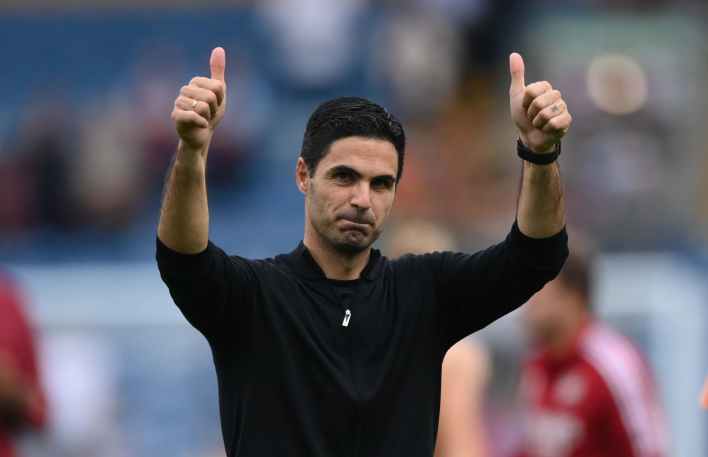 When Mikel Arteta returned to Arsenal in December 2019, he was shocked by what he found.

It had only been three years since he had called time on his playing career and left north London to take up a role within Pep Guardiola’s coaching staff at Manchester City, but much had changed in that short space of time.

The club he had left behind in 2016 felt different.

The stadium, the training ground, even some of the players remained the same. But much of the soul had been sucked out of the place.

When asked during his official press unveiling whether he thought the club had lost its way, he replied, “That’s what I’m sensing from the outside. I would like to take some steps to start to understand the reasons why.

MORE: Arteta had talks with Wenger about possible return

“We have to create the right vibe, the right energy, and everybody at the organization has to feel so privileged to be here. There’s no other way.”

It’s now been almost two years since Arteta made those comments and he has spent much of that time trying to bring a sense of identity back to the inner sanctum of the club.

During his time as a player in north London, which stretched from 2011 to 2016, Arteta was well aware of what it meant to be at Arsenal.

Arsene Wenger had spent two decades building an identity for which the club had become known throughout the world.

But that identity became fractured during the final stages of the Frenchman’s reign.

There was in-fighting behind the scenes over how Wenger’s departure should be handled, while large sections of the fans were becoming more and more frustrated with the direction in which the club was heading.

Unity was a thing of the past and the cracks that were starting to appear widened during Unai Emery’s short tenure.

The Spaniard was an extremely hard worker, but that came at a cost.

He would shut himself away in his office, which was situated near the entrance of the main building at London Colney, and players and staff would often go hours without seeing or hearing from him.

And he would often find no time to take any sort of interest in the youth teams or attend any of the games which were staged at the training ground.

A disconnect appeared. There was no togetherness, no sense of everyone pulling in the same direction in an attempt to turn things around.

“I found an environment, a culture that I wasn’t feeling identified with,” Arteta said. “It’s about having a feeling of being privileged to represent this club every time you come through that door.

“If that is lost, you have to go, get back in your car and drive home because we are not going to move this club the way we want without a purpose.”

The Gunners boss added: “If I have to define our identity, that is one word: Unity. Without unity, you can’t achieve what we want to achieve.

“Unity means every person that works in the organization. It’s our way of playing, our way of transmitting our values, our way of connecting with our fans, our ownership.

“That’s what we want to get, and I am going to push the boat very, very fast.”

One of Arteta’s biggest strengths is his ability to get players to buy into his way of thinking. But he is also ruthless, as many have found out.

His first two years at Arsenal have been spent trying to completely overhaul a fractured squad which was bloated and contained players on big money that he did not believe suited the direction he wanted to take the club.

It took some time, but slowly they have all been moved out and now, for the first time since he returned as manager, he has a squad that feels like his own.

The summer transfer window felt a big moment in the rebuild, with the six additions adding a fresh and vibrant feel to the changing room.

And the changes are now beginning to bear fruit, with Arsenal traveling to Manchester United on Thursday night sitting fifth in the Premier League and outside the top four on goal difference only.

But it’s not just on the pitch that things are improving. Arteta’s work behind the scenes has been just as productive.

He has pushed through big changes at the training ground, which has been given a facelift to celebrate former glories and remind the current players of the standards they need to try and follow.

Arteta felt the corridors around London Colney were too sterile, so pictures, murals and inspiring quotes have been put up on the walls, with more to follow soon.

One huge mural that the squad must walk past before heading out to train every day celebrates the record setting 49-game unbeaten run, while a giant picture of Arsene Wenger now greets the players when they enter the building each morning.

A quote from Wenger sits on the wall underneath it, which reads: “Here you have the opportunity to get out the greatness that is in each of you.”

When asked why having Wenger’s presence at the training ground was so important to him, Arteta told Goals: “For me, it’s something that we lost and we have to recover.

“I wanted that picture and a phrase that is very inspirational at the entrance because it was a big part of what he did at Colney and how everything started at the Emirates.

“You just look at his eyes and it’s as if he’s there. He has this capacity, he penetrates when he looks at you. The players really benefit from it. He had to be there.”

Arteta is now pushing for Wenger to return to the club in person, albeit not in a role of any official capacity.

What the Spaniard would like is for his former boss to feel welcome enough to visit London Colney whenever he wants and to be able to pass on his experience, both to the coaching staff and the players on an informal basis.

“I think he would have a great time just seeing the environment he can create around him when he is around this place,” Arteta explained. “Things take time and I think he has to dictate those timings.

“What I can say from my side, and I think on behalf of everybody, is that we would be delighted to have him much closer.”

As part of the London Colney facelift, Arteta has moved out of the office that both Wenger and Emery had by the main entrance and moved into one that sits next to the offices held by other members of the coaching and management staff.

He works extremely closely with technical director Edu and academy manager Per Mertesacker, with group meetings now held in an open space within the new coaching area to try ensure there is a sense of openness and togetherness throughout the building.

Arteta is now regularly spotted wandering over to watch youth games and training sessions and, along with Mertesacker, he is keen to bring legends back to work with the club’s youngsters.

David Seaman has returned in recent months to help out with the academy goalkeepers on an informal basis, while Jack Wilshere was given the opportunity to work toward his coaching badges while he gets himself fit ahead of the January transfer window.

There is still lots to be done at Arsenal and the “process” that Arteta has spoken about since he returned is far from complete.

But there is certainly a sense that the club is now in the best shape behind the scenes that it has been for a long time thanks to the work that has gone on during the last two years.

Arteta said he found an environment he couldn’t identify with when he arrived in 2019. Now, two years on, the environment at Arsenal is starting to feel a bit more familiar.

Du Preez to join Glasgow for next season

“Without Kevin Durant on the Warriors, this team will go as far as Steph shoots this team” - Skip Bayless believes Stephen Curry is the defining line for Golden State Warriors' success this season