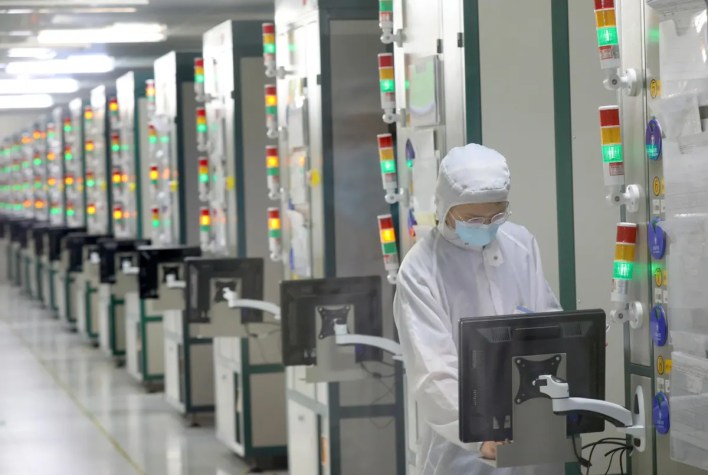 China’s vulnerability in the semiconductor industry is acute, rooted in its technological inadequacies in key parts of the value chain. This applies not just to the core production stages – where Beijing may plausibly imagine that it can spend its way into competitiveness with massive government investment (although this has not been successful to date). But the weakness of the Chinese position extends to certain highly specialized supporting technologies, which would be much harder for China to enter. The Western control of semiconductor technology is stronger many realize.

The Basic Industry Segments, And Beyond

There are four basic industry segments in the production of integrated circuits: Design, Fabrication, Packaging, and Semiconductor Manufacturing Equipment. As described in the previous column, China is weak in all of them. Chinese firms have no strategically significant position in the high-value Design, Fabrication, and Equipment segments. They have only a modest market share only in the least important, most commoditized segment (Packaging), which is not enough to create meaningful economic leverage.

This picture is incomplete, however. An expanded view shows China to be at an even greater strategic disadvantage.

The core IC manufacturing chain is embedded in a vast eco-system – probably the most complex supply network in the entire global economy. It encompasses thousands of other firms that provide critical inputs to the core: raw materials (silicon, specialized chemicals and gases), high-value services and software, specialized tools and test instruments, and even technologies to deliver specialized commodities like ultra-pure water and ultra-reliable electricity. And of course, as in any high-tech industry, there are essential intellectual property assets (IP) that must be acquired or licensed.

Within this network, however, some components are especially important. Two ancillary segments are critical.

The companies in these segments provide key inputs to the Design segment. They enable the fabless IC companies and the IDMs to construct the chip-designs that create value for the end-users throughout the digital economy — value which ultimately pays for the entire IC network.

These supporting players are themselves very powerful generators of economic value, which illuminates their crucial role in the industry. In fact, the leading firms in these two segments are even more potent value-creators than the leaders in the four segments described previously.

Of the four main segments in the basic IC value chain, it is the Design stage where most of the functional differentiation of an integrated circuit is substantially created. The value to the end-user comes mainly from the chip-design. The role of the Fabrication (foundry) and Packaging segments is to productize those designs, which, while important, generates and captures a much smaller percentage of the economic value. This is why Fabless IC companies like Nvidia or Qualcomm are able to claim the lion’s share of the total industry value created (described in more detail the previous column).

But to achieve this, the Design firms rely on the two additional segments highlighted for very specialized help: EDA and Core IP.

Once upon a time…

This doesn’t happen anymore. A modern integrated circuit may comprise billions of elements – far too complex design “by hand.” Design automation means – well, just what it sounds like: it is a suite of software tools to automate the design process, to manage the scale and complexity.

The firms that provide EDA technologies – like Cadence, Synopsys, and Ansys – are less well known than the mainline semiconductor firms in the basic segments. But while EDA suppliers may stay “in the background,” their products are critical to the success of the IC development process.

EDA firms are very powerful value-creators, with P/E and P/S ratios higher than any of the main semiconductor industry segments.

The financial markets award EDA firms a 35% premium in share value compared to the Fabless IC companies, per dollar of earnings, and about a 25% premium per dollar of sales. The premium is obviously much larger relative to the other segments.

Several readers have pointed to what they saw as a “serious omission” in my earlier column – raising the question: What about Arm?

The Core IP story can be distilled from the Arm story.

This unusual company – Arm Inc., or Arm Limited, or Arm Holdings – embodies a distinctly 21st century business model, asset-lite, IP-heavy, even more fabless than the fabless IC firms. Based in the UK, owned by a Japanese venture capitalist (Softbank), soon to be acquired (maybe) by one of its own customers (Nvidia) – some would say that Arm is the linchpin around which the entire semiconductor galaxy revolves – or at least that part of it that deals with “edge” applications (i.e., most digital consumer products).

Arm does not belong to any of the four core segments shown above. It is a design company, but it doesn’t design chips. Instead it develops and sells (licenses) blocks of intellectual property (IP), “computing architectures” which IC designers (like Qualcomm, Nvidia, Intel) can build upon to create their own IC products.

Arm has become spectacularly successful at what it does. Founded in 1990, with a $3 million investment by Apple, the company is today the dominant power in Core IP for semiconductors in a wide range of applications. Arm virtually monopolizes the architectures for processors used in several mass market products – mobile phones, smart watches, tablet computers, and smart TVs. Over the past two decades, the company has rolled up dozens of smaller design groups into a portfolio that seems today almost unbeatable.

That’s 25 Arm-based chips for every person on the planet. 70% of the world’s population are using ARM-based products.

ARM is not just for the mass (edge) markets. Its technology is also the basis of world’s fastest supercomputer. Arm is targeting the server market as well.

As the company looks towards “a trillion cores,” its management sees other new markets to swallow up, including the “internet of things” (IOT) – a classic, and massive edge market where their strengths should be obvious. Indeed, on its website Arm now styles itself “the foundation for a new IOT economy” – that is, for all sorts of…

Arm’s licensing program covers almost the entire design side of the semiconductor industry.

This is not the place to go into the specifics of Arm’s technology. Arm’s essential functional advantage, for the applications it dominates, is the ability to deliver high-performance at low-power:

In short, if you want to build a data-center server, where power is not the main constraint, Intel’s X86 architecture is apparently the best option, and Intel still has a 90%+ share., But if the goal is to design a smartphone or a smartwatch or an unwired sensor or other edge product where power consumption is the critical limiting factor, Arm is the clear choice – and it has a 90%+ market share.

Value Creation: What is ARM Worth?

Last year, Nvidia made an offer to acquire Arm from Softbank for $40 billion in stock and cash, which sets us a concrete value-point. (In fact, since the offer was made, Nvidia’s share price has risen, raising the value of the share component of the offer – so the deal today would be worth about $54 billion.)

Arm realized about $2.1 billion in revenue over the last 4 quarters, and earned $125 million.

The P/E ratio of something in the 300-400 range may not be meaningful right now. The Price/Sales ratio is more solid. It is much higher than the averages for any of the other segments, and comparable to the priciest of the Fabless IC companies (Nvidia itself).

In summary, these two ancillary segments – EDA and Core IP – are powerful value-generating engines. The market gives these firms a high premium for their sales, earning, and cash flows. In functional terms, they enable the companies doing the chip design to do what they do. In short, Core IP and EDA are technologies that supply the recipe and the ingredients for the chip-makers’ secret sauce.

The Bad News For Beijing

As developed in the previous column, the relative strength of the Chinese and Western positions in the semiconductor techno-geopolitical rivalry is clear:

Now we can add:

To quote from a January 2021 report by the Center for Security and Emerging Technology (CSET):

The concept of national self-sufficiency is irrelevant in semiconductors. China’s aspirations in that regard are illusory.

National leverage, on the other hand, can be quite real in certain situations. The squeeze applied by the U.S. to Huawei through the denial of access to American semiconductor technology has been effective, more than many expected perhaps. No doubt it has been humiliating for Beijing to watch as their premier national tech champion has been taken down several notches.

Right now, notwithstanding the alarmism in some quarters in the press, the U.S. and its allies hold most of the important cards. The EDA and Core IP segments are two of the winners.

Crypto Advertisements Are Everywhere: The Consumer Isn’t A Moron

Crypto Advertisements Are Everywhere: The Consumer Isn’t A Moron