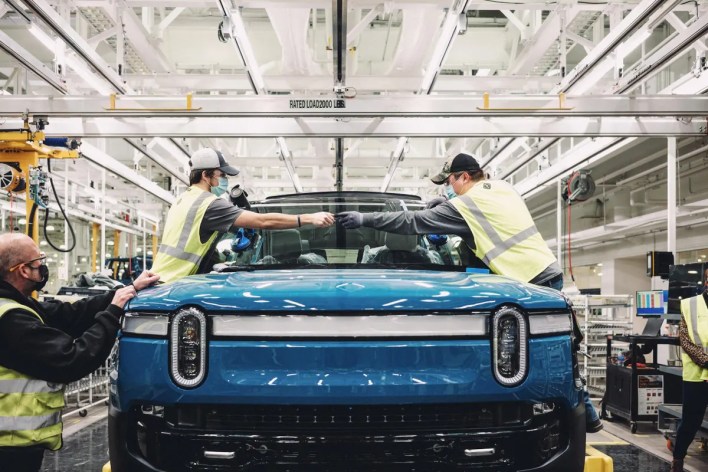 Rivian Automotive, the best-funded electric vehicle startup in U.S. history, filed for an initial public offering and revealed that it has nearly 150,000 initial orders for its battery-powered pickups, SUVs and delivery trucks and that Amazon and Ford own stakes of 5% or more.

The potential Tesla challenger, based in Irvine, California, filed an S-1 statement with the Securities and Exchange Commission late Friday—a follow-up to its announcement of a confidential IPO filing in late August. The company disclosed preorders for 48,390 R1T pickups and R1S SUVs from customers in the U.S. and Canada, each requiring a $1,000 deposit. Additionally, it has orders for 100,000 delivery vans from investor Amazon to be delivered through 2025.

The company just began production at its Normal, Illinois, plant last month and follows rival startups Lucid and Fisker Inc. that are each targeting a big share of a growing market for electric vehicles. Founded by Massachusetts Institute of Technology PhD RJ Scaringe, Rivian arrives with both an audacious level of funding—more than $10 billion—and significant support from the auto industry including Ford and investor Cox Automotive.

“We can spend a lot of time debating the specifics of climate change, but the indisputable truth is that we, as humans, are rapidly changing the composition of our atmosphere. This is what inspired me to start Rivian, and it’s what drives every decision we make as an organization,” CEO Scaringe said in a letter to investors in the filing. “The challenge is as big as it comes but we’re fortunate to get to help solve it with such passionate team members and partners.”

Along with generating revenue from vehicle sales Rivian said it will also make money from selling regulatory pollution credits to other automakers. That’s proved a particularly impactful business for Tesla, keeping it in the black in numerous quarters. Between 2008 and the first half of 2021, the electric-car maker led by Elon Musk has reported cumulative credit sales totaling $4.8 billion.

Rivian’s Illinois plant, a former Mitsubishi Motors factory, currently has capacity to produce no more than 150,000 units annually, according to the filing. “We expect vehicle demand to outpace our production volumes in the near-term as we work to fulfill customer preorders and continue to add to our backlog of preorders.”

20 Gifts for Men That He Won't Want to Return