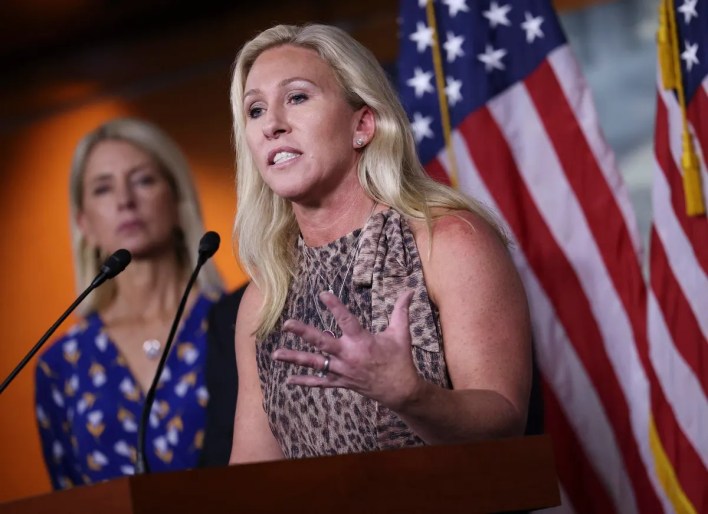 Usually when you compare two things, they have to be somehow related. Otherwise, you may raise some eyebrows by saying something like, “these chips are making me thirsty, yet I got some botox injected into my face.” That’s why Representative Marjorie Taylor-Greene’s (R-Georgia) attempt to compare Kyrie Irving’s refusal to get the Covid-19 vaccine with Magic Johnson’s HIV diagnosis back in the 1990’s got a collective “what the bleep” from the Twittersphere.

Irving, a star point guard for the Brooklyn Nets, has remained unvaccinated despite the New York City (NYC) government requiring proof of vaccination to participate in group indoor activities such as sporting events in NYC. This requirement was put in place to prevent the spread of the severe acute respiratory syndrome coronavirus 2 (SARS-CoV-2) because those unvaccinated may be more likely to catch and spread the virus. Since Brooklyn is in NYC until further notice, the Nets organization must keep Irving from playing in Nets home games in order to comply with the NYC regulation.

This apparently prompted Lavern Spicer, a Republican who in 2020 unsuccessfully ran for a Florida seat in the U.S. House of Representative, to tweet the following last Tuesday:

Whoa, what does Johnson, the Hall of Fame point guard who played for the Los Angeles Lakers in the 1980s and 1990s, have to do with the Irving situation? Why did Spicer bringing the human immunodeficiency virus (HIV) into a conversation about the Covid-19 coronavirus? And what the heck is full-blown HIV as @bRHOwn_eyedgirl asked below:

HIV is not a pile leaves. It doesn’t make sense to refer to the virus as “full-blown” or even “partially-blown.” But that’s not the only way Spicer appeared to blow it with her tweet. They, meaning the NBA, allowed Johnson to return to basketball after his 1991 HIV diagnosis because unlike SARS-CoV-2, HIV does not spread via respiratory droplets or casual contact. Former NBA player Rex Chapman wondered whether Spicer knew this fact:

Interestingly enough, Spicer seemed to acknowledge this fact in the following thread where someone seemed to school herself:

And no, basketballs are not the type of balls usually involved with HIV. For HIV to be passed from one person to another, there typically needs to be much more sustained body fluid contact such as transfusion with blood that’s contaminated with HIV or unprotected sex with someone who is infected. Neither of these conditions tend to occur during a basketball game, as the following tweet response emphasized:

Basketball referees also usually don’t say, “as a result of the personal foul, a blood transfusion will take place at the foul line.”

By contrast, the SARS-CoV-2 is a respiratory virus. It can spread via respiratory droplets that can come out of an infected person’s nose and mouth. Therefore, an infected person can readily infect others on the same basketball court. That’s why social distancing and face mask use have been ion place at different times during the Covid-19 pandemic.

The next day Spicer followed up about Irving again, this time pushing the inaccurate narrative that your decision to get vaccinated against Covid-19 is no more than a personal choice that only affects you:

This, of course, is not the case. Instead, everyone’s risk of catching the Covid-19 coronavirus depends on whether those around them may be infected with the virus. So yes Irving can keep you safer from Covid-19 and vice-versa.

It’s not clear whether Taylor-Greene saw the Twitter exchanges with Spicer. Regardless, two days after Spicer’s foray somehow tried to compare the two situations with the following tweet on Thursday:

As you can see, Van Gundy made it clear that “the NBA is not keeping Irving from playing” in Nets home games. The NBA and the Nets have simply been complying with NYC regulations.

It’s really not fair to bring Johnson into the Irving-Covid-19 vaccine discussion as Spicer and Taylor-Greene did. Arguably the greatest point guard in basketball history, Johnson has had a long history of offering assists to real science and medicine. He has been a strong advocate for more HIV awareness, research, and prevention. And earlier this year Johnson publicly got the Covid-19 vaccine in order to encourage his many fans to get vaccinated:

Perpetuating misconceptions about HIV, the Covid-19 coronavirus, and Covid-19 vaccines can do lots of real harm. It can be like replacing a basketball with a rock during a game and hurling it at others. The Covid-19 coronavirus and HIV are not the same thing. Comparing these two very different pathogens can be like comparing, oh, some politicians and people who actually understand and appreciate science.