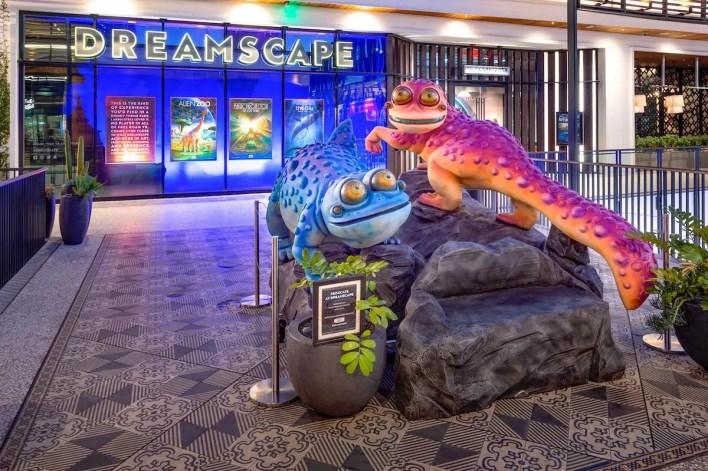 Dreamscape Interactive is debuting a new immersive experience, Men In Black: First Assignment, based on the much-loved film franchise and about to begin showing at its reopened flagship space in Los Angeles.

Making the MIB franchise an interactive one has been a long-held plan, said Walter Parkes, Dreamscape’s CEO. A three-time Oscar nominee, Parkes is also producer with wife Laurie MacDonald of Sony’s three Men In Black films. They in turn were based on a comic book series the couple licensed and developed for Steven Spielberg’s Amblin Entertainment and Sony just before they began running the film division of Spielberg’s DreamWorks SKG.

“It was always struck me as sort of an ultimate target” for an immersive experience, Parkes said. “Unlike a lot of other comic book franchises, the heroes of this one are not superheroes. Rather, they’re humans dealing with all of these extraordinary creatures, which even at the time, we suggested would give us a great opportunity to cast really great actors, which we were lucky enough to do with Will (Smith) and Tommy (Lee Jones) originally. But when you think about it, it almost reflects why it was of interest to us as a DreamScape title, because it’s about human agents dealing with extraordinary realities beyond our reach. It’s a very aspirational world to step into. And that’s what this experience offers.”

Converting three movies, six comic books, and lots of back story into a 14-minute immersive experience calls for a lot of compression, far more even than adapting a movie from a book, Parkes said. So the key was grabbing highlights from across the films that helped express what it meant to be a rookie agent for a secret alien-fighting organization.

“We felt free to pick and choose from elements from the entire franchise,” Parkes said. “So you’ll see Frank (the talking Pug) and you’ll see the worms. But on the other hand, we have the hover bikes in the last Men In Black, because it was actually liberating to be able to take a step back, and just think about how do you deliver some of the essential values of Men In Black in this very compressed way?”

Dreamscape, a location-based entertainment company backed by Spielberg and other Hollywood notables such as composer Hans Zimmer, shut down its consumer-facing locations in several cities when the pandemic hit last year. In May, the company began reopening its facilities, beginning with the flagship location in L.A.’s upscale Century City Westfield mall.

The Los Angeles reopening featured its original complement of four immersive experiences ranging from Alien Zoo to an Indiana Jones-style adventure to one based on the DreamWorks franchise How To Train Your Dragon. The fourth, an underwater adventure called The Blu: Deep Rescue, will be converted for the MIB experience in Los Angeles. Dreamscape has begun ticketing for the MIB experience but it won’t officially launch until Oct. 1.

DreamScape was fortunate in that, despite the pandemic’s wallop to its bottom line, it had already begun to branch out into other uses of its immersive technologies and storytelling experience, Parkes said. That allowed the company to both expand its revenue sources and develop new technologies and experiences that can in turn bolster the consumer-facing business.

“So, while the pandemic certainly put a temporary pause on our location-based work and made it a difficult year in that regard, those same conditions, if anything, accelerated this other work into really interesting things,” Parkes said. “That ultimately will come back and and help the LBE business thrive, in that we’re involved in a bunch of tech innovations that will make the whole process and the whole experience even more seamless. Some of the success in the entertainment side got the interest of education and enterprise, and now the innovations that are coming out of there will come back and help on the entertainment side.”

In the education vertical, as part of a partnership with Arizona State University, the company has created immersive and interactive biology labs for an estimated 1 million students who take such classes every year. The lab experiences were based on technologies initially created for Alien Zoo, which is pretty much exactly what it sounds like.

The company’s other new vertical is scenario training for government, intelligence and military clients, though Parkes said he couldn’t get into details. He laughed when asked if the company was training the real Men in Black as part of the contract, joking that “we should have thought of that in our advertising.”