Just over three years since the release of his first full length solo album, Stop Lying, Raf Rundell makes a very welcome return with his latest, O.M. Days. Rundell’s new ten track album sees him embrace what he does best and run with it in a series of songs that are both breezy and compelling. Having previously worked extensively with Hot Chip’s Joe Goddard on the joint project The 2 Bears, and explored his own solo work with his original EP, The Adventures Of A Selfie Boy Pt. 1 and debut LP Stop Lying, Raf has employed a mixture of those elements to arrive at his latest work. 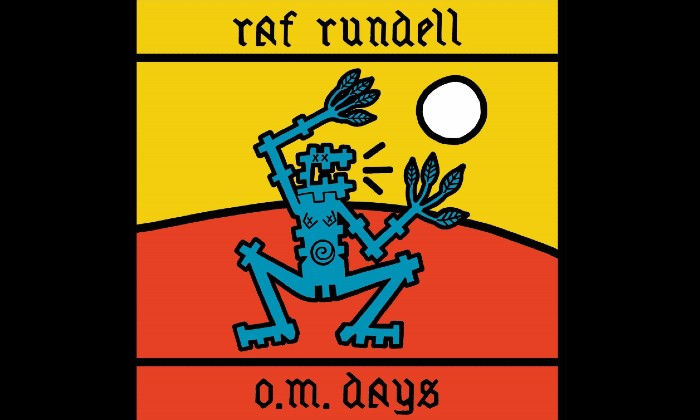 Raf Rundell is no stranger to a collaboration, his work with Goddard in particular has given rise to some great tunes, and on O.M. Days he has used that experience to harness something unique and artistically creative from his partners. Half of the tracks on Raf’s second solo album have arisen because Rundell has joined forces with another featured musician and all, without exception, are exponentially enhanced because of that.

Raf started sharing his new music back in September last year with the lead track, Monsterpiece. The third track on the album, and the first track to be released from it, features non other than Chaz Jankel of The Blockheads. Raf says, “I tried hard to be Ian Dury, But realised I couldn’t, So, I tried my best in a different way, and here we are.” By way of introduction to the album Monsterpiece works wonderfully. The funky little number incorporates 70’s Disco and touches of Dub in an eclectic mix that also includes a repeated flute hook. (Chaz said, “love the flutes two thirds of the way through.”) As the chorus plays out you can almost picture a five piece vocal group in coordinated beige flared suits moving to a slickly choreographed routine.

Three out of four of the singles shared from the album ahead of it’s release have been tracks that have featured another artist and the latest, Always Fly is no exception. Raf teams up with the eminent vocalist and singer-songwriter Terri Walker on ‘Always Fly’ and the resultant track is one of the best on the album. Always Fly pulls further on the Disco thread but gives it a more laid back soulful, R&B vibe with a brilliant keyboard loop, mild Gospel infusion and even some scratching thrown in for good measure!

The second single lifted from the album, Ample Change, features Lias Saoudi of Fat White Family and is an epic musical exploration of slowly evolving percussively lead rhythms that include both bongos and steel drums. The mild and mellow track is as chilled out and relaxing as you could wish for with some lovely looping melodies and repeated verses.

O.M. Days isn’t merely constituted from a series of random singles, it has a coherence and a sound that permeates throughout with Raf Rundell defining the focus of his creation. O.M Days captures your imagination from the electro flavoured opener, More U Know, right through to the close out collaboration featuring Andy Jenkins, Butter Gold. The entire album is characterised by a lightness of touch that incorporates a wonderfully warm, summer scented sound that is difficult to resist. At times you can almost hear the sound of The Style Council, the subtle Jazzy inflections of Tracey Thorn and Everything But The Girl, or even John Grant on Raf’s track Luxury, featuring Man & The Echo. The Ides Of Albion has a calypso feel to the backing track and again employs a bongo beat but at times you are reminded of The Kinks or Peter Doherty, where as Down, the album’s shortest track takes on an almost Trip-Hop persona as it channels Massive Attack’s Karmacoma.

The influences and inspirations are as broad as they are bold on Raf Rundell’s second solo album. The ten tracks that make up O.M. Days are deftly contrived and arranged; each track has it’s individual signature but all are bound by an umbrella of upbeat positivity and joy. Rundell said, “I worked really hard on this one. And although I had no plan about where it was going, I always have a notion about how I want things to sound. I had a particular idea about that.” On O.M. Days Raf has certainly achieved his goal with an album that could easily soundtrack your summer.

Ed Sheeran offers a sneak peek of his Christmas song

Ed Sheeran offers a sneak peek of his Christmas song