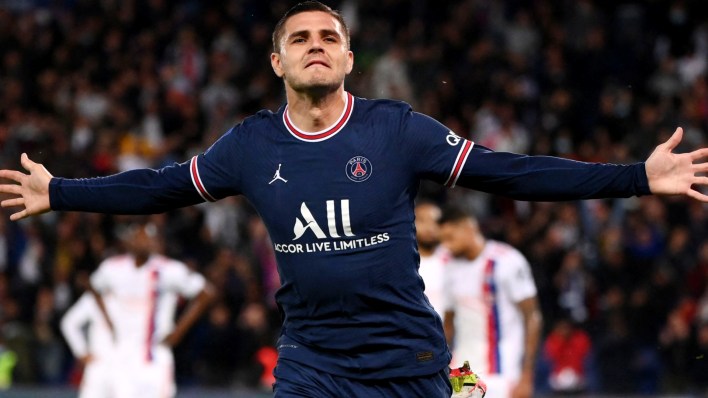 The hero on this day was not named Lionel Messi, Neymar or Kylian Mbappe. It was Paris Saint-Germain substitute forward Mauro Icardi who headed home a stoppage-time winner as PSG stayed perfect to start its Ligue season with a come-from-behind 2-1 win over Lyon. The match was the first time that the ‘MNM’ trio — Messi-Neymar-Mbappe — started a match together in front of their fans, but it didn’t go according to plan.

After an eventful and evenly played first half, during which Messi struck the woodwork on a free kick, Lyon took the lead through Brazilian national teamer Lucas Paqueta and PSG looked in serious trouble. The home team needed a questionable penalty kick to equalize. Neymar earned the spot kick with what looked like a dive in the box and he stepped up to take it himself and equalized 1-1.

The match looked destined to finish 1-1 until Mbappe lofted a cross into the Lyon box deep in stoppage time and connected with Icardi, who had come on in the 82nd minute. Icardi met the cross in stride and guided the ball with his forehead inside the far post as the Parc des Princes erupted into celebration.

That goal came without Messi on the field. The Argentine superstar looked to be having trouble with his left knee but he gave the thumbs-up to the bench that he wanted to continue. His manager, Mauricio Pochettino, did not concur and subbed him off anyway in the 76th minute. Messi didn’t seem too happy about it and his exchange with Pochettino will likely overshadow the victory in the postgame.

It’s well documented that Messi wants to play every minute of every game he features in. Taking him off like this is just a silly move from Poch. pic.twitter.com/YRNhEHMQHS

PSG put together a better performance than its midweek 1-1 Champions League draw in Belgium against Club Brugge, during which the team appeared disjointed, the team imbalanced and the stars out of sync. Against Lyon, PSG’s attacking players didn’t hesitate to go straight at goal when they won the ball. They were decisive with their runs and combinations and forced Lyon goalkeeper Lopes into several saves.

Pochettino’s other lineup decisions that will come under scrutiny involved leaving summer signings Achraf Hakimi and Georginio Wijnaldum out of the starting lineup. Both came on as late subs. The lineup decisions could also have simply amounted to straightforward lineup rotation with another Ligue 1 matchup coming up on Wednesday as PSG puts its perfect record on the line at Metz.

93rd min.: Mauro Icardi scores for PSG! A header deep in stoppage time after a great cross from Kylian Mbappe. PSG are about to win it.

89th min.: Cherki earns a free kick in the attacking half (and a yellow for Nuno Mendes). He takes it himself and the ball falls again to him for a left-footed curler that finishes high. Big chance for Lyon to take all three points.

86th min.: SUBS – Lyon are trying to milk the clock. Lucas Paqueta limps off and Habib Keita takes his place. Georginio Wijnaldum races on the field in place of Ander Herrera.

81st min.: Neymar goes down in the box again on a challenge from Gusto. This time no call from the ref, though it looked to be more of a penalty than the first.

79th min.: SUB – Lyon’s turn to make a change. Cherki, 18, comes on for Shaqiri. Meanwhile Lyon ‘keeper Lopes gets a yellow for delay of game.

74th min.: If the knee was bothering Messi, he didn’t show it. He fires a left-footed blast that goes wide right. Still 1-1. Meanwhile Achraf Hakimi is getting instructions from the coaching staff on the bench.

72nd min.: Lionel Messi looks to be having some trouble with the left knee. He’s bending it as if there’s an issue. But he’s staying in the game for now.

69th min.: PSG’s Marquinhos nearly gets to a cross in the Lyon box, but fresh Lyon sub Diomande gets a touch on the ball to knock it away. PSG close to the go-ahead goal.

66th min.: Goal PSG! Neymar with the casual run-up and finish. No power behind that one. Neymar made him go the other way.

65th min.: SUBS – Lyon makes a sub before the penalty. Diomande comes in for Boateng. And Aouar comes in for Toko-Ekambi.

63rd min.: Penalty for PSG! It’s a dive in the box by Nemyar on the challenge from Gusto, but it doesn’t look like there would be enough for VAR to overturn.

57th min.: Is the desperation already starting? Angel Di Maria with a hopeful cross into the box but no teammates were even close and it goes out.

54th min.: Goal Lyon! Toko-Ekambi crosses a perfect ball and it finds Paqueta who was crashing the box. Messi & Co. are in trouble.

51st min.: Lyon’s Paqueta brings down Neymar for another dangerous free kick. Messi’s already on it, but it’s Neymar who takes it and the ball goes high.

46th min.: The second half is underway. Lyon kicks off. No subs for either side.

Halftime: MNM isn’t intimidating Lyon. The first Ligue 1 start for PSG’s Messi-Neymar-Mbappe attack is meant to strike fear into opposing teams, but Club Brugge earned a draw in midweek and now Lyon is going toe-to-toe with the Parisian superstars. PSG got their looks, but so did Lyon. The visitors were unafraid to attack with numbers, led by Toko-Ekambi and Shaqiri, who were joined occasionally by Paqueta. Lyon goalkeeper Lopes had to come up with a big stop on Messi and then it was the woodwork to stop Messi on another instance. It all made for an entertaining first half for the neutrals and the second half should be just as compelling with the tension and urgency sure to go up by a few notches.

45th min.: Lyon is ending the first half in strong fashion. A stoppage-time corner kick is directed by Paqueta at goal, but it’s a slow roller that Donnarumma handles easily.

37th min.: Messi hits the woodwork! Neymar earns a free kick in a central position. After he gets treatment, Messi takes the attempt and hits the right corner of the frame.

Leo is desperately looking for his first goal with PSG!!! 🔥 Will he score in the 2nd half? 🤔

32nd min.: Neymar feeds Messi and his shot destined for the far post is deflected by Lopes for a corner. Nothing comes of it. That was Messi’s best look of the first half.

27th min.:  Gigi Donnarumma taking a beating in this first half. On a Lyon free kick into the box, Jerome Boateng rams into him and he needs treatment.

25th min.:  After a frantic start, the match is settling down some. Both teams are not wasting any time when they get on the ball. The wingers are the most dangerous players on both sides: Di Maria for PSG and Toko-Ekambi and Shaqiri for Lyon.

18th min.:   What a play by Shaqiri! He curls a left-footed shot from the right side that Gigi Donnarumma has to parry away. Shaqiri is seeing a lot of the ball on the right side and isn’t getting picked up by PSG left back Nuno Mendes. Lyon is not intimidated in the least.

11th min.:   Shaqiri makes a run down the right flank and earns a corner for his side. It leads to two more corners, but PSG manage.

8th min.:   First good chance for PSG. Messi, Neymar and Herrera all touch the ball and feed Di Maria, whose shot is stopped by the ‘keeper. Electric start to this game.

7th min.:   Stoppage in play after Angel Di Maria goes over the ball and fouls Lyon midfielder Caqueret. The ref issues the yellow to Di Maria.

5th min.:   PSG on the break and Kylian Mbappe hits the ground in the box, but there’s no illegal contact there. PSG get a corner but nothing comes of it.

4th min.: Lyon means business. The visitors fire another shot by Another shot by Toko-Ekambi and it’s an easy save for Donnarumma.

3rd min.: Early chance for Lyon and a shot finishes high, but Slimani challenged PSG ‘keeper Gigi Donnarumma and stepped on the goalkeeper’s arm and he needs a moment before resuming play.

2:24 p.m.: Lyon come out for warmups and hear it from the local crowd:

PSG manager Mauricio Pochettino opts to leave right back  Achraf Hakimi and central midfielder  Georginio Wijnaldum on the bench as he continues in his quest to find the best balance for this squad. With the team’s four best attacking players on the field, Pochettino needs the rest of the squad to focus on defending a dangerous Lyon side.

Lyon manager Peter Bosz is lining up in a similar 4-2-3-1 formation with Shaqiri getting the start over the talented Houssem Aouar. A total of 10 of the 11 players in the starting lineup also started against Glasgow Rangers on Thursday.

How to watch PSG vs. Lyon

The match will be televised by beIN Sports, which is available on fuboTV (free 7-day trial for new users ).