“They can boo me, but I keep winning, so happy days,” says Price after moving into semi-final against Stephen Bunting. Jonny Clayton will play Danny Noppert in the other semi-final – watch live coverage of both on Friday night from 7pm on Sky Sports Arena

By Paul Prenderville at the Morningside Arena, Leicester 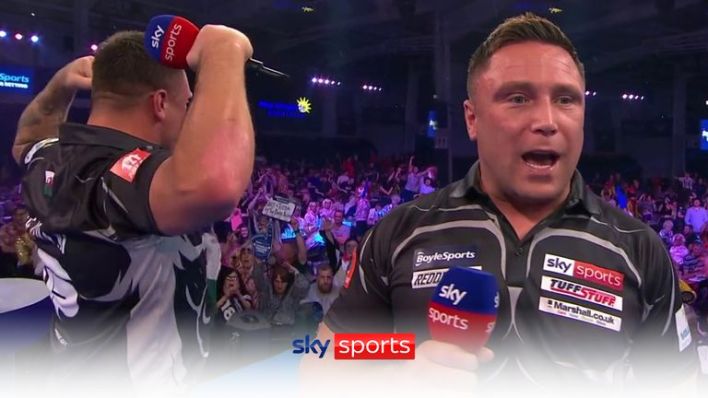 Gerwyn Price warned a jeering World Grand Prix crowd that he will keep on winning after a 3-0 victory over Dave Chisnall kept him on course for a successful title defence.

The Iceman started his run to the world title and world No 1 spot with victory in the double-to-start tournament last year and he took his tally to eight successive wins against Chizzy, who failed to fire.

Price was on the receiving end of some booing from the crowd at the Morningside Arena, but was in defiant mood in his on stage interview.

“There’s a lot more in the tank for me, it was a difficult game,” said Price, who will face Stephen Bunting in the last four.

“Obviously the crowd were a bit rubbish again, but I won, so no matter what they do, I’ll keep winning – give me an opportunity and I’ll take it.

“I thought I had bombed the second set after missing 25, but then I think I took out a 104 next leg.

“They can boo me, they can do what they want, but I keep winning, so happy days.”

Price and Chisnall faced off in the blockbuster quarter-final of the night, but the defending champion was given little trouble in a 3-0 victory over the two-time runner-up.

The pair were meeting in the Grand Prix for the third successive year, Price winning after Chisnall missed match darts in the semi-final last year – while Chizzy’s first-round victory in 2019 was the last time the Welshman suffered defeat in the tournament. 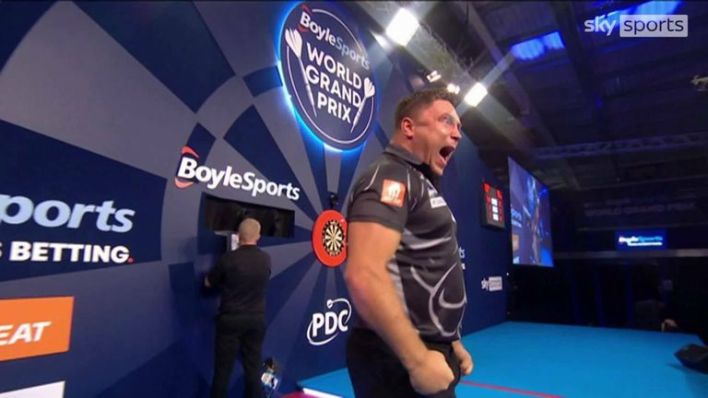 This time around Chisnall missed 17 darts at a double in a contest where Price barely needed to get out of first gear.

His average of 83 was 10 points better off than Chizzy as he swept to the first set. Both men missed five darts at double, but Price pinned the outer ring when it mattered most.

A brilliant 80 got Price off and running in the second, and he then took advantage when Chisnall missed six chances to get his first leg on the board. Chisnall has made a habit of finding his best form this week when behind, and a 118 checkout duly arrived out of the blue and looked to have kickstarted his challenge.

A second leg followed when Price missed four for the set, but the world champion underlined his ability to find the right visit when he needs it most, taking out 104 to move to within a set of victory.

Chizzy came from 2-0 down to beat Ross Smith in the second round, and when he took out 78 to take the opening leg of the third set a comeback looked on the cards, but finishes of 93 and 100 paved the way for Price to claim a dominant win.

Bunting remained on course for his maiden PDC televised title after a 3-1 victory over Ryan Searle saw him into a semi-final showdown with Price in what will be a repeat of their last four showdown at the World Championship. 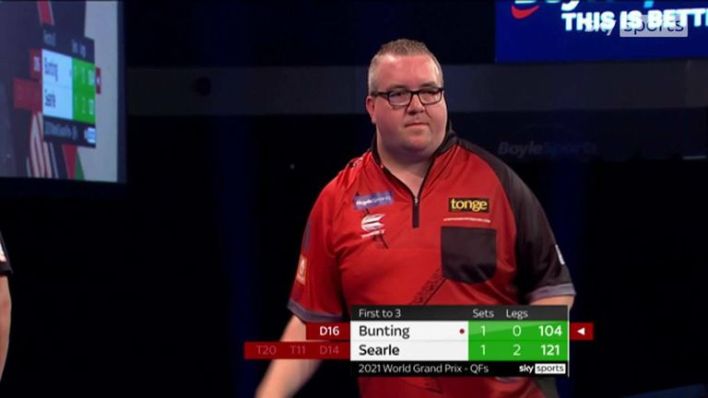 The Bullet reached the last four on his debut in the tournament in 2014 but had not gone beyond the second round in any of his following five appearances, and he was forced to withdraw last year following a positive coronavirus test.

After losing the first set, the former BDO world champion levelled the contest by taking the next.

He looked to be heading for defeat when Searle swept to the opening two legs of the third, but when Heavy Metal missed six darts for a 2-1 lead, Bunting was given the opportunity to chip away. A brilliant 14-dart-leg, capped with a bullseye finish, secured a comeback and the lead.

A match that got more exciting the longer it went on looked to be going the distance, but Searle’s missed doubles – 26 in total – cost him as Bunting wrapped up victory in the fourth. 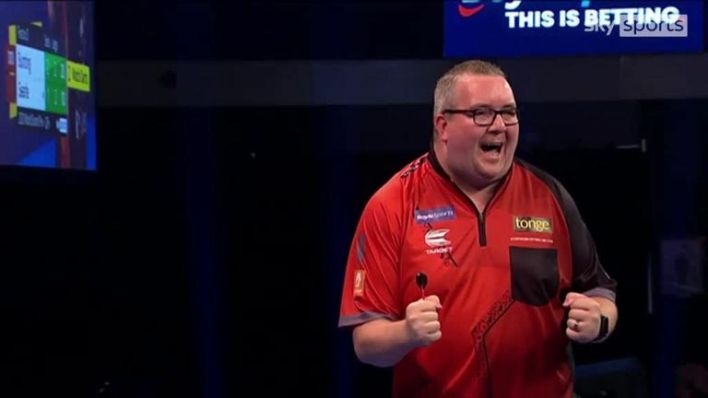 Ferret puts counting problems behind him to stay in title hunt

Jonny Clayton overcame a monumental miscalculation to rally from 2-1 down to beat Krzysztof Ratajski and book a place in the Grand Prix semi-final for the first time. 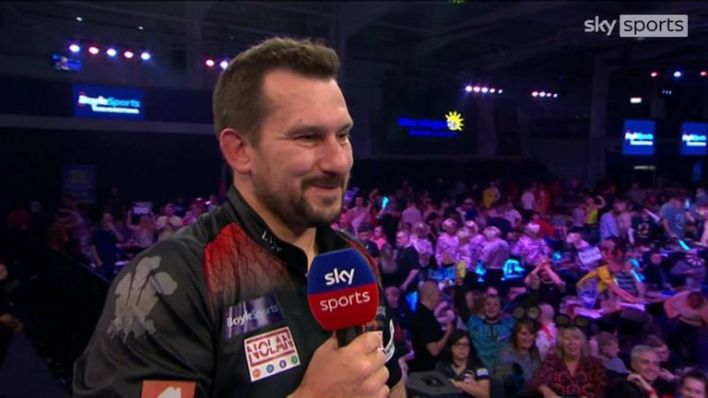 The Ferret arrived in Leicester having won one match in his previous three World Grand Prix appearances, but he moved into a showdown with Danny Noppert on Friday after a rollercoaster contest with Ratajski.

Jonny Clayton is hitting close to two-thirds of his finishing doubles at the Grand Prix.

The match looked as though it might hinge on a big moment in the deciding leg of the second set. After the pair had traded big finishes, Clayton – having won the opener – had 134 left, to Ratajski’s 154.

The Ferret managed to bust his score, and while Ratajski couldn’t take out his three-figure finish, he left just 20 and pinned double 10 on his next visit to level the contest. 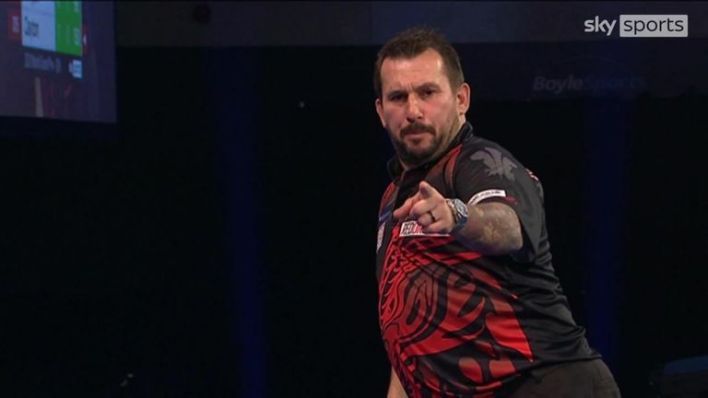 With the third set all square at two legs each, both men got down to 170. Ratajski missed the bullseye for a maximum check-out, but when Clayton also fell short it was the Pole who hit double eight for a 2-1 lead.

Clayton gathered himself brilliantly to reel off three legs on the bounce and force a deciding set, and his coolness prevailed as he took the three legs required for victory and a place in the last four.

The Ferret has won the Masters and the Premier League, along with two Pro Tour titles, but he now stands just two wins away from the biggest ranking title of his career.

Noppert too good as White falters

Noppert continued his blistering form, averaging 96 to beat Ian White 3-1 and leave the Diamond reflecting on another major quarter-final defeat.

Noppie blew the bottom half of the draw wide open when he took out Michael van Gerwen in the first round, while White had taken care of Gary Anderson, but it was Noppert who proved too good as White lost in a major televised quarter-final for the 11th time. 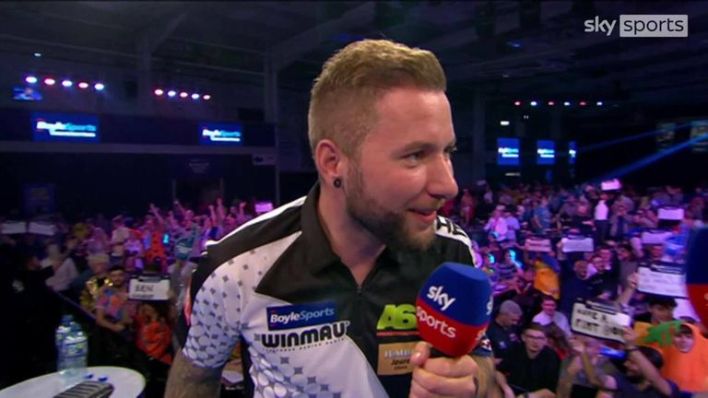 Diamond hit back to claim the first two legs of the next, but a missed dart for a 3-0 sweep let Noppie back in to force a decider. Needing double 12 for the set, White edged into double nine but held himself together to pin double three and level the contest.

With the crowd roaring White on, Noppert seized the initiative in the third set – a nerveless double four was followed up with a look towards the crowd – but the Englishman found the first big-finish of the contest as he nailed 104 to take a second straight set the distance. 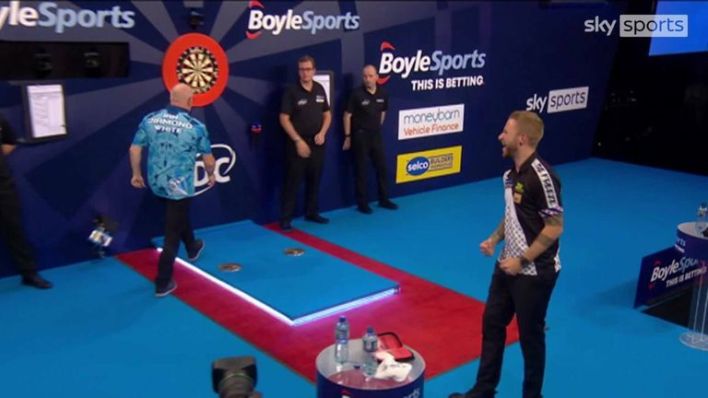 Noppert took the final leg to move within one set of the last four and, amid needless booing from the crowd, he then found a 116 finish to start the fourth set in perfect style.

White had no answer, Noppie completing a sweep and sealing his place in the last four with a brilliant bullseye finish to remain on course for a maiden major title.

Join us for the World Grand Prix semi-finals on Friday night, live coverage gets underway at 7pm on Sky Sports Arena