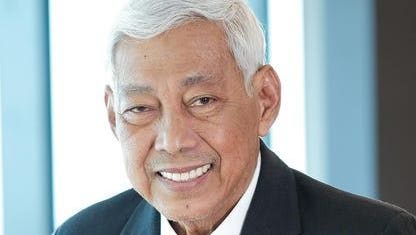 “It is with great sadness that the board of directors and management of D.M. Wenceslao & Associates announce that it was informed of the death of its president and chairman of the board, Delfin Wenceslao Jr.,” the company said Friday in a filing to the Philippine bourse. The company didn’t provide other details.

Founded by Delfin Sr. in 1965, D.M. Wenceslao came to be known for its expertise in land reclamation. One of its largest projects is Aseana City, a 204-hectare (2-million square meter) mixed-use commercial and residential project, along the shoreline of Manila Bay, according to the company’s website.

Delfin Jr., who took the company public in 2018, held a degree in economics from Ateneo de Manila University and an MBA degree from the University of Manila. He was keen to join the military but his father, a military engineer, persuaded him to pursue a more peaceful career in construction.

With a net worth of $385 million, Delfin Jr. was ranked No. 37 on the list of Philippines’ 50 Richest that was published earlier this month. He is survived by his wife Silvia and his four sons, who are all involved in the business. Their youngest son Delfin Angelo is the company’s CEO, while another son Paolo Vincent is chief operating officer.

One Promising Stock To Buy After A Rough Month

One Promising Stock To Buy After A Rough Month