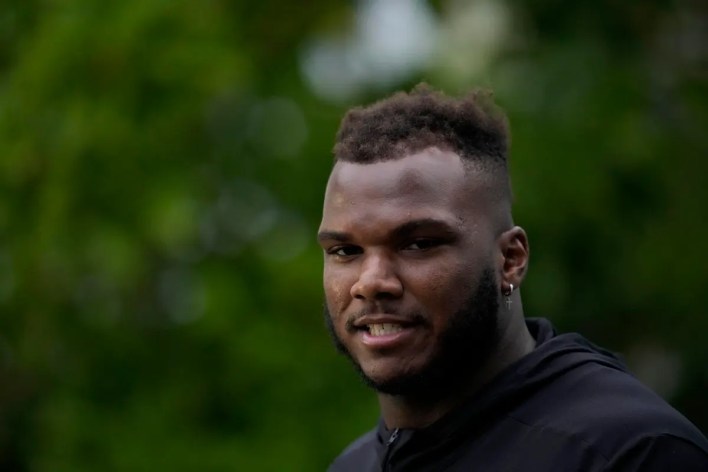 John Franklin-Myers celebrated the signing of a contract extension Thursday, worth $14.815 million in fully guaranteed money, by taking a flight to London later that day.

OK, so it wasn’t exactly a sightseeing trip. The 25-year-old defensive end and the rest of his New York Jets teammates are in London to play the Atlanta Falcons on Sunday at Tottenham Hotspur Stadium.

“The Jets gave me an opportunity and I’m grateful for that and I owe them,” he told reporters Friday in England, where the Jets flew to play Atlanta on Sunday. He later became emotional when talking about his young son, saying, “I play football for him. I just want to give him every opportunity.”

The contract is worth $30 million in total guarantees per overthecap.com, including a $10 million roster bonus next season. The Jets would be on the hook for $13.7 million in dead money if they cut Franklin-Myers next season, but the guarantees become much less financially debilitating for the club beginning in 2023.

Still, they are hoping he is around for a while. For the Jets, this appears to be a key part of the vision of general manager Joe Douglas. That is, developing and retaining young players, even ones whom the franchise did not draft.

Franklin-Myers came to New York as a waiver claim by Douglas in September 2019. He was drafted in the fourth round by the Los Angeles Rams in 2018 and waived at the end of the 2019 training camp.

“JFM is a stud,” coach Robert Saleh, said Friday, one day after the signing. “When we first got here (in  January), we studied all our players and the one of the guys that stood out to us was JFM. Obviously, among other guys, but he stood out. … We felt he could be a really great fit for our system and what we ask out of our defensive line and he has done nothing but work, work, work. He’s been a tremendous leader and then you see his play on the football field. He’s absolutely dominant at times.

“When you have guys who do things the right way,” he added, “you have guys who are leaders in the locker room and they produced to his level…those are the guys that we want to pay, so JFM is deserving of it and we couldn’t be happier to have it done.”

The next “JFM” for the Jets, that is, waiver claims who eventually get paid, could be Quincy Williams. He is the older, but somewhat less celebrated brother of their 2019 first-round pick, Quinnen Williams. Quincy, an outside linebacker, was selected by Jacksonville in the third round of that same 2019 NFL Draft, but was waived at the end of this year’s training camp. Sound familiar?

He, too, was claimed by Douglas, and has quickly ascended to a starting role. In the win over Tennessee last week, he and Quinnen became the first pair of brothers to both record a sack for the same team in an NFL game.

“I think Joe Douglas did a great job picking him up off waivers,” Saleh said. “And you see Quincy’s been getting better every week. He still has a lot of stuff to get better at, but you saw the splash plays and the explosiveness and the speed and length that fits our defense.”

That “stuff” actually may include his youthful exuberance, as the third-year player has a tendency to over-pursue and take himself out of a play. It happened at least twice against the Titans, and on another play, he probably should have incurred a penalty for hitting an intended receiver before the ball arrived.

Still, the talent is there. Williams is making only $850,000 per overthecap.com, the NFL minimum for his level of service time. His rookie contract ends after the 2022 season, and if he keeps performing at the level he did against Tennessee, Williams could put himself in position for an extension of the type Franklin-Myers received.

Mims active. Usually, this formula applies to draft picks, not waiver claims. But 2020 second-round pick Denzel Mims has had a tough time making an impact in his sophomore NFL season, after a bout with food poisoning curtailed his spring and an influx of new wideouts pushed him down the depth chart.

He had one catch for 40 yards in only three snaps against Carolina in the season opener, but then was inactive for two games. Mims finally dressed and had 10 snaps against the Titans, but wasn’t targeted.

“It’s been different,” Mims said Wednesday in his first media availability since August, but he added, “My goal is to be supportive (to my teammates)…try to help them any way I can, no matter what it is.”

When he was asked if he would like to be traded to a team with which he would have a bigger role, he cut off the questioner and said, “I’m not worried about that, my main focus is this game, this week. That’s my focus right now.”

He admitted his lack of use has been frustrating, adding, “I try not to worry about everything that’s in the past. I try to focus on everything in the future.

“I can’t control their decisions,” he added, “but one thing I can control is my effort and my attitude.”

Mims is active against the Falcons. Will he be a part of the game plan? We shall see.

It remains to be seen how this will play out, and not just Sunday, but it will be disappointing for all sides if the Jets don’t get more production from a second-round pick. Douglas’ performance in the waiver market is remarkable—he also has gotten wide receiver/kick returner Braxton Berrios and running back Ty Johnson via that route—but it can’t replace the draft.

We Finally Know Where The Walking Dead’s Rick Grimes Is