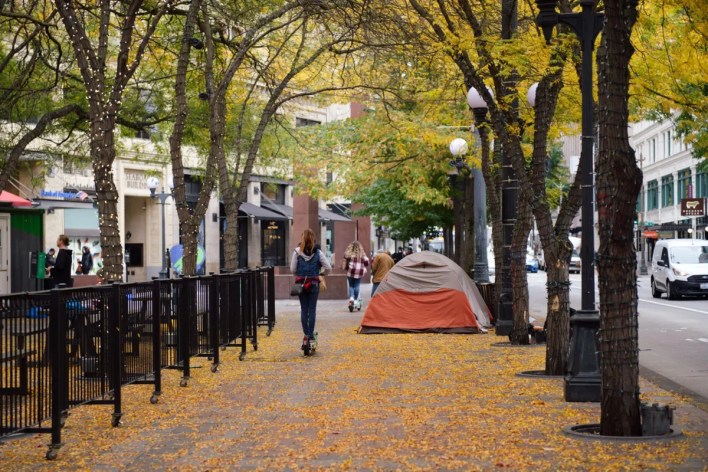 It’s been a housing kick here, for good reasons. Availability is too slim; prices are crazy and getting worse.

Forget buying a house—many millennials already have. They don’t have the down payment and, according to one survey, half of those who don’t already own a place have given up even trying to save for it. Prices keep rising, there’s a chronic lack of reasonably priced properties for sale, especially as those with money move ahead, buy more modest places, tear them down, and build something large. Listing prices have jumped by more than 24% since 2017.

Those who can’t own someplace are forced to become part of the likely permanent renter class. Now comes the other bad news: rents are racing upwards in price.

Property tech site Zumper, which is an apartment rental marketplace, came out with its October 2021 rent report (I’m linking to an archived version to ensure consistency). Check some of the median 1-bedroom rent prices:

The only city in the top ten under $2,000 was Scottsdale, Arizona, at $1,890. The explosion of rent is a bigger issue than one group of cities, as the report states:

“Since March 2020, the median one-bedroom rent is up 11.8 percent, while two-beds are up 14.3 percent. With home prices having also skyrocketed during the pandemic, the explosion in housing costs is a primary driver of inflation fears.”

As the site also notes, the result becomes a blockage. Many people who might under gentler times have purchased a house and moved beyond the rental system, increasing supply and likely lowering prices, are still in a rental. More people who need rental housing, which is making it a hot commodity to build in the commercial real estate market (apartments, professionally called multifamily, are a huge business).

Such concentrated jumps are an example of why inflation can be so murderous. What does it matter if you can get inexpensive canned tamales? More and more of your income is absorbed by the need for shelter, which becomes money invested on another’s behalf without any chance that you’ll see a return yourself.

By channeling so much income into housing, the millions of people don’t have it to build wealth through investments, which ultimately passes on to other uses.

The bigger question is how long they will be able to afford rents of any kind. The financial pressure had already become bad. A Center on Budget and Policy Priorities analysis showed that between 2001 and 2019, median renter household income grew by only 3.4%, while median rent was up 15%. Much of the difference came down to long-lasting problems from the Great Recession, as median incomes dropped and didn’t regain the loss until 2017.

Now, there were some significant drops in rent early in the pandemic. But prices have come roaring back. August 2021 was the first time that national rent growth hit double digits—11.5%, year over year, or an additional $169 per month for renters—according to the National Association of Realtors. That’s even faster than home price growth, which was up 8.6% that month.

How long is it possible for this to go on? Many people in real estate assume that because people need a place to live, rents can continue their climbs. But there isn’t an infinite ability to absorb ongoing increases because people also need to eat. They need healthcare. They need transportation to and from work. They need childcare.

We have an odd relationship to one another in this country. There’s the underlying assumption that economics has no bounds, that there is an inherent right to absorb as much value from one another that there is to take. But it’s mathematically absurd. A stable society needs stable systems in which people can obtain what they need. Drain that capability from others to further stoke your own wealth and you’re committing what used to called suboptimization.

It may be great for you personally, but terrible for society. Eventually, you must live in what that society becomes, and that could become repellently ugly. Money can shield you only for so long.

3Q21 Earnings: Where The Street Is Too Low & Who Should Beat

3Q21 Earnings: Where The Street Is Too Low & Who Should Beat

The Power Of One: Why It’s More Important Than Ever To Push The DEI Agenda In Your Organization