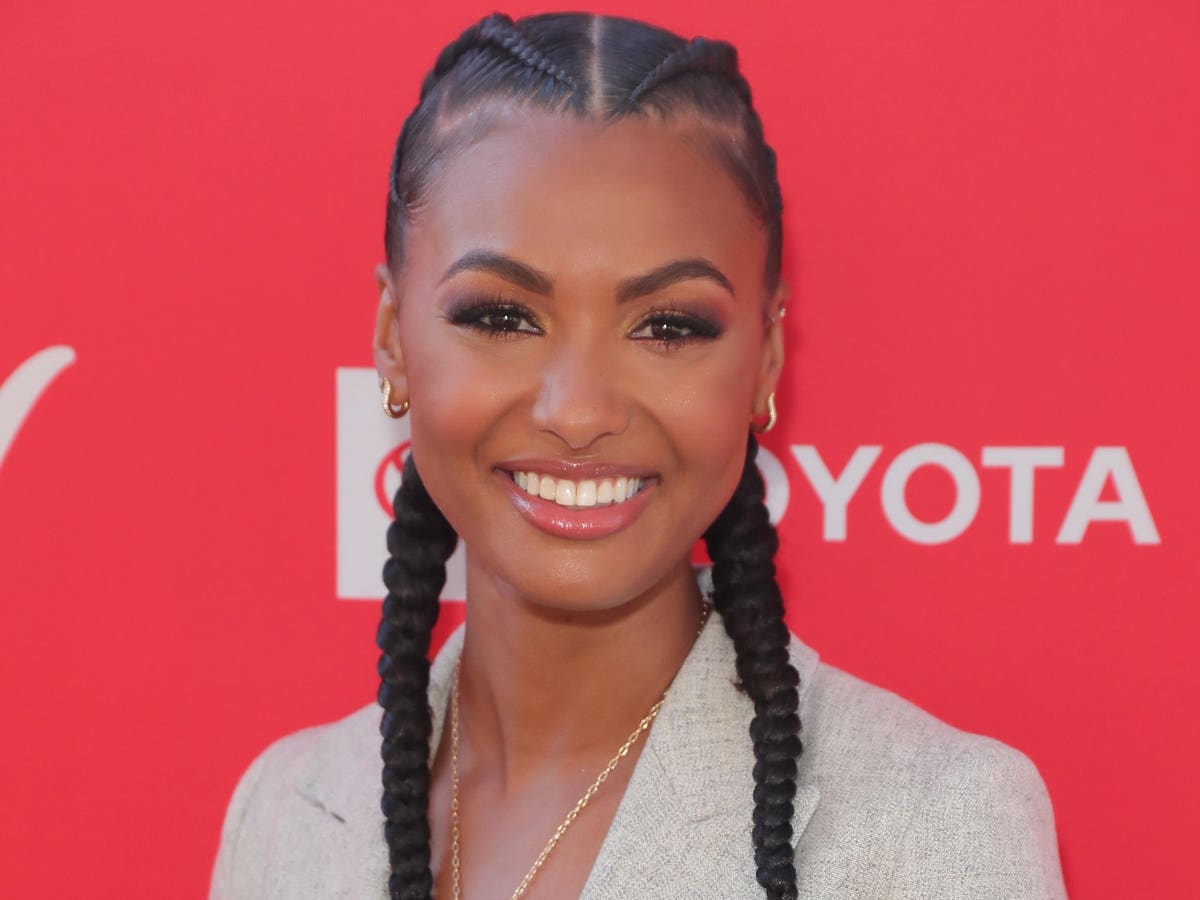 Malika Andrews is a star on the rise in sports media.

Andrews is a member of the National Association of Black Journalists, sits on the NABJ Sports Task Force Scholarship Committee, was honored with the 2021 NABJ Michael J. Feeney Emerging Journalist of the Year Award.

I caught up with Malika and we spoke about her becoming a sports fan in the Bay Area, what advice she has for up and coming journalists, and her new show, NBA Today.

NBA Today airs Monday-Friday on ESPN and can be heard on ESPN podcasts.

Grove: What is your earliest sports memories?

Andrews: Wow. I’m not sure if things are memories or if my parents have just told you about them so many times that I feel like I have a memory of them. I grew up in Oakland so my parents were huge fans of the Golden State Warriors, San Francisco 49ers, and the Raiders. So I grew up going to Oracle in the early 2000s and I think that’s what I remember because it’s been told to me so many times. We would go as a family when the Lakers had Shaq and Kobe. They were the most hated team because on the road, the Lakers fans would travel and take over Oracle. That was just the worst because it was a home game basically for the Lakers. Those are kind of my earliest professional sports memories.

Grove: Is that when you first cultivated your love of basketball and journalism?

Andrews: You know, it’s interesting, because my love of journalism and love of basketball were entirely separate. There are some people who get in this industry because they just love the sport. I loved the sport but my love for journalism was always separate. When I got to college, I loved to write, I always loved to listen, and I was always curious but I never thought that those two things we’re going to combine. When I started in the school paper and the only opening they had was in sports, I thought because I knew the rules of the game that I could do it. But really, I think I fell in love with sports as a past pastime and storytelling and journalism as a profession. When I realized I could meld those two things together. It was pretty special.

Grove: I must ask you this: Who wins the sports debates between you and your sister Kendra?

Andrews: [Laughs] My dad when he enters the group chat with the sunglasses emoji.  I think Kendra wins. I like to get into the facts and figures of things and Kendra will look at me, nod and say, “Yeah.  All that’s true, but at the end of the day….” I’ll keep going back to my numbers and my quotes and you know what you might be you might be right. It’s just at the end of the day it’s a feeling. When I debate, I like to be the person in the middle, not the one on the left or the right.

Grove: At the University of Portland, you also met Adrian Wojnarowski? How was it to meet one of most renowned NBA reporters as student?

Andrews: He came to interview Terry Porter, who was the first-year head coach at the University of Portland during my senior year. I think a lot of people think of him as you know, as the Twitter news breaker but he is a newspaper junkie. That’s how he is this good because he has that kind of curiosity.

He was walking around campus with the school paper because we hadn’t quite yet gone digital. This was like one of the last papers before we moved to online only. We had these newsstands around campus and Adrian walked by, saw Terry Porter on the cover of the of The Beacon, and picked it up. It was also the week of the Nike Hoop Summit and I got a credential to go.

I went up to him with my knees knocking and introduced myself. Actually, I think Marc Spears might have introduced us. Adrian said, “Oh, I know who you are. I read. I read a story of yours just the other day at the University of Portland.” I mean, my jaw up off the floor, man. I was recounting this story the other day, when I went speak to a class at the University of Southern California. They asked me, “What was it about this story that was so special that made him take notice of it? I don’t know, that’s something you’d have to ask him. I’m not going to pretend that it was an incredibly written story. I think it to get in this industry requires requires skill, hard work, and preparation but it also requires a little bit of luck. I got lucky and that’s okay. My dad always says it’s better to be lucky than be good and if you can be both, then you’re really cooking.

Grove: Being young and a woman of color, how did you navigate an industry that’s male-dominated?

Andrews:I think I was really lucky to have a lot of really smart, really talented people in my corner from an early age. I think I sort of approach it like when I was building sources in Portland. That’s how I approached other journalists. Portland is a small sports journalism community and there’s not many professional sports so there’s not that many sports journalists. But the ones that are there are so well-known and they’re beloved by the fans because it isn’t a high market but it’s highly concentrated. When I was in school, I really tried to get to know people, grab coffee, send the emails, picked the brains, and pretty pleased as many people as I possibly could. Because I got that start, I felt like by the time I got out of school, there were enough people in my corner guiding me. There was women like Ramona Shelburne and Black men like Marc spears. I’m one of those constant learners and watching how people went about their jobs was really helpful to me. It was very helpful when I got to know more Black women in the industry. We’ve made so many strides and at the same time, not in commentary, not in television because at the time I was a writer and there were very few. Candice Buckner was from the Washington Post was the first Black woman reporter print that I ever met and that was really formative. There are still aspects in which we are fighting to get into certain spaces. Just because someone doesn’t have the exact background you do, you can still learn from them. There were so many wonderful Black men who paved the way for me as there were a handful of Black women but there were also some white men who I wouldn’t be here without them. So I think the realization that every single person that I came into contact with had something to share, something to teach with me. I think that’s what was helpful.

Grove: Tell me how was the feeling when you heard the news that you would be hosting NBA Today?

Andrews: I’m smiling right now. I don’t know if it’s not even fair to say I’ve always dreamed of this because I’m not sure that I was dreaming big enough to envision this. I feel so lucky to be trusted by the network, by Dave Roberts, Norby Williamson, and Jimmy Pitaro to shepherd our next chapter of NBA coverage. ESPN is the premier place for the NBA. I truly believe that we have the most incredibly talented journalists and analysts on our team and getting the opportunity to work with them is one thing but to be tasked with being the person that gets to showcase all of their strengths is amazing

I found out about this I was walking actually in LA and I was walking through the Venice Canals and I got a phone call saying that this is what’s happening. I was very grateful that my boyfriend took a photo of me when I took that phone call because I don’t get that sort of look on my face very often. I’m glad that I have that as a touchstone that I’m going to get to look back at every once in a while when the days get long because it’s a lot of work because this is this is special.

Grove: What separates NBA Today from all the other basketball shows on the sports landscape?

Andrews: We have the best reporters in the business at ESPN and highlighting that reporting is going to be something that is on full display. Even with Woj as the premier news breaker in the NBA and having his insights on NBA Today is something that you shouldn’t miss. It’s going to be a fast show. This is going to be a show that incorporates everything you love. It has film breakdowns, breaking down different match ups, it has news, it has analysis, we have fun, and it has silliness. What I’m looking forward to is this being recognizable in some ways, in the best ways, it’s a hodgepodge of all of the best aspects that we have to offer. You can’t blink because we’re going to be packing so much into these shows that if you do, you’re going to miss it and you’re going to want to watch it again.

Grove: Lastly, what advice do you have for aspiring journalists and sports reporters? What would you say to an up and coming “Malika Andrews” who’s trying to make a name for herself in sports media?

Andrews: I would say work hard on getting to know the people in this industry that can hire you just as much as you work on your craft. Working on your craft, you need to be prepared, you need to be good, you need to be working on that. At the same time, people need to know that you are available to be hired. In this industry, there’s a lot of applications that come in and being known early is really helpful. As I said, it’s also about luck. Don’t just think that it’s hard work and that’s it. That’s a big, big, big piece. Don’t let anyone who got there tell you that they didn’t earn it because they did. But also, they did get a little bit of fairy dust in there because this is a competitive industry. If you’re an up and coming Malika as a Brown or Black girl, you’re not only wanted in, but you’re needed in. You’re absolutely needed in this space.