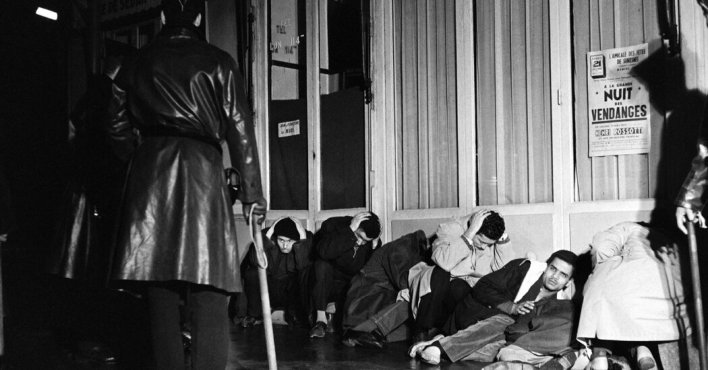 On Oct. 17, 1961, as the eight-year conflict was nearing its end, Algerian National Liberation Front independence fighters called on Algerians in Paris to organize a peaceful march to protest a nightly curfew that was being imposed on them after a spate of deadly attacks on French police officers.

About 20,000 to 30,000 people turned up, and the police crushed the march before it could even begin. They arrested 12,000 protesters, beat some to death, and shot or threw others into the Seine River, where they drowned.

For several weeks, unidentified corpses were found along the river banks.

In addition to the dozens killed that night, many others fell victim to police raids and violence that had begun that September and continued for several days after the scheduled protests. Over that period, historians estimate, the total death toll was 100 to 200 people.

Fabrice Riceputi, a historian of the Algerian War who has written about the killings, described the events of Oct. 17 as “a peak in a period of state terror that is inflicted on the colonized people.”

But for decades the French state maintained that the official death toll was just three.

It was only in the 1990s, after the groundbreaking work of the French historian Jean-Luc Einaudi, that the extent of the police’s actions began to be uncovered. His findings were made public as part of a trial in which it was also brought to light that Maurice Papon, the Paris police chief who ordered the suppression of the protest, had earlier participated in the deportation of more than 1,600 Jews during World War II.

“From the start, the government imposed silence,” Mr. Riceputi said, adding that it had blocked calls for the creation of a parliamentary commission to investigate the killings, civil cases filed by Algerians seeking justice and access to key archival documents.

Back in Chicago, Woman Is Charged in Killing of Mother on Indonesian Vacation

Back in Chicago, Woman Is Charged in Killing of Mother on Indonesian Vacation