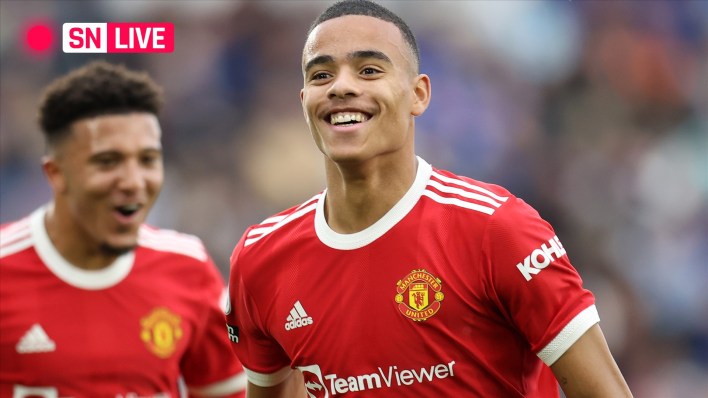 In one of the best matches of the Premier League weekend, Manchester United will look to get back on track against a Leicester City team that is hoping to make up for lost ground.

Manchester United (4th, 14 points) is coming off a loss (at home to Aston Villa) and a draw (1-1 vs. Everton). With Chelsea, Liverpool and Manchester City rolling over opponents, Cristiano Ronaldo & Co. can’t afford to drop more points.

The Red Devils will be facing a Leicester City (13th, 8 points) side that has been underwhelming in league play (2-3-2 record) despite high expectations entering the season. Foxes veteran Jamie Vardy, the second-highest Premier League scorer this season (six goals), would no doubt take great satisfaction in outshining Ronaldo at home.

Sporting News will be following Saturday’s match live and providing score updates, commentary and highlights as they happen.

Halftime: That first half will be remembered for the two great goals, but Leicester City was clearly the better side. Brendan Rodgers got his formation right for this one and the Foxes are bossing the midfield and getting through it easily. Then the Leicester forwards have Man United’s defenders on their heels and that’s not been a positive for Harry Maguire, who only started training late in the week and is looking off his game. The next goal looks most likely to come from Leicester. The five-man back line has kept Cristiano Ronaldo in check on the other side. Jadon Sancho is once again invisible.

49th+ min.: Dangerous set piece by Leicester. It’s a play right off the training ground for the Foxes and Lindelhof puts it out for a corner before Vardy can get to it. Then the halftime whistle sounds.

46th+ min.: Cristiano Ronaldo attempts the bicycle kick, but Leicester right wingback Ricardo Pereira heads the ball away before it can reach the Man United star.

40th min.: Leicester City plays out of the Man United pressure and the ball ends up on the foot of Kelechi Iheanacho, whose low show barely misses the left post.

31st min.: What an equalizer by Leicester City! High pressure from Leicester and Iheanacho steals it from Maguire, serves Youri Tielemans, who lobs De Gea with one of the prettiest goals you’ll ever see.

28th min.: Cristiano Ronaldo shot punched away by Kasper Schmeichel. The ‘keeper saw it at the last minute. Good reaction.

27th min.: Ricardo Pereira sends a ball across the face of the goal and it comes within inches of the far left post. When Leicester attacks, it’s managing to penetrate fairly easily.

21st min.: Leicester responds by creating chaos around the Man United box again. It ends with a Vardy shot right at David De Gea. Here’s what you have to know about how good Greenwood’s been:

Most Premier League goals by players aged 21 or under since Mason Greenwood made his debut:

19th min.: What a goal Mason Greenwood!!! He fires another left-footed shot from the right side and it goes into the far upper 90. Fantastic strike. Greenwood has been one of Manchester United’s best players so far this season.

17th min.: Corner kick for Manchester United and Paul Pogba heads high, but he was off balance on the attempt.

13th min.: First shot on goal by Manchester United via Mason Greenwood. He sprints down the right and puts the ball on his left foot, but his attempt is right at goalkeeper Kasper Schmeichel.

10th min.: James Maddison spins Victor Lindelhof around before getting a shot off.  That was weak defending from Lindelhof.

this has been 10 minutes of Manchester United getting spread across the King Power like butter on hot toast.

9th min.: Youri Tielemans is up for this one. Some good passing to start from him, and Leicester are buzzing around the Manchester United box. But Manchester United captain Harry Maguire holding things together.

Leicester very lively in the opening exchanges. Had a couple of very promising positions already. Maguire had to be sharp a couple of times – and he has been #mufc

5th min.: What a run by Kelechi Iheanacho for Leicester. The ball ends up on the feet of Youri Tielemans in the box, but his dangerous cross in the box is cleared by Harry Maguire. Foxes threatening early in transition.

#mufc midfield already loose. Matic has already made a tactical foul and Pogba has twice lost the ball to spark counter-attacks. Iheanacho just skinned him and Maguire for a good opening. That’s brought Solskjaer out into the technical area.

9:05 a.m.: Marcus Rashford’s back and available off the bench.

Leicester look to set up with a five-man back line against the loaded Manchester United attacking front. Jonny Evans was a question mark because of an injury, but he makes the lineup while Jannik Vestergaard is on the bench. Wesley Fofana and Wilfried Ndidi are the big injury absences for Leicester City.

Manchester United center back Raphael Varane picked up a groin injury on international duty, but Harry Maguire joined practice late in the week and is considered fit to start. In addition, midfielder Fred and forward Edinson Cavani will be sitting out after playing on Thursday in the Brazil vs. Uruguay World Cup qualifier. Paul Pogba takes Fred’s spot in central midfield with Jadon Sancho getting the start.

How to watch Leicester City vs. Manchester United

The Leicester City vs. Manchester United match will be carried in the USA in both English (USA Network) and Spanish (Universo). Both channels are streamed on fuboTV , which is available for a free 7-day trial to new subscribers .

‘Not enough South Asian coaches at top end of game’

‘Not enough South Asian coaches at top end of game’

Why did Adele get divorced? Marriage with Simon Konecki explored as 'Easy on Me' breaks records