In the four-and-a-half years since Laura Marling last toured alone she has not only given many on-line guitar tutorials she has also released yet another Mercury Prize nominated album and collaborated with Mike Lindsay for two LUMP albums. Laura has not exactly been taking a break since she toured the incredibly powerful album Semper Femina back in 2017. CoVID19 and lockdown restrictions have done nothing to diminish Marling’s creativity or spirit. Not only was she one of only a handful of artists that decided to bring forward the release of new material, rather than delay it because of the pandemic, Laura was also a pioneer of on-line concerts, performing most memorably at The Albert Hall and The Union Chapel. Talking about the early release of her last album, Song For Our Daughter, Marling said she hoped “that at the very least (it) might entertain, and at its best, provide some sense of union.” It surely did both. 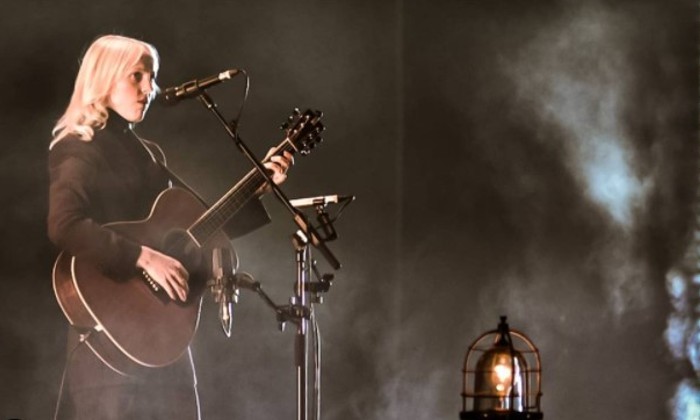 Back on the road in 2021 Laura Marling is literally all alone. Last time around, although she did perform part of her set completely solo, she did have a full band with her. This time there is no band and no support, other than from the partisan crowd, and very possibly her mother, although this is unconfirmed speculation on my part!

Dressed impeccably in an understated trouser suit, and surrounded by six floor lights, one further waist high lamp and a one armed torso, Laura Marling commanded your attention from the moment she entered the stage. The opening four songs were delivered note perfect as Marling held her audience captivated by an immaculate performance. Drawing on her 2013 album, Once I Was An Eagle, Marling was mesmeric as she played out Take The Night Off, I Was An Eagle, You Know and finally Breathe in order. Both Laura’s voice and her guitar playing were extraordinary, even given the fact that she had a “hang nail”. “I’ve had it for a week” she said. Explaining that she’d tried to deal with it by using Sellotape and nail varnish, Laura said, “this is not a great story by the way” as both she and the audience laughed.

Having set the bar very high from the off Laura Marling continued in the same vein throughout the 22 track set. Songs from all but one of her albums, her 2008 debut Alas I Cannot Swim, were included in an impressive collection that once again showcased the remarkable song writing talents of the multi-award winning artist. Both Salinas (“My mother was a saviour of six foot of bad behaviour”) and Sophia, from A Creature I Don’t Know were received very well, but it was three tracks that proceeded them that were even more memorable for very different reasons.

What He Wrote was just one highlight from the evening, Laura seemed completely lost in the moment as she sang and played. The End Of The Affair, one of six tracks included from Laura’s last solo album, was introduced by Laura saying that when the album was released she’d received two emails, from the two people she knew called Max, asking if there was anything they should know. One of them was from Max – her therapist, who was obviously curious as the opening line of the song starts, “Max came around one day, Very much nothing to say.”

At the midway point of the evening Laura Marling threw in a curve ball with a new track. To excited gasps from the audience Marling explained that she had been inspired to write the song after seeing Fatima, the ballerina, in a Government backed ad that said, “Fatima’s next job could be in cyber”. She said it was “Profoundly irating…to take something, especially like ballet, which is a dying art, and belittle it that way”. “So I wrote the song in that state” she said before performing the new, out of character, track. “I  hope you understand why it’s not going to be released” she said, “it’s a tiny bit on the nose” before singing “You don’t hate Monday’s, you hate getting f***ed in the t**s. I was an artist before I became this. Can you believe I used to do this for free”. Rapturous applause and shouts of approval rung out around Brighton Dome as Laura sang her new song, with many suggesting that she should release it.

All eyes were on Laura throughout the night as the all seated audience were treated to numerous highlights from her very impressive back catalogue. Once, and latterly Wild Fire were clear favourites as the evening progressed and Laura’s performance was given yet more focus through modest but carefully executed lighting. One such track that benefited the most was her ever emotive track – Goodbye England (Covered In Snow). The shafts of white light that back-lit Marling as she played the guitar made the already beautiful performance all the more magical.

Laura Marling closed out a great night with the title track from her last album, followed at the end by it’s close out track, For You. There was, as ever, no encore – “I’ve left the best songs ’til last she said”.

There was only one whoops all night as Laura hit a duff note on one song but other than that Marling’s performance made the hairs on your arm stand on end with it’s precision, clarity and quality. Hearing Laura Marling sing is akin to a religious, spiritual experience; you are held transfixed by a performance of such devastating purity.