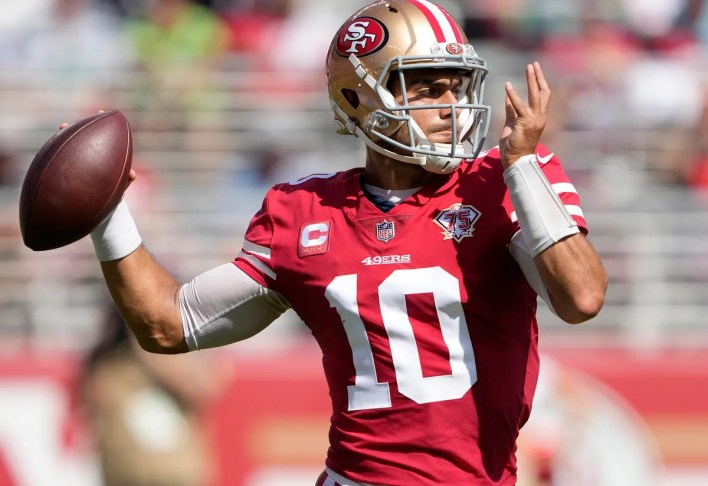 Jimmy Garoppolo will be back as the San Francisco 49ers’ starting quarterback on Sunday when they face the Indianapolis Colts in primetime in a matchup that could mark his last chance to prove he should remain in that position ahead of Trey Lance this year.

Garoppolo will know that, for all intents and purposes, this is his final season with the Niners. San Francisco traded three first-round picks to acquire Lance and will want to see a return on that investment in the not-too-distant future.

But head coach Kyle Shanahan has made little secret of the fact he does not believe the third overall pick is ready to take the reins yet and, with Lance out injured after suffering a knee sprain in his start in relief of Garoppolo against the Arizona Cardinals, the former New England Patriot will be tasked with getting the 49ers back on track after three successive losses.

Garoppolo’s mission for 2021 was clear: shrug off an injury curtailed 2020 and restore the Niners as a playoff contender while giving Lance chance to develop. The added benefit of that scenario would be Garoppolo increasing his trade value and helping the Niners recoup some assets given the significant amount they parted with to land their quarterback of the future.

However, to this point, Garoppolo has not adhered to that brief.

Garoppolo ranks an impressive fifth in Expected Points Added per play among quarterbacks, according to Ben Baldwin of The Athletic. However, those numbers are partially a reflection of the quarterback-friendly nature of Kyle Shanahan’s offense along with Garoppolo’s experience in running it.

While he can operate the offense efficiently, Garoppolo has not brought much in the way of upside in his four games so far this season.

His completion percentage over expected is minus 1.4, per the NFL’s NextGen Stats, with Garoppolo completing on 66.1 percent of his passes when expected to connect on 67.5.

Garoppolo is not enjoying a strong season in terms of accuracy, and he is continuing to serve as a very conservative quarterback who struggles to push the ball downfield consistently. His intended air yards per attempt average of 6.7 is the third lowest in the NFL, per NextGen Stats.

For Shanahan and the Niners to make a convincing case for Garoppolo remaining as the starter, there must be an imminent upturn in his performances and their results. The Colts, who rank 29th in Football Outsiders pass defense DVOA, perhaps provide the ideal opponent for him to get back on track, though a forecast of heavy rain may limit his opportunities to take advantage of Indianapolis’ weakness in that area.

Should he again fail to impress and the Niners suffer another dent to their playoff aspirations by falling to 2-4, it will be tougher to make the argument for Garoppolo staying ahead of Lance on the depth chart and taking reps away from the rookie that would benefit his development.

The further the 49ers fall behind in the playoff picture, the more the 2021 season needs to become about preparing Lance for a full season as a starter in 2022.

In that sense, a favorable matchup at home against a 2-4 Colts team should represent the last-chance saloon for Garoppolo.

It is one he looks set to face without his starting left tackle, as Trent Williams is doubtful with an ankle injury, but that is unlikely to be accepted as an excuse should the Niners fall short against a Colts team they are favored to beat.

Garoppolo is at the stage of his 49ers career where he is out of excuses. He has performed efficiently but not at a particularly high level and has already missed a game due to injury. The 2021 season has to this point served as a frustratingly familiar tale for San Francisco’s starter and Garoppolo’s time in that role could soon come to an end if he fails to write a positive chapter in Week 7.