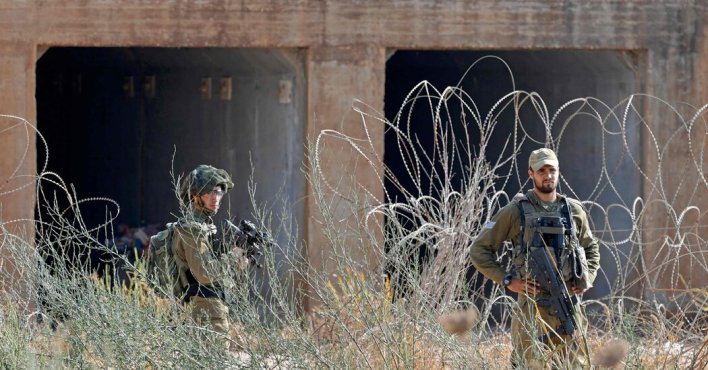 JERUSALEM — Israel on Sunday captured the last of the six Palestinian inmates who escaped a maximum-security prison nearly two weeks ago, ending an episode that Israelis saw as a humiliation of their security establishment and Palestinians celebrated as a rare black eye for the Israeli occupation.

The Israeli Army said in a statement that it had captured Munadil Nafayat and Eham Kamamji in Jenin, their hometown in the occupied West Bank, in an early-morning operation conducted jointly with a police special forces unit and the Israeli domestic intelligence agency, the Shin Bet.

Of the six prisoners who broke out of Gilboa prison in northern Israel on Sept. 6, Mr. Nafayat and Mr. Kamamji were the only ones who had managed to reach the West Bank. The other four were caught in northern Israel more than a week ago.

The six escaped their shared cell after removing part of the floor of their shower cubicle and crawling for nearly 32 yards underneath the prison, partly through a pre-existing cavity that extended from beneath the cell toward the prison perimeter.

The escape, Israel’s biggest jailbreak in more than 20 years, set off an uproar. The relative ease with which several men convicted of terror offenses had burrowed to freedom was considered a damning indictment of the prison system, its security procedures and its intelligence-gathering capabilities.

But for many Palestinians, who see the fugitives as resistance fighters against a 54-year occupation, the jailbreak was a morale-boosting act of heroism. Palestinian social media users circulated doctored images of the fugitives’ arrests, turning their grimaces into smiles to portray them as triumphant even at the moment of their capture.

In a statement, the Israeli prime minister, Naftali Bennett, hailed the security forces for “an impressive, sophisticated and rapid operation.” He added: “What went wrong can be repaired.”

Mr. Nafayat and Mr. Kamamji were arrested unarmed at a safe house after coming out with their hands in the air, according to a report by Kan, the main state-funded Israeli news broadcaster. Mr. Kamamji’s father, Fuad, told Kan that his son had called him unexpectedly at around 2 a.m., saying that his arrest was imminent and that he was about to give himself up.

Five of the six fugitives, including Mr. Kamamji and Mr. Nafayat, were members of Palestinian Islamic Jihad, an extremist Islamist group that has carried out scores of attacks on Israeli civilians since 1980s, killing hundreds. It regularly joins Hamas, the larger militant group that holds sway in the Gaza Strip, in firing unguided rockets at Israeli towns and cities, a war crime under international law.

Mr. Kamamji was serving a life sentence for kidnapping and killing an Israeli teenager, Eliyahu Asheri, while Mr. Nafayat had been jailed without charge since 2019.

The most famous of the six, Zakaria Zubeidi, became well known during the second Palestinian intifada, or uprising, in the 2000s, when he was a senior commander in the Aqsa Martyrs Brigades, a militant group loosely affiliated with Fatah, the secular group that dominates Palestinian politics in the occupied West Bank.

He was one of nearly 200 militants granted an amnesty by Israel in 2007, and he later turned to political theater, which he said was a more effective means of resistance than violence.

But in 2019, Mr. Zubeidi was rearrested by Israel. He is currently on trial, charged with involvement in the shooting of Israeli settlers in the West Bank, among other charges.

About 5,000 Palestinians are incarcerated in Israeli prisons. To many Palestinians, their fate is synonymous with the daily experience of the occupation; many know someone who either is a prisoner of the Israeli security forces or has been one.

Israeli news coverage of the jailbreak has centered on the security dangers posed by the fugitives, the blunders that may have led to their flight and speculation about the influence that some prisoners might have with the prison authorities. Analysts asked why the six men — all from the Jenin region, about 10 miles south of the prison — had been incarcerated so close to their hometowns and whether that proximity might have allowed for support networks that enabled their escape.

Other perceived errors included the decision to house the six men in the same cell, even though three of them had been formally designated as likely to try to escape; the posting of a floor plan of the prison on the website of an architectural firm; and prison officials’ failure to use a jamming device that would have kept inmates from communicating with the outside world on mobile phones smuggled into the jail.

Omer Bar Lev, the government minister who oversees the prison service, acknowledged that lapses had occurred and said there would be an independent inquiry into what had gone wrong.

Covid: New WHO group may be last chance to find virus origins

Covid: New WHO group may be last chance to find virus origins

Biden Cancelled $1.5 Billion Of Student Debt For Borrowers, But You Can Still Apply Now

Cases Grow in Germany as Restrictions Set to Expire