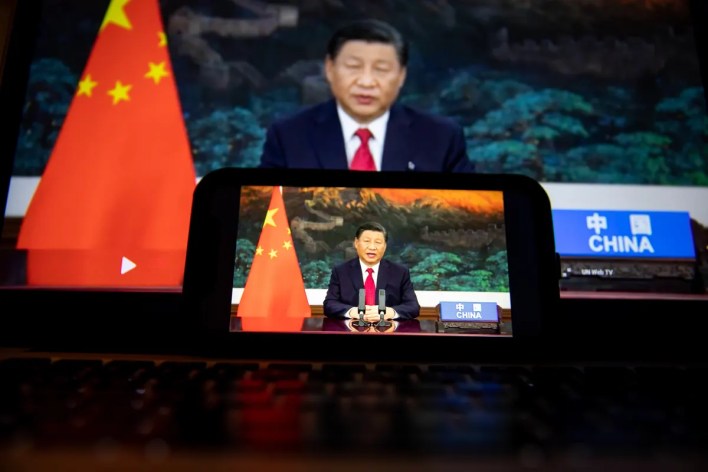 Observers have welcomed Chinese President Xi Jinping’s announcement that the world’s largest nation will stop funding overseas coal power projects, marking a significant milestone in the decline of the most emissions-intensive fossil fuel.

In a prerecorded announcement to the United Nations General Assembly in New York, Xi pledged: “China will step up support for other developing countries in developing green and low-carbon energy, and will not build new coal-fired power projects abroad.”

By any standards, the announcement is a big deal. As of this year, Chinese money made up 56% of public funding for coal power projects around the world, according to the Institute for Energy Economics and Financial Analysis. European think tank E3G has indicated the pledge could result in the cancellation of some 40 Gigawatts of coal projects under development in 20 countries. Yet other observers noted that that may be a drop in the bucket when it comes to total overseas coal investments from wealthy nations.

Responding to the news, U.K. politician Alok Sharma, president-designate of this year’s COP26 climate summit in Glasgow, tweeted: “It is clear the writing is on the wall for coal power. I welcome President Xi’s commitment to stop building new coal projects abroad—a key topic of my discussions during my visit to China. At #COP26, we must consign coal to history.”

Manish Bapna, CEO of the U.S. Natural Resources Defense Council, said: “This is a major step forward on the long global march to a healthier, safer and more prosperous world. By canceling plans to build dozens of coal-fired power plants in 20 countries, China is making a strong move toward a cleaner future overseas. This opens the door to bolder climate ambition from China and other key countries, at home and abroad, ahead of the global climate talks in Glasgow.”

Nevertheless, many details about Xi’s pledge remain unclear. Hongqiao Liu at Carbon Brief noted: “we will have to wait for the ‘official interpretation’ from [China state broadcaster] Xinhua News to really understand what Xi Jinping has pledged.” Li Shuo, senior climate and energy policy officer at Greenpeace China, said: “Many questions can be asked about the announcement, including whether it will be implemented immediately, does it include only financing or also construction, does it apply to state actors only, will it lead to a similar moratorium on fossil fuels? These are all good Qs and there are more.”

“China deserves great praise for pledging to stop building coal plants overseas—the first developing country to make such a pledge and the last of the major public financiers of overseas coal to do so,” Gallagher said. “Now that the world’s major governments have led by example and banned overseas coal plants, it is time for the private sector—which finances 87% of overseas coal—to follow suit.”

A policy brief by researcher Xinyue Ma of the Boston University Global Development Policy Center covers this in more detail.

MORE FROM FORBESFlight-Free Climate Conference Warns: ‘We Are Not Acting Like This Is An Emergency’By David Vetter

On the other hand, observers noted that domestically, China is still by far the world’s largest single coal consumer and emissions generator. A report last month from U.K. analysts Ember revealed that the Middle Kingdom now burns some 53% of the global supply of coal. E3G says that 55% of the coal power projects in development are in China, and that the country has 163 Gigawatts of coal-fired electricity generation in the pipeline—equivalent to the entire power consumption of some small nations.

For this reason, some climate researchers were less enthused by Xi’s announcement. Mark Campanale, founder of the Carbon Tracker Initiative, Tweeted that China “could go further & cancel its domestic plans to build 163GW of new coal power. By 2024, Carbon Tracker’s analysis finds renewables will already out compete coal right across China.”

“This is a really big deal,” wrote Zeke Hausfather, director of climate and energy at the Breakthrough Institute research center. “At the same time, it is imperative that China stop financing new domestic coal plants. Otherwise it comes off as more than a little hypocritical to ban financing of coal plants in poor countries abroad while continuing to build them at home.”

The announcement marks the second year in a row that Xi has used the gathering of the UN General Assembly to deliver a major climate pledge. Last year the Chinese leader announced that China would reconfigure its economy to get to carbon neutral by 2060, and reach peak carbon emissions by 2030.