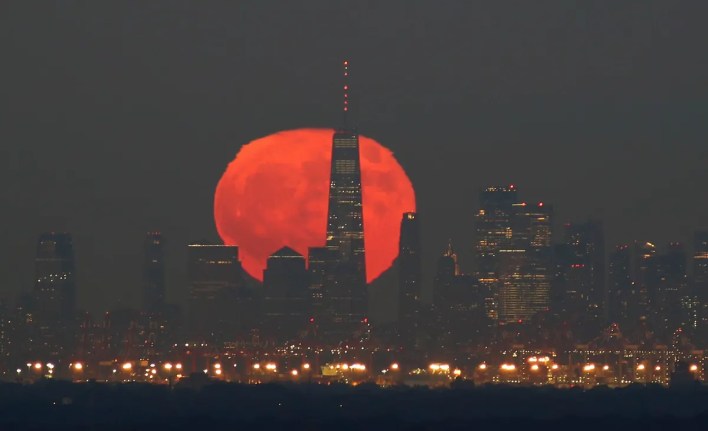 Will you see the full “Hunter’s Moon?”

Also called the “Sanguine Moon” and even the “Blood Moon,” October’s full Moon is this year the first one of fall/autumn in the northern hemisphere.

Despite being known for big and bright, by far the best time to watch the any full Moon—including the “Hunter’s Moon”—will be as it appears on the horizon to see it shine in muted autumnal hues of orange and pale yellow. But do you know which horizon? Or what day to look at the full Moon?

Here’s everything you need about when, where and how to see the “Hunter’s Moon” at its biggest, brightest and best—with just your own naked eyes:

When is the ‘Hunter’s Moon?’

The next full moon will occur on Wednesday, October 20 at 14:58 Universal Time, but the moon will appear full the night before and after its peak to the casual stargazer.

The Moon always looks at its delicate best during moonrise and moonset close to the time of it being at its “full” phase. However, you can look at the Moon any day this week and it will look big and bright—and be “up” most of the night.

Here are the best times to see October’s full “Hunter’s Moon” from a few key cities, but do check the exact times of moonrise and moonset for your location.

Just after sunset on Wednesday, October 20 2021

Wednesday offers the best opportunity to see the full “Hunter’s Moon” rise into a twilight sky.

Thursday offers another good opportunity to see the full “Hunter’s Moon” rise into a twilight sky.

Where to see the ‘Hunter’s Moon’

Get yourself to an observing location that has a clear unobstructed view low to the eastern horizon.

Don’t bother traveling to dark skies for this one. Since the full Moon is the biggest light-polluter there is, the darkness of the sky is irrelevant. Besides, it occurs during early twilight, when there’s plenty of light left in the evening sky.

How to see the ‘Hunter’s Moon’

The first full Moon event of the Northern Hemisphere’s fall or autumn season, the “Hunter’s Moon” will rise in the east just after sunset, shine brightly all night and then set in the west close to sunrise.

You don’t need anything except good timing and your own naked eyes to enjoy a full moonrise, though if you do have a a pair of binoculars do have them ready for a stunning close-up.

When is the next full Moon?

The remaining full Moons of the years are:

When is the next New Moon?

The next New Moon is on November 4, 2021. It’s actually going to be a “Super New Moon” because the Moon will be at its closest to the Earth in its egg-shaped monthly orbit.

That won’t be visible—New Moons are precisely between the Sun and the Earth so are invisible—but it does mean high tides in the days after the event.

If there’s one remaining full Moon in 2021 that sticks out, it’s November’s “Beaver Moon.”

While the Moon is full it will be mostly swallowed by Earth’s mighty shadow in space. Visible from North and South America, northern Europe, east Asia, Australia and the Pacific, observers will see 97% of the Moon turn a reddish color over about three and a half hours. That’s sure to be a strange sight.