Lewis Hamilton: “It’s not a case of ignoring the pressure as it’s there but understanding what will be, will be”; watch the Turkish Grand Prix on Sky Sports F1 and Sky Sports Main Event from 11.30am on Sunday; race starts at 1pm

By Ben Grounds and Ron Walker

Lewis Hamilton has shrugged off the intensity of his world title fight with Max Verstappen as the pair prepare to renew their battle at this weekend’s Turkish GP, live on Sky Sports.

Istanbul is expected to be wet and is only the second time since 2011 it has been included in the calendar after the sport returned to the circuit last year amid the coronavirus pandemic.

Hamilton won the 2020 race to clinch his seventh world title and will be aiming to shine again this weekend in his bid to move another step towards a record-breaking eighth.

With just two points separating him and Verstappen, the title race is going right down to the wire, but Hamilton is leaning on all his experience ahead of a gruelling denouement to an engrossing season.

“I generally find it relatively easy as I have other outlets and I’m able to blow off steam in lots of different ways,” said Hamilton, who attended Paris Fashion Week since winning his 100th F1 Grand Prix in Sochi a fortnight ago.

“The most important thing is always to come back into the racing environment fresh, recovered and positive. I don’t really have any worries. 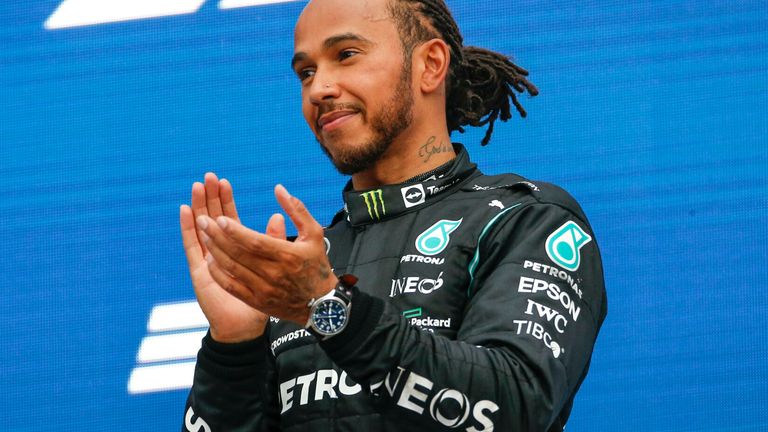 I’ve been doing this for a long time so I’ve found ways to get me on course and I know what can also put me off course. I know what makes me tick and I’ll to stick to them.

“I’m able to just arrive here and love doing my job. We’re just taking things one week and one race at a time. We’re always trying to elevate, and I’ve spent plenty of time speaking to the team about how we can advance and improve.

“I’ve been doing this for a long time so I’ve found ways to get me on course and I know what can also put me off course. I know what makes me tick and I will to stick to them.”

Although Hamilton won in Sochi to clinch a record-extending 100th F1 win, Verstappen limited the damage by finishing a surprise second as the rain came thundering down and chaos ensued with just a few laps left.

Both are hoping the Istanbul track is much more reliable than it was last year, when it had just been re-laid to host an F1 race for the first time since 2011 and was far too slippery.

Verstappen said it was like an ice rink and placed sixth in the race after qualifying in second spot.

Hamilton profited from the unpredictability of the race to rise from sixth on the grid to win and clinch a record-equalling seventh world title, and he is taking the pressure of a closer championship battle this time around in his stride. 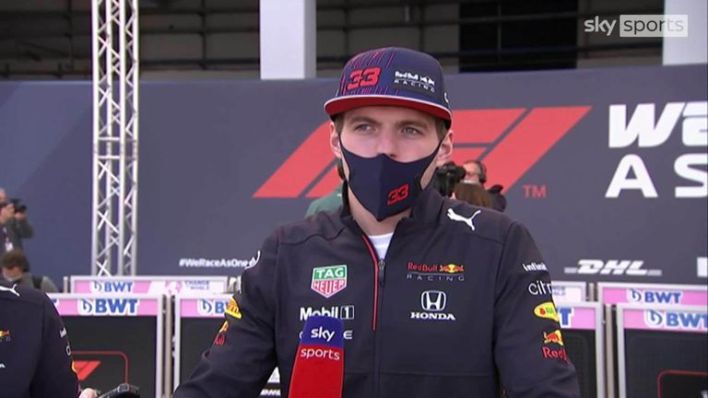 “It’s not a case of ignoring it as it’s there,” added Hamilton. “It’s a case of understanding what will be, will be.

“All you can do is prepare the best way you can and give 100 per cent so I don’t worry about these things.

“I’ve had lots of ups and downs in the past, but I’ve had an amazing time with a lot of growth. I just prepare for now which means doing the work with the guys back in the factory.

“Then, ultimately it’s a case of going out and enjoying. It’s been a very engaging season with two teams neck-and-neck which is amazing. Of course, you want to win but you’ve got to learn to not let that overtake everything in your life.”

Verstappen took a penalty two weeks ago in Russia when he took a fourth engine, but recovered to finish second in the race and limit Hamilton’s championship advantage to just two points.

Hamilton, who wore a kilt during Thursday’s media call, is pleased to be back in Turkey – the country in which he clinched his record-equalling seventh world championship in a wet race last year.

The Mercedes driver was five seconds off in qualifying back then. If similar conditions were to arrive this weekend, Hamilton is confident his car will be more competitive.

“I think we’ve understood some of the conditions we had that weekend. I feel we rectified some of that in the race. We’re better prepared and I think the track has potentially shifted a little bit. We might be faced with slightly different challenges this weekend.”

Hamilton appeared to contradict an earlier admission from Mercedes that their lead driver was considering taking an engine penalty in Turkey to avoid reliability issues in his ongoing title challenge with Max Verstappen.

The World Championship leader has already used all three of his permitted engines and would incur a grid penalty should he use a fourth, as seems highly likely, and as Verstappen did ahead of the last race in Russia.

But that replacement looks unlikely to happen in Istanbul, with Hamilton confident of avoiding having to start from the back of the grid this weekend.

“At the moment, I still have number two and three,” he told reporters. “I don’t envisage us taking one at the moment, but that could change.”

Verstappen would be set to benefit from any penalty incurred by his main rival in the World Championship fight, but told Sky Sports it would not serve as a distraction from his own determination to win on Sunday.

He said: “At the end of the day, I can’t control what they’re doing, so it’s more important to focus on ourselves and then try to get the best out of that and try to score as many points as possible every single weekend. And, of course, I will try to do that again.” Mercedes registered their worst qualifying result of the turbo-hybrid era – sixth and ninth – as they struggled to deal with the low-grip track before Hamilton pulled off a remarkable recovery to clinch the race victory and his latest championship win in the process.

He would later label the experience an “ice race” during which numerous drivers spun off the track and pole-sitter Lance Stroll ended dropping down to ninth, finishing over a minute after the Mercedes driver.

The race was also the only weekend of the season where Verstappen neither withdrew nor finished on the podium. Ahead of his return to the circuit, the Red Bull driver said: “Especially here in Turkey it’s a bit of a question mark. Last year was not really representative, there was a very low grip level so hopefully they solve that for this year.

“Then, I guess we have to find out on Friday how competitive we’re going to be.”

At the end of the 2020 season Hamilton labelled his drive in Turkey as the best of the campaign and was similarly positive when reflecting on his performance ahead of this weekend.

“I have a really bad memory but it was crazy, as I feel like we were just here,” he said.

“It’s crazy how time flies and it’s nice to be back. I love coming out to Turkey, It was of course an incredible moment and what a difficult race. It was a challenging weekend as a team, so to come out on top with no real mistakes in the race, it was an emotional time.” 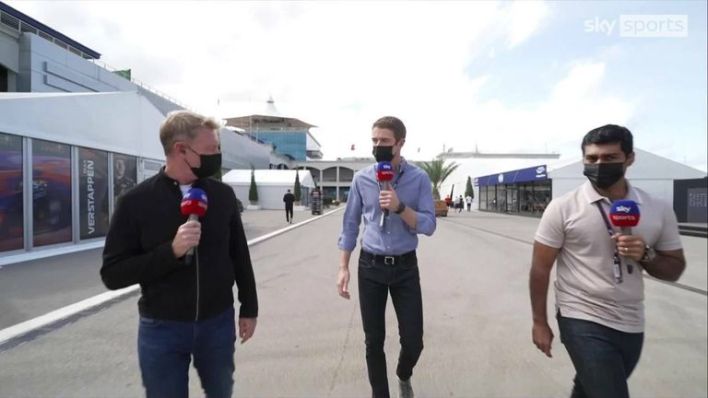 “This was the place where Lewis clinched his record-equalling seventh world championship in a wet race. We’re expecting rain more likely Saturday than Sunday so it’ll be interesting to see how that affects his prospects.

“There’s every chance of Hamilton starting from the back this weekend because he needs to take an extra engine – that’s the reality between now and the end of the season.

“That would exceed his quota and gain him a penalty. It’s what Max Verstappen had to go through in the last race in Russia.

“These are significant times for Lewis. His 100th win last weekend, and if he wins here this weekend, he would equal the nation of Brazil in terms of F1 race victories.

“When you think that includes his idol Ayrton Senna, Nelson Piquet – a three-times world champion – and Emerson Fittipaldi, it shows you that Hamilton is a class apart along with Michael Schumacher on 91 wins.

“He’s a genuine history-maker, and he is making history week in, week out and year on year.”

Could Hamilton have really joined Ferrari? 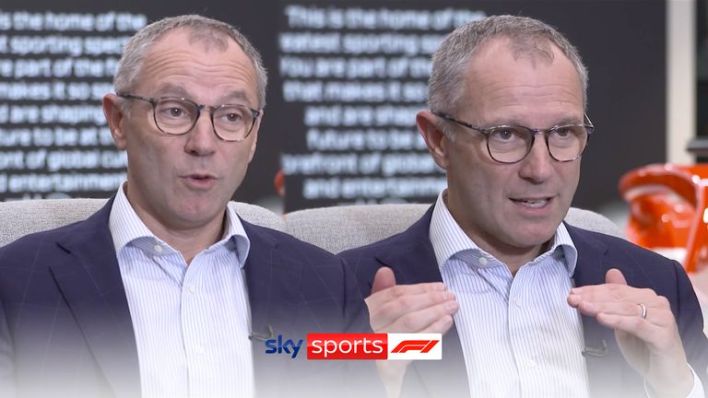 Earlier this week, former Ferrari boss Stefano Domenicali claimed Hamilton not joining the Italian team during his Formula One career would be remembered as a “sliding doors” moment for the sport.

The seven-time world champion revealed in an interview with Sky Italia shortly after winning his 100th race in Sochi that it had always been his “dream” to drive for Ferrari.

Domenicali discussed signing Hamilton while in charge of Ferrari from 2008 to 2014 but Hamilton responded to this story, downplaying whether he still thinks back to how close he came to making the switch.

“Not really,” said Hamilton, who extended his stay with Mercedes until 2023 at the start of the season and looks set to finish his career with the German team.

“I have no reason to think about it. Each year or each end of a term, you have to do your due diligence and see what options you have but I’m really proud of where I am and what we’ve achieved with Mercedes.

“The idea of going to Ferrari was very short-lived. When you’re with Mercedes, you’re with them for life. It’s not something you see with any other team or any other brand.

“It’s something I’m very proud of. We’ve achieved more than anybody and that’s down to great loyalty and teamwork. I don’t take that for granted.”

Lewis Hamilton and Max Verstappen’s gripping championship battle continues at this weekend’s Turkish GP, and you can watch it all live on Sky Sports F1.

The title protagonists – following an epic Russian GP where Hamilton took his 100th F1 win but Verstappen recovered from 20th to second – are split by just two points heading to Istanbul Park, where more drama is in store.

The key times for this weekend are:

Sky F1’s coverage begins on Thursday with the live F1 Show from the paddock, dissecting all the news from media day, while it will be boosted by the return of Jenson Button this weekend.