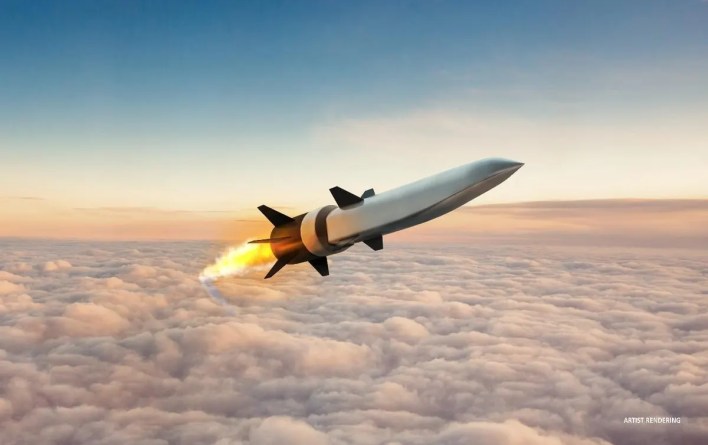 The prototype missile for the HAWC (or Hypersonic Air-breathing Weapon Concept) program was released from an unspecified aircraft—very likely a B-52H bomber cruising below the speed of sound—and ignited a rocket engine that boosted it to supersonic speeds.

That velocity enabled the missile to ditch its rocket boosters and switch to a scramjet, a type of jet engine that only works when already flying extremely fast. A scramjet omits a compressor and instead uses the collision of onrushing air molecules to combust fuel, allowing for efficient sustained cruising at extreme speeds exceeding one mile per second (Mach 5) or faster.

The scramjet on of Northrop’s HAWC prototype reportedly weighs half that of prior hypersonic demonstrators thanks to the use of 3D-printing technologies. Furthermore, prior statements by Northrop suggests its design is a “waverider” capable of skipping on tops its own supersonic shockwaves for greater lift, a technique harnessed on Boeing’s X-51 hypersonic demonstrator.

The DARPA press release describes key parameters tested were success in launching from an airplane, ignition of the rockets, separation of the spent rocket boosters, and successful cruising at high speeds—but not successful impact on a target. That’s surely in part because the HAWC program is focused on solving the riddle of practical air-breathing hypersonic propulsion rather than producing a completed missile.

Why air-breathing hypersonic propulsion is a big deal

In the current arms race for hypersonic weapons, China and Russia have already deployed several types of hypersonic missiles and the U.S. is testing several. So the significance of testing a specifically ‘air-breathing hypersonic weapon’ may not be readily apparent.

In fact, it represents a much more advanced and militarily compelling capability than that offered by most existing hypersonic weapons.

Here’s why: nearly all the more mature weapons are so-called boost-glide weapons that rocket up into space and release hypersonic glide vehicles (HGVs) that skip just above the atmosphere. While more maneuverable and shallower in trajectory than a ballistic missiles, making them more challenging to detect and intercept, HGVs are actually not intrinsically faster than old-school ballistic missiles, and lose considerable speed while skipping and gliding.

But the air-breathing HAWC prototype tested Monday sustainably cruised at hypersonic speeds (Mach 5+) while remaining within the atmosphere. And that’s quite a feat, because the friction from on-rushing air molecules not only induces drag but also a massive case of rugburn, heating up the vehicle’s surfaces to dangerous levels. Thus air-breathing hypersonic technology is a trial not only of speed but of the missile’s heat endurance.

Air-breathing hypersonic cruise missiles could offer faster time on target than a high-arcing ballistic missile with the same peak velocity, but also greater maneuverability which could be used to navigate around enemy air defense radars and batteries.

Furthermore, their much lower altitude means they will be better masked from radars by the curvature of the Earth. Combined with their small radar cross-section, that means hypersonic cruise missiles may only be detected at shorter distances, leaving air defenses very little time to detect, track and engage a threat incoming at more than a mile per second.

Such expensive weapons might be most useful for attacking targets benefiting from especially heavy air defenses, such as warships and strategic military bases, as well as promptly striking fleeting targets of opportunity such as enemy ballistic missile trucks, and (again) ships.

As the DARPA press release indicates, hypersonic weapons may achieve such high velocities they may not need to carry explosive payloads against certain point targets, at least if they are precise enough to reliably achieve a direct hit. The option of launching without the warhead could in turn be leveraged to considerably boost range.

Northrop vs. Lockheed in Hypersonic Race

Northrop/Raytheon only publicly tossed their hat in the HAWC program’s ring in June 2019, apparently having secretly begun work years earlier. But a rival team from Lockheed-Martin and Aerojet Rocketdyne has been openly associated with the HAWC program for longer.

Both team’s designs were successfully test-carried (or “captive carried”)  by airborne aircraft in September 2020, but not actually launched. But then in December 2020 Lockheed’s first attempted launch test of its HAWC design failed to release from a B-52, allegedly due to “dumb mistakes” and “basic errors” rather than fundamental design flaws. Be that as it may, a subsequent test of Lockheed’s HAWC has not been reported.

Northrop-Grumman entered the HAWC program with an important edge because of its 2018 merger with weapons manufacturer Orbital ATK. Prior to that, Orbital had acquired the company which developed and built three unmanned X-43A hypersonic test vehicles. Tested in 2001 and 2004 by NASA, one of the X-43As achieved Mach 9.6 speeds after being launched from a B-52 bomber, making it the fastest jet-powered aircraft.

From Concept to Capability

DARPA is concerned with developing advanced technologies well ahead of what’s immediately  practicable, and thus the HAWC program incepted in 2014 doesn’t seek to create a viable weapon, but rather to refine the pre-requisite propulsion and airframe technologies . That leaves important characteristics such as guidance capabilities un-elaborated.

The future operational capability will instead be developed in at least three air-breathing hypersonic programs more recently launched by the Air Force.

The Hypersonic Attack Cruise Missile, which has already been allocated $190 million in funding in the draft 2022 budget, appears to be a more straightforward operationalized successor to HAWC that could be carried operationally both by bombers like the B-52 and B-1 Lancer, and fighters like the F-35 or F-15. Reportedly, the HACM might exceed the range of the Air Force’s AGM-183A hypersonic glide vehicle which is close to entering service.

It may correspond to a pre-solicitation posted August 2020 for proposals for a “solid-rocket boosted, air-breathing, hypersonic conventional cruise missile, air-launched from existing fighter/bomber aircraft.”

There’s also the SCIFiRE program seeking to develop an air-breathing hypersonic weapon jointly between the U.S. Air Force and Navy and the Royal Australian Air Force, with a flying prototype due in two years and production missiles to follow in 10 years. The Air Force has already granted Boeing, Lockheed and Raytheon contracts collectively worth $94.8 million to develop design concepts due for review in August-September 2022.

The resulting weapon could be mounted on Boeing Super Hornet/Growler fighters, F-35 stealth jets and even P-8A Poseidon maritime patrol planes based on the Boeing 737 airliner, all types operated by both the U.S. and Australian militaries. The program’s potential seems even greater considering the recent AUKUS pact, which besides the controversial nuclear-powered submarine deal, includes transfer of cruise missile technology to Australia.

Finally, there another program called Project Mayhem for a larger but still expendable multi-role hypersonic vehicle capable of carrying both weapons and reconnaissance systems in internal bays.

A final possibility is that if successful, air-breathing hypersonics derived from HAWC could end up displacing funding or procurement for more mature boost-glide type weapons of overall lesser capability. The Air Force’s most mature hypersonic weapons program, the AGM-183A ARRW boost-glide weapon, has failed twice in recent tests.

Rivian Files For IPO With Initial Orders For About 150,000 Electric Trucks

Rivian Files For IPO With Initial Orders For About 150,000 Electric Trucks