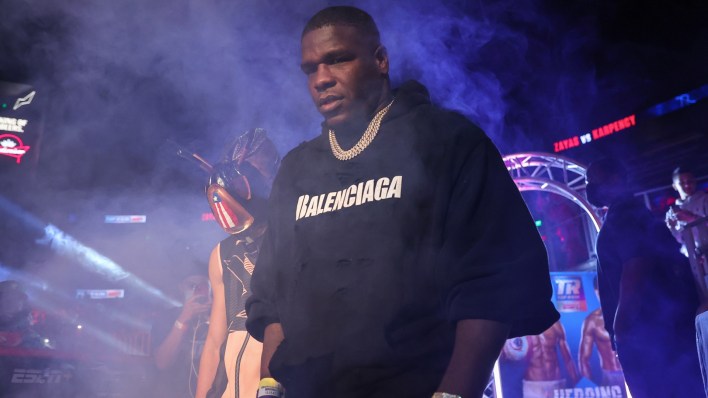 Former three-time NBA All-Star Deron Williams is set to fight on the undercard of Dec. 18’s fight between Jake Paul and Tommy Fury.

And another former professional sports star, Frank Gore, could be his opponent.

Gore, who was named a five-time Pro Bowl selection during his 16-year NFL career, might be set to face Williams, according to The Athletic’s Shams Charania. Gore reportedly turned down NFL offers to train for boxing, and his eyes have been fully set on the sport since at least August.

“I just fell in love with how hard it is,” Gore said. “I felt like, ‘Man, I couldn’t fight.’ And I always like a challenge. So I kept doing it and doing it and I saw myself getting better and better.”

Gore is not the first former football star to throw his hands in the ring. Six-time Pro Bowl receiver Chad Johnson faced MMA fighter Brian Maxwell in June, going the distance in a four-round bout.

Gore hired noted fight agent Malki Kawa, who is also a football agent, and reportedly had a “high-profile” fight in the works dating back to September.

“I’ve been training for both — football and boxing,” Gore told NFL.com. “I’ve always loved boxing, so that’s what I’ve been doing. And we’re trying to make a fight happen. If we do that, you’ll see me in the ring.”

Williams might not be a pushover opponent for Gore, who has been known for bulldozing his foes as an NFL back. UFC fighter Ryan Spann said Williams “whooped my a—” in a previous sparring match, and Williams reportedly pitched a bout against former NFL star-turned UFC fighter Greg Hardy.

But according to a report from WSVN in early October, Gore trains two hours a day, six days a week, and has used boxing as an offseason workout since he was drafted.

Boxing trainer Javiel Centeno said that Gore is “the type of guy that gets hit and keeps coming.”

“It’s like he feeds off that,” Centeno said, according to WSVN. “Now we’re working on not getting hit, because he’s gonna get hit by guys, you know, 200-plus pounds, so we wanna make sure he’s not getting it.”

Gore and Williams would be the most recent pair of professional athletes-turned-boxers. Former three-time NBA Dunk Contest champion Nate Robinson made his debut in the ring in November 2020 but was knocked out in a bout against Paul.

Gore last played in the NFL during the 2020 season, recording 653 rushing yards and two touchdowns for the Jets in 15 games played. Gore has totaled exactly 16,000 rushing yards during his career — the third-most of all time — and 81 rushing touchdowns, which is tied for 19th all time.

MORE: Canelo Alvarez vs. Caleb Plant purse, salaries: How much money will they make in 2021 fight?