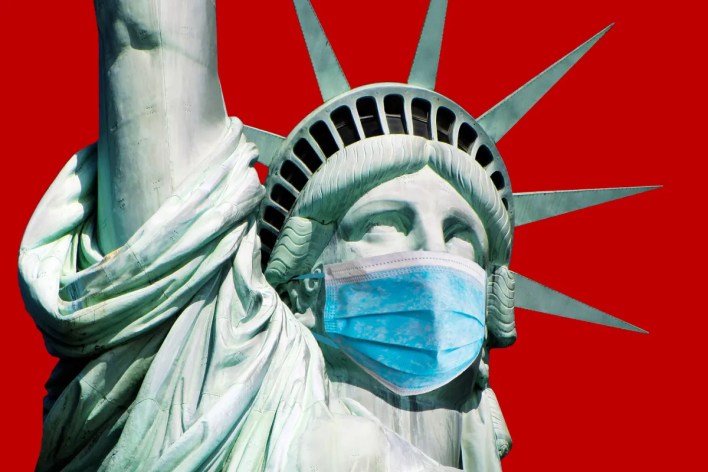 As the Delta variant wave of Covid-19 begins to recede in the U.S., experts are proclaiming the worst is behind us. Well, maybe. Let’s hope. But, the experts have been wrong before, many times, as have our political leaders. It’s time we reassess messaging. Caution and humility are warranted.

From the outset of the pandemic, well-respected experts have consistently gotten predictions wrong.

Remember when Swedish public health officials told us herd immunity was within reach, and that it would in fact be achieved by May of 2020.

Perhaps most famously, citing an influential model by developed by the Institute for Health Metrics and Evaluation at the University of Washington, the Trump White House declared in April 2020 that “Covid-19 deaths would come to a halt by the summer.” The Chair of the Coronavirus Task Force, Vice President Pence went even further by predicting on April 24th of 2020 that the U.S. would “have this coronavirus epidemic behind us” by Memorial Day weekend.

Then in late May of 2020, former Food and Drug Administration (FDA) Commissioner, Scott Gottlieb, said “We can all take a breather in the summer [of 2020].” While warning at the time that we were still in the “early innings of the epidemic” he expected cases to go down in the summer and that the U.S. would have a respite from coronavirus. Little did he or others know that the so-called Sun Belt wave of coronavirus would begin to emerge in June, impacting a wide swath of the South and Southwest of the U.S.

Fast forward to June of this year and once again most of the experts got it terribly wrong. They banked on vaccinations forming a formidable line of defense against the incoming Delta wave.

In June, Monica Gandhi, an expert in infectious diseases, declared that the U.S. was close if not already at herd immunity with the combination of vaccinations plus natural immunity from previous infections.

That supposed wall of immunity defense proved to be a Maginot Line of sorts, as the virus sought out the weakest link: The many unvaccinated folks in America.

Perhaps this should have been foreseen. The U.S. vaccination campaign’s early success petered out in the spring of this year. Peer nations – measured in terms of a comparable Gross Domestic Product per capita – caught up and blasted past the U.S. this summer. At the same time, the U.S. wasn’t as effective in the targeting of its vaccination campaign at the elderly and other at-risk groups, which left a significant number of vulnerable people susceptible. For example, currently about 82% of people over 65 are fully vaccinated in the U.S. By contrast, in most wealthy, industrialized nations, more than 96% of those above the age of 65 are fully vaccinated.

Given the disparity in overall rate and targeting of vaccinations, once the Delta wave hit, it was inevitable that the U.S. would be impacted worse than any of its peers.

The “quiet summer” that was predicted by many turned out to be a nightmare.

Candidly, some scientists admitted that we were caught off guard by the Delta variant. A keen scientist observer, Eric Topol, noted that the devastating rise in hospitalizations and deaths over the summer was not supposed to happen, given that we had an oversupply of an effective weapon to prevent severe Covid-19 disease; vaccines. In a tweet Topol stated “no one predicted this ability of Delta to override vaccinations.”

A review of predictions by 140 U.K. experts – epidemiologists and statisticians – showed they substantially underestimated the extent of the pandemic. This suggests that experts ought to consider expanding the range of scenarios they consider plausible.

Yet here we are, in early October, as the Delta wave appears to be retreating, and once more experts are lining up to declare the pandemic’s demise. Notably, in recent days Gottlieb has repeatedly stated that the summer spike in cases fueled by the Delta variant is “likely the last big Covid-19 wave in the U.S.”

Gottlieb could very well be right. After all, there must be a whole lot more immunity at this point in time. But, one wonders, why say it now? What purpose does it serve? So many missteps throughout this pandemic can be traced to poor public health messaging, whether intentional or not, and whether by experts or public officials.

In early July of this year, President Biden downplayed the gravity of the impending situation and inexplicably declared that the “virus is on the run.” The comment was disconnected from reality. Globally, in early July the Covid-19 situation was already worsening across many regions, which should have raised the question among experts how could the U.S. escape this trend.

Maybe Biden’s statement was done to reassure a public desperate for good news and normalcy. For Biden, demonstrating the success of the vaccination campaign by prematurely declaring on July 4th that we are “independent from the coronavirus” may have therefore been politically motivated. If so, it was an unforced error with negative consequences, something we’ve seen play itself out so many times since March of 2020.

In The Great Influenza author John Barry wrote about one of the worst pandemics in human history, the misnamed “Spanish Flu” of 1918-1920. In the book, published in 2004, Barry presciently offered his thoughts on lessons to be drawn for future pandemics:

“As horrific as the disease was during the 1918-1920 pandemic some public officials made things worse by minimizing it, by trying to reassure. … If there is a single dominant lesson from 1918, it’s that governments need to tell the truth in a crisis.”

Public health messaging has certainly improved under the Biden Administration, in part because the President has refrained from taking to the podium to upstage the scientists. Yet, inconsistent, and at times inaccurate, or simply mixed messaging, persists.

Consider that since the spring of this year the Centers for Disease Control and Prevention (CDC) has struggled with providing consistent and clear messaging on what vaccinated people should and should not do regarding travel and mask wearing.

In May, the CDC published guidance that vaccinated people do not need to wear masks in practically any setting. In June, Director of the CDC, Rochelle Walensky, even asserted that fully vaccinated people are “safe from the Delta variant.”

Yet, data from the U.K., Israel, and Singapore, had already shown diminished vaccine efficacy, especially with respect to breakthrough infections. In July, the CDC reversed course on masks, ostensibly based on an outbreak in Provincetown, Massachusetts.

And, on boosters the mixed messages coming out of the White House, CDC, and FDA are mind-boggling. It’s a never-ending cascade of inconsistent recommendations on who should get a booster shot and when. All of this leaves the general public scratching its head. People want clear guidance. They’re not getting it from their leaders and top public health officials.

In brief, the messaging on predictions of the Covid-19 trajectory as well as public health recommendations has been a mess. It’s time we revisit what and how we message. Vigilance and a slice of humble pie are warranted.