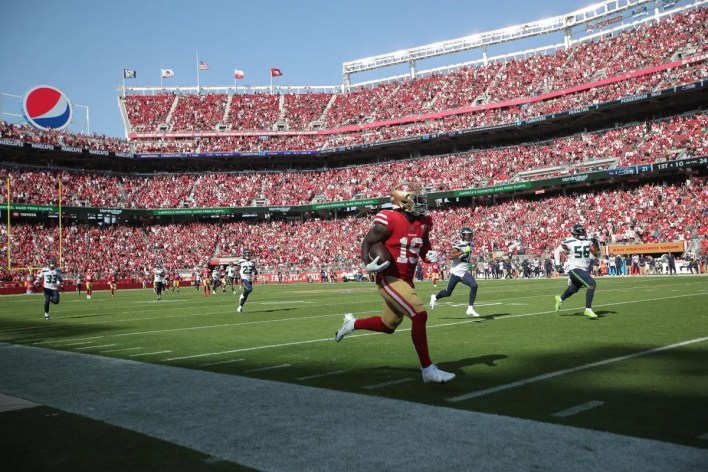 The San Francisco 49ers’ offense has not been the juggernaut many expected four weeks into a mediocre start to the campaign, but their passing game has performed efficiently and much of that is down to a third-year wide receiver on course for a career year.

Deebo Samuel endured a frustrating 2020 season defined by injuries, but the former second-round pick is bouncing back and doing so in style.

His 156-yard, two-touchdown display in San Francisco’s 28-21 defeat to the Seattle Seahawks in Week 4 took Samuel to a league-leading 490 yards on the season, putting him on pace for a 2,000-yard campaign.

Maintaining such a pace may be unlikely but, providing he stays healthy, Samuel is poised to easily surpass his career-high of 802 yards and, at this point in the season, has overtaken tight end George Kittle as San Francisco’s most valuable offensive weapon.

The 49ers are fifth in offensive Expected Points Added per play, according to Ben Baldwin of The Athletic, and rank fourth in dropback EPA.

Samuel’s contributions to San Francisco’s efficiency in that regard cannot be overstated.

Pass targets to Samuel in the season opening win over the Detroit Lions averaged 0.89 EPA per play. That tailed off 0.51 in the Week 2 win over the Philadelphia Eagles and 0.36 in the loss to the Green Bay Packers, but Samuel led all 49ers who had multiple pass targets in the defeat to Seattle with 0.86 EPA per play.

Targeted 42 times already, Samuel stands as San Francisco’s top safety net in the passing game. His passer rating when targeted is 130.1 while he leads all wide receivers with at least 20 targets with 9.6 yards after catch per reception, according to Pro Football Reference, his combination of speed and physicality making him one of the league’s most dangerous weapons in the open field.

Coming off two straight losses and heading to Arizona to face an undefeated Cardinals team fresh off scoring 37 points against the Los Angeles Rams, San Francisco will not be able to lean solely on Samuel to deliver the offensive production to get the Niners back to winning ways.

Yet regardless of whether the injured Jimmy Garoppolo or rookie Trey Lance lines up at quarterback for the 49ers in Week 5, Samuel is likely to be their number one target for much of the contest having consistently proven his ability to elevate the passing game.

Ideally, the Niners will want more from their running game while also spreading the ball to Kittle and Brandon Aiyuk, last year’s first-round pick in the midst of a sophomore slump. Head coach Kyle Shanahan excels at getting open looks for his quarterback so the other members of the supporting cast should continue to get opportunities to produce.

However, if the opening four games prove a harbinger of what is to come, then San Francisco’s offense is one that will run through Samuel in a 2021 season that could see him established as one of the elite at the receiver position.

Conversations From The Under 30 Summit, LeBron Makes A $725 Million Money Move & More: This Week In Young Movers And Makers