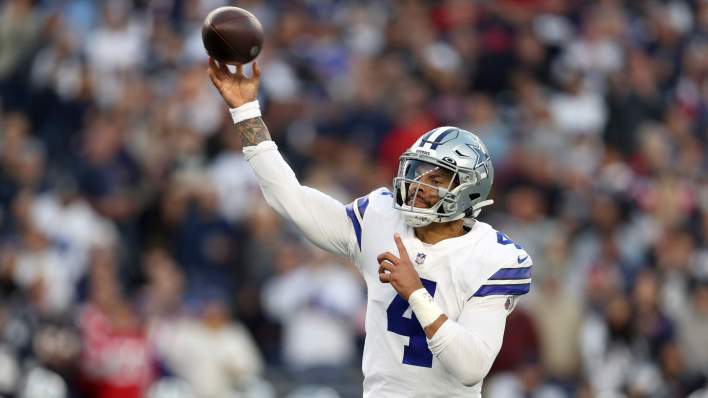 Dak Prescott’s status for the Cowboys’ next game — and perhaps more of Dallas’ season — is uncertain after he suffered an injury at the end of the team’s overtime victory over the Patriots on Sunday.

Prescott reportedly suffered a right calf strain on his game-winning touchdown pass to CeeDee Lamb in OT. He was helped by Ezekiel Elliott into the locker room after the game.

The scene as Dak Prescott was assisted to the #Cowboys locker room by Ezekiel Elliott with what team describes as a right calf injury. Timely bye week next for team. Quarterback to be further evaluated tomorrow. pic.twitter.com/f1yvpTBu02

Dallas’ starting quarterback is scheduled to receive an MRI on Monday. His timetable to return is unclear, although the Cowboys do have a bye in Week 7, which will allow him more time to recover. Prescott was in a walking boot as he met with with reporters after the game.

“I figure we’re not playing for a week, so I’d give you guys (media) something to talk about and speculate on.

“So there you go.” _ Dak Prescott pic.twitter.com/acJtETYgot

MORE: How Cowboys, Prescott came from behind twice vs. Pats

“I’ll be fine. I promise you that,” Prescott said, per Jon Machota of The Athletic.

Prescott has battled multiple injuries the past two years. He suffered a season-ending ankle fracture in Week 5 last season and then managed a right shoulder ailment that kept him out for the majority of 2021 preseason.

MORE: How Prescott came back from ankle injury better than ever

Prescott completed 36 of 51 passes for 445 yards and three touchdowns, with one interception, on Sunday.

After their bye week, the Cowboys are scheduled to face the Vikings on the road in a “Sunday Night Football” matchup Oct. 31.