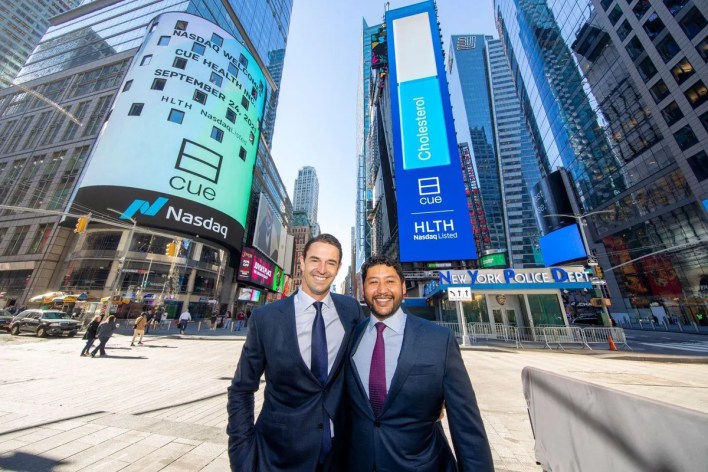 Covid-19 test maker Cue Health went public on Friday at a valuation of nearly $2.3 billion. Shares opened above the $16 price set the night before and closed at $20—a 25% increase in the first day of trading. The San Diego, California-based company’s Covid-19 test—which consists of a swab, test cartridge and battery-operated reusable reader about the size of a smartphone—delivers test results in around 20 minutes and automatically uploads them to a mobile app. It’s used by a wide array of customers, including the Mayo Clinic, the Pentagon and even the Iditarod race in Alaska.

“The company is very mission driven. We want to make healthcare information more accessible,” says cofounder and CEO, Ayub Khattak. Access to Covid-19 tests has been an ongoing issue throughout the pandemic. And Cue’s IPO comes as the CDC has warned of a temporary shortage of point-of-care and over-the-counter Covid-19 tests this week as the delta variant continues to increase case counts. Cue estimates the broader Covid-19 point-of-care market, meaning rapid tests administered by qualified medical professionals, to reach approximately $12 billion in 2021, according to its S-1 filing. On average, the company is manufacturing around 43,000 Covid-19 test kits daily.

While most other authorized at-home tests are antigen-based, meaning they test for the presence of a viral protein, Cue’s test is molecular. It tests for the presence of viral RNA, which means it can detect smaller amounts of the virus in a person’s system and provides more accurate test results in line with PCR tests, the “gold standard” of diagnostics. A study conducted by the Mayo Clinic found Cue’s test results to agree with PCR tests over 92% of the time in detecting Covid and over 98% of the time in coming to a negative result. Cue’s tests are authorized for use by both symptomatic and asymptomatic people and for anyone age 2 years and older.

Khattak, 36, and cofounder and chief product officer Clint Sever, 36, met more than a decade ago when Sever moved into the house next door in Los Angeles. Khattak, a mathematics major who worked in a biochemistry lab during undergrad at UCLA and Sever, who studied retail and consumer science at the University of Arizona, began talking about the swine flu pandemic, which was gripping the world at the time. It had parallels to the Covid-19 pandemic with people quarantined aboard cruise ships and emergency rooms being inundated. “It became pretty evident that there was a missing piece to the way that healthcare worked, which is, why is it so difficult to get diagnostic information?” recalls Khattak. “And so the solution in our mind was a really easy-to-use product that would be accurate and would be connected to the mobile phone. And then you could really make a difference in how people get information.”

The company, founded in 2010, was originally focused on rapid portable flu tests and was testing Cue’s technology in clinical trials when the Covid-19 pandemic hit. Cue quickly shifted gears and spun up a Covid-19 test, receiving emergency use authorization from the FDA for its point-of-care test in June 2020. The company had already been working with the Biomedical Advanced Research and Development Authority, known as BARDA, on its flu test, and entered into a $481 million contract with the US. Department of Defense and the U.S. Department of Health and Human Services to deliver 6 million Covid-19 test kits and 30,000 readers. In March 2021, Cue received FDA emergency use authorization for at-home use. The test is also authorized in Canada for both uses, and in India and the European Union for professional use. Cue has 49 customers, including the government, large employers, health systems and doctor’s offices. The company plans to sell tests directly to consumers on its website in the fourth quarter, says Khattak.

The IPO will generate around $200 million in proceeds, which Khattak says will go to what he calls “menu expansion.” One of the biggest benefits of the cartridge technology is that Cue users will be able to use the same reader to swap out for different tests once they hit the market. Right now Cue has five other test kits in late-stage development, which the company expects to begin submitting for FDA clearance in the second half of 2022: flu, RSV, fertility, pregnancy and inflammation biomarkers that could indicate risk of heart disease or chronic conditions. The company is starting clinical trials for flu and RSV in the near-term. And beyond the nasal swab, it will also be able to take blood, urine and plasma samples. “It’s got great range, which is what really gives it a big future,” says Khattak.

The huge ramp up in production has also resulted in a massive investment in hiring talent. Cue went from 100 people in early 2020 to around 1,250 employees today. “People see the longer term vision,” says Khattak, “which is that we can help make a difference in how healthcare is delivered by having connected lab-quality diagnostics in the home, and in the point-of-care, so that people can get information quickly and then act on it.”