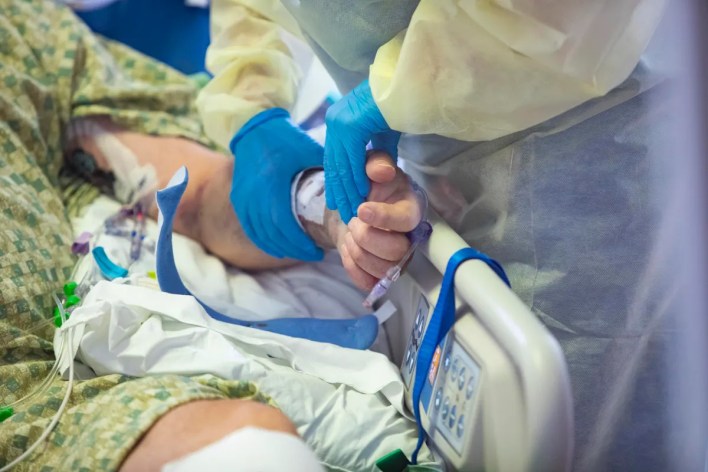 A slight decline in Covid-19 cases nationwide has masked spikes in infections and hospitalizations that have hit mostly Southern states in recent weeks, filling their intensive care units to dangerously near full capacity.

Nationally, 80.1% of ICU beds are occupied, and 27.18% of all ICU beds are filled with Covid-19 patients, according to data from the Department of Health & Human Services.

In 29 states, at least 80% of ICU beds were taken, according to HHS data updated on Saturday—the same share as a week before but with the addition of Washington, D.C.

That’s three fewer states than a week ago, although two states marked double double-digit increases in their share of occupied ICU beds: Wyoming (15%) and Alaska (14%).

In Alaska, which currently leads the nation in new Covid-19 cases per capita, fewer than 8% of the states’ ICU beds are available for new patients, while Wyoming has filled about 68% of its ICU beds.

The nationwide seven-day average of new daily cases on Thursday was 117,066, falling about 18% from 142,885 new cases a week prior, according to CDC data.

684,884. That’s how many people have died of Covid-19 in the U.S., which has the most deaths, and highest death rate, of any country, according to data from the CDC and Our World In Data. In the last week, 11,168 people have died in the U.S., including 2,112 people in Texas alone, the CDC reported. In Georgia, 901 people died in the last seven days, as well as several hundred people each in South Carolina, Arizona, Ohio and Louisiana.

The rise of the more infectious delta variant and fewer people getting vaccinated has helped Covid-19 cases surge through July and August. New deaths, which lag cases by up to a couple weeks, have risen through September. The number of new Covid-19 vaccine doses administered each day has fallen drastically after peaking in mid-April. Today just over 55% of the U.S. population is fully vaccinated, putting it below other wealthy countries including Canada, the U.K., France and Japan.

Full coverage and live updates on the Coronavirus

This Robotic Avatar Welds, Cuts, Lifts While Controlled By A VR Operator Over 5G