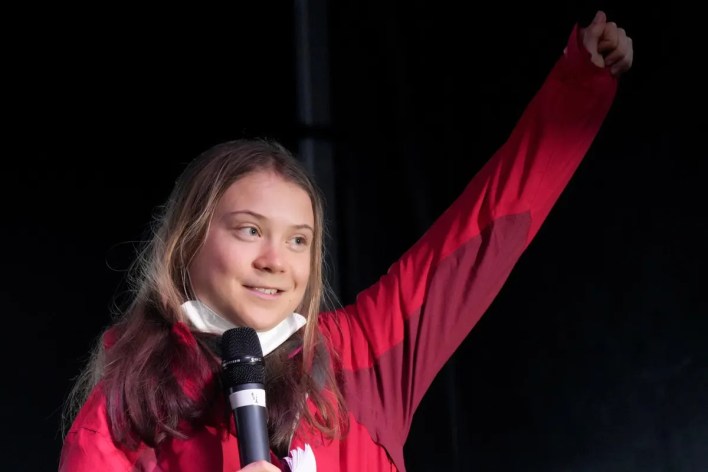 Some good things came out of the COP26 conference in Glasgow earlier this month; just not enough to render as wholly inaccurate Greta Thunberg’s assessment that the discussions at COP26 amounted to nothing more than “blah, blah, blah.”

To be fair, I think there were at least three important developments to come out of COP26. First, delegates managed to finalize what had been the unfinished business of Article 6, left over from COP21 in Paris: doing so has cleared the way for building a system to price and trade carbon globally. Second, China and the U.S., the world’s two largest GHG emitting countries, announced that they had agreed to cooperate on a range of climate issues. Third, the Glasgow Financial Alliance for Net Zero (GFANZ), a group of private financial institutions representing 40% of the world’s financial assets, pledged to meet the goals set out in the Paris climate agreement.

It is easy to understand some people’s disappointment about what the parties to COP26 actually accomplished. Consider COP26’s stated goal of keeping global temperature increases below 1.5 degrees Celsius relative to pre-industrial times. As COP26 concluded, its chair Alok Sharma stated: “We have kept 1.5 alive. That was our overarching objective when we set off on this journey two years ago, taking on the role of the COP presidency-designate. But I would still say that the pulse of 1.5 is weak.”

Some argue that this weak pulse is signaling a condition that is terminal because projects already funded, when undertaken, will absorb the remaining carbon budget associated with keeping 1.5 alive.

A critical tool for maintaining a clear-eyed view of the climate change landscape is the DICE model developed by Nobel laureate William Nordhaus. DICE is an acronym for Dynamic Integrated Climate-Economy. It is an integrated assessment model, built to analyze the interactions between the global economy and the global climate.

Nordhaus usually updates DICE every few years, but the most recent version, called the 2016 model, is from the end of 2015 when the Paris agreement was negotiated at COP21. Below I describe what the 2016 model predicts about temperature change generally and about goals such as 1.5 and 2.0 specifically.

The 2016 DICE model forecasts that the global temperature will cross 1.5 degrees just before 2035. This is pretty sobering. Even more sobering is that the preceding statement holds, according to the model, even if we manage to institute a global system today that would price carbon at its social cost.

The last statement is controversial, and critically depends on the phrase “according to the model.” The controversy involves whether instituting a global system for pricing carbon fails to prevent, but merely delays when the 1.5 crossing point occurs.

At the heart of the controversy is the fact that according to Nordhaus’ 2016 DICE framework, the optimal price of carbon, meaning the tax rate on carbon per metric ton associated with its social cost, currently resides between $35 and $40; and will rise above $50 by 2030. In contrast, other economists, especially Sir Nicholas Stern and Nobel laureate Joseph Stiglitz, argue that carbon would need to be priced at $100 by 2030 in order to keep the global temperature from exceeding 1.5 degrees, while simultaneously achieving net zero emissions by 2050.

Most estimates of the current global price of carbon lie somewhere between $2 and $20. The 2016 model predicted that the current price of carbon would be somewhat above $2.20. According to the IMF, carbon is currently priced at $3. According to a new study from investment firm Kepos Capital, taking full account of all taxes levied, and adjusting for subsidies, carbon is currently priced globally at just under $20.

The forecasts from Nordhaus’ DICE model have historically exhibited excessive optimism, which Nordhaus has documented in reports he has published in the Proceedings of the National Academy of Sciences. However, for the period 2016-2020, actual industrial emissions of carbon dioxide, at 35.9 Gt, were a bit lower than the DICE model forecast, at 39.4 Gt. The Covid-pandemic certainly provides one possible reason for the downward bias. Notably, had carbon been priced at its social cost during this period, the forecast stipulates that industrial emissions would have been 33.1 Gt.

The 2016 DICE model forecasts that even with carbon priced at its social cost, annual emissions will peak around the year 2050, at which time atmospheric carbon concentration will be about 517 ppm, and the global temperature will have risen by 2 degrees. It has been more than 16 million years since atmospheric carbon concentration was more than 500 ppm.

If the scenario just described is not already bad enough, it becomes much worse if there is a delay in pricing carbon at its social cost.

For contrast, consider how the long term emissions forecast developed by the consulting firm Wood Mackenzie compares to the one from Nordhaus’ DICE model. Wood Mackenzie refers to their best guess forecast as their base case, and it features emissions peaking around 2027, and then gradually declining thereafter. The Wood Mackenzie analysts point out that achieving either the 1.5 goal, or the 2.0 goal, would require emissions to decline much more sharply than they do in their base case, beginning around 2022 to achieve the 1.5 goal and around 2027 to achieve the 2.0 goal. Notably, the Wood Mackenzie forecast for the global temperature at the end of the decade lies in the range 2.5 to 2.7 degrees, well above 2.0.

There is an important reason why the estimate which Nordhaus provides for the trajectory of the social cost of carbon is lower than the estimate provided by other economists. Nordhaus built his model assuming that people would evaluate tradeoffs associated with climate change in much the same way as they evaluate other tradeoffs. By this I mean having a present-bias focused perspective when weighing the costs of consuming less today in order to provide the investment that will generate benefits in the form of even more consumption in the future. The assumptions used by other economists are a little different, in that they assume less present-bias than does Nordhaus, a perspective consistent with a longer term view of both human life on the planet as well as broader issues such as biodiversity.

Relatedly, let me mention that Nordhaus’ model treats climate-related damages as significant, but not catastrophic. This statement holds even for global temperature increases that are as high as 4 degrees, which the DICE model forecasts will occur during the next century. In this regard, the model predicts that the atmospheric temperature will peak at around 4 degrees in the year 2145, assuming carbon is priced at its social cost, beginning now.

The “beginning now” qualification is important, because a delay in pricing carbon at its social cost leads to a forecast for temperature change which is higher than 4 degrees. The model’s 2145 temperature forecast for a non-carbon priced economy is 5.5 degrees, on its way to 6 degrees and above by the year 2165, assuming that human life will be possible in such an environment. I say assuming, although the science summarized by Nathaniel Rich in his book Losing Earth suggests that even at 4 degrees, human existence will be in question.

These two types of imperfections are incredibly important. Their presence offers reasons to be both fearful, because of potential catastrophic damage, and hopeful, because of the major benefits future technology might bring.

Yes, there was progress in Glasgow on Article 6, on cooperation and coordination between China and the U.S., and on the backing of the financial sector for the Paris agreement. And yes, United Nations diplomats know that the rhetoric at most meetings far surpasses the accomplishments. Still, the agreement negotiated at COP26, while it points in the right direction, appears totally inadequate relative to the great challenge before us.

Perhaps the accurate characterization of what emerged from COP26 is blah, blah or to be more charitable, just blah.

3 Steps To Drastically Improve Your Relationships