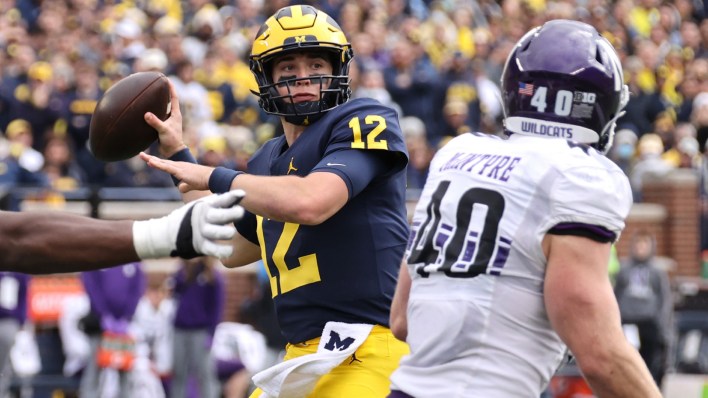 The spotlight is on the Big Ten in Week 9.

Two Big Ten East matchups are at the forefront. No. 6 Michigan travels to No. 8 Michigan State in the conference’s second top-10 showdown of the season. The Wolverines and Spartans have dueling 7-0 records, so the battle for the Paul Bunyan Trophy should be epic.

No. 5 Ohio State also plays No. 20 Penn State, which slipped down the rankings after a nine-overtime loss to Illinois. No. 10 Ole Miss travels to No. 18 Auburn in the third matchup involving ranked teams.

It’s a fun way to close out October. Each week, Sporting News picks every AP Top 25 game by the spread. Here is a look at our track record this season:

With that in mind, a look at this week’s picks:

Week 9 Picks Against the Spread

The Chanticleers are coming off a loss, and the last two games against the Trojans were one-score shootouts. Troy allows 94.6 rushing yards per game, and their worst loss this season is by 13 points. This is a close-call, but Troy hangs around just enough for the cover.

Pick: Coastal Carolina wins 38-21 and FAILS TO COVER the spread.

Tulane’s season has come unhinged after that near upset of Oklahoma early in the season. The Green Wave rank 128th in scoring defense at 42.3 points per game. They do have an all-in moment at home here, but the Bearcats need to pour it on ahead of the upcoming CFP rankings. Cincinnati is 5-2 ATS this season.

The Wolverines and Spartans have split the last eight meetings in East Lansing, and Michigan has won the last two. Michigan State has the worst passing defense in the Big Ten, but will Jim Harbaugh trust Cade McNamara to throw the ball enough down the field? It’s tight into the fourth quarter, but the Wolverines improve to 8-0.

Wisconsin has won four of the last five meetings, and the Badgers could still put themselves in position to win the Big Ten West with a victory against the Hawkeyes. This feels like a defensive slugfest, and either Graham Mertz or Spencer Petras will need to make a handful of big-time throws. The Hawkeyes bounce back.

The Bears have the top statistical offense in the Big 12, and Dave Aranda has instilled the defense to match. Both teams excel the running game, and this should be your classic Big 12 shootout of the week. The Longhorns finally win a close game.

The Panthers are riding high behind Heisman Trophy contender Kenny Pickett, and they are 6-1 ATS this season. The Hurricanes, however, are coming off a season-saving victory against N.C. State. Miami is 2-1 ATS as an underdog. There is value here, too.

This is a lot of points for a road favorite, but the Cyclones have shaken off their early-season struggles to get back in Big 12 contention. Iowa State has won the last three meetings by an average of 25.3 points per game.

Both teams are coming off a bye week for this rivalry game. Georgia can clinch the SEC East behind that ridiculous defense, but Florida had an extra week to prepare. Will Anthony Richardson throw a wrinkle into this matchup? For all the quirkiness of this rivalry the last six years, the favorite has won and covered. Make it seven in a row.

The Red Raiders have enjoyed a solid season with the exception of blowout losses against TCU and Texas. Oklahoma is back home, and the perception game remains a mixed bag after the scare at Kansas in Week 8. Oklahoma is 2-5 ATS this season, but it barrels into the bye week with a blowout victory.

The Buffaloes are 1-3 ATS as an underdog this season, with the lone cover the bizzarro game against Texas A&M in September. The problem here is the Ducks are 0-5 ATS as a favorite this season. Colorado can play into that, even with a bad offense.

Pick: Oregon wins 37-13 but FAILS TO COVER the spread.

This is Wake Forest’s first double-digit spread against a FBS opponent this season. The Demon Deacons have a high-powered offense, and the Blue Devils have been outscored 127-34 in their last three ACC losses.

The Rebels are a road favorite at Jordan-Hare Stadium. Auburn has won the last five meetings in the series, but the last two were decided by seven points or less. It’s an entertaining quarterback matchup between Matt Corral and Bo Nix. Lane Kiffin keeps Ole Miss in the mix for a New Year’s Day Six bowl.

The Jayhawks are 1-5 ATS as an underdog, but the cover against Oklahoma is fresh in mind. Will Oklahoma State come out focused after a deflating loss at Iowa State? It’s just a huge line, and maybe it’s recency bias. We like Kansas to do just enough to cover. The spread has dropped a point from the opening line.

Pick: Oklahoma State wins 38-14 and FAILS TO COVER the spread.

It’s a huge game in the AAC between rival schools in Texas. The Mustangs have won the last two high-scoring affairs, and they have a top-10 offense led by Tanner Mordecai (29 TDs, 7 INTs). It’s a tough spot on the road, but we like SMU to push through it. The over (62.5) looks good, too.

The Wildcats won this matchup 24-2 in Lexington last year. The Bulldogs will be better this time around, but Kentucky had a week to refocus after the Georgia loss. This could get wild, and that’s why it’s a pick-em line. The home team has won the last six meetings, but we’re going against the trend.

This is a huge line knowing the Buckeyes have won the last four meetings in the series by an average of 6.5 points per game. The last two night games at Ohio Stadium were blowouts, however, and the Buckeyes have hit a different gear on offense. The Buckeyes cover for the fifth straight week.

The Tar Heels had an extra week to prepare, and they will look to turn the tempo up on the Irish on the road. This is North Carolina’s second true road game of the season, and the Irish are picking up in the running game around Kyren Williams. This line is going to tick up for Notre Dame. Catch it now.

It’s the Bronco Mendenhall Bowl. The Cavaliers are making the long trip to Provo, and they have won wild shootouts at Miami and Louisville this season. Virginia is on a four-game winning streak, and the Cougars are 1-2 ATS as a single-digit favorite this season. There is value in Virginia here.

This is worth staying up late for. The Aztecs’ pass defense will be tested by Jake Haener, and Greg Bell will try to get going against a tough Fresno State run defense. This feels like a defensive struggle, and the Aztecs are built for those at home.

Pick: San Diego State wins 24-21 in and COVERS the spread.