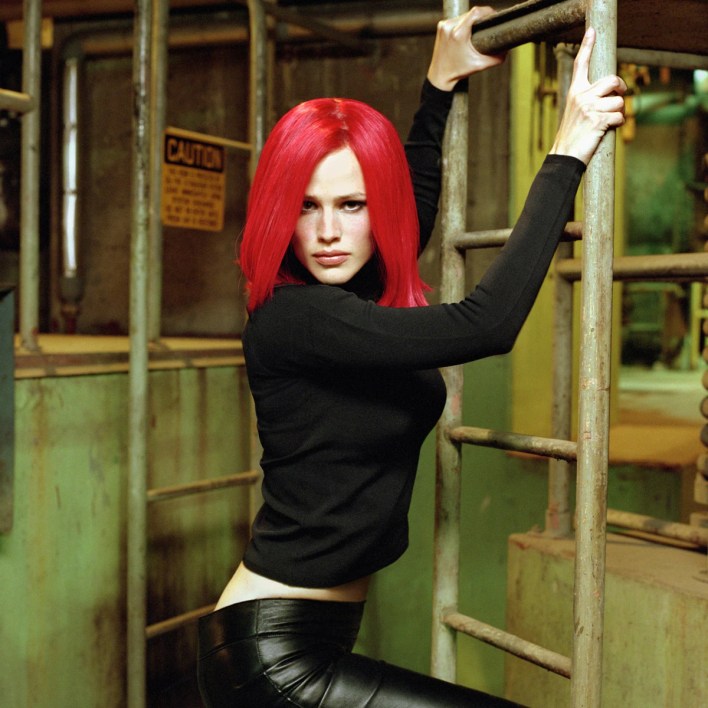 Obviously Garner followed quite the regimen to stay in fighting shape throughout her five years on Alias, courtesy of celeb trainer Valerie Waters, who simultaneously prepared her for 2005’s Elektra, which Garner shot during a hiatus from her show. Needing to be in hair and makeup by 5:30 a.m., she’d wake up at 4 a.m. for a 60-minute full-body workout, warm-up to cool-down.

But Garner was pragmatic about fitness from the beginning, telling E! News in December 2001 about the demands of playing Sydney, “I love it, because it forces me to take care of myself physically. And normally working hours like this you would really let that fall to the wayside. Not that I’m great about it, but pretty much, you know, I have a fight right now and so this morning I got up at 4 to run for half an hour. It just keeps you honest with it, because you have to be warmed up and you have to be in good shape, or you’ll get hurt.”

Even Sydney’s smooth, confident stride took practice, with Waters helping her straighten her walk while strengthening pretty much every muscle in her body. “She’s worked on me,” Garner explained to USA Today in 2002. “In real life, I have kind of a ducky walk. That’s just me trying to be as kick-ass as this chick deserves to be.”

She also studied with taekwondo grandmaster Byong Yu, and has been a fan of kickboxing workouts ever since.

“Her work ethic is just incredible,” Waters, who’s been Garner’s go-to trainer for the better part of 20 years now, told InStyle in 2014.

Dave Grohl: My whole life is like an out-of-body experience

The Shark Is Broken: Jaws feud was ‘legendary’

Dave Grohl: My whole life is like an out-of-body experience

The Shark Is Broken: Jaws feud was ‘legendary’